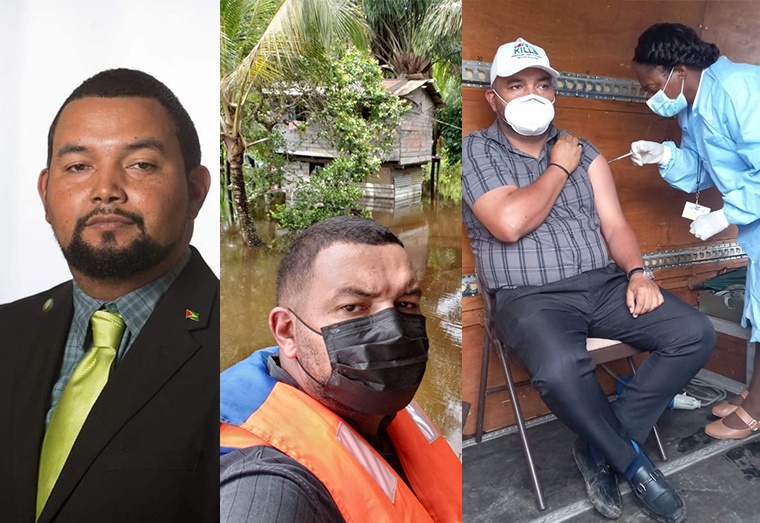 …Harmon promises to honour his legacy

Vice Chairman of Region 10, Douglas Gittens passed away on Sunday due to the Novel Coronavirus (COVID-19). The news which has left the mining town of Linden in shock was confirmed by the Regional Democratic Council, Region 10.

Gittens tested positive for the virus on June 11, 2021, 16 days after taking his first dose of the COVID-19 vaccine and was immediately admitted to the Upper Demerara Hospital.

With the aim to assist in flood relief efforts, Gittens had traveled to sub-region 2 including Kwakwani for which he holds direct responsibility, on June 2 and later reported feeling unwell.

The 38-year-old was born and raised in Linden, Region 10 and grew up with his mother. He got involved in politics in 2011 and has served as the Vice Chairman of the People’s National Congress Reform,Linden branch; member of the Regional Democratic Tender Board, Chairman of Culture Youth and Sport Committee, Chairman of Agriculture Committee, and Chairman of Information Management Committee, Region 10.

Apart from politics, Gittens has been a teacher for the past 19 years at his alma mater, the Mackenzie High School and has been consistently named the best CAPE teacher over the past 10 years. Gittens taught Caribbean Studies, Communication Studies, Sociology and History. His teaching career came to a pause in September 2020 when he was elected Vice Chairman of Region 10.

Gittens was working towards becoming the President of Guyana in the next two decades and strongly believed in connecting with the grassroots in order to correctly represent and address their concerns.

In a press release the Chairman, councilors and staff of the Regional Democratic Council, Region 10 expressed their condolences to the family and friends of Gittens.

“The Chairman, Councilors and staff of the Regional Democratic Council (RDC) of Region 10 mourn the passing of Regional Vice Chairman Douglas Gittens, and extend sincerest condolences to his relatives and friends,” the release read.

The release went on to say, “Vice Chairman Gittens is remembered as a very friendly and approachable person who shared his affable character in interactions with persons from all walks of life and in communities across Region 10.”

Leader of the Opposition, Joseph Harmon in a release on the passing of Gittens described the young leader as a “tireless worker and fastidious Vice Chairman” who devotedly served the people of Region 10.

Harmon states: “His positive personality and contribution to the advancement of Region 10 will be sorely missed and the void he leaves will be a challenge to fill.”

The Mackenzie High School also made a statement saying, “Today, as a family, we are once again hurting and full of grief. We have lost our brother, friend and colleague in the person of Regional Vice-Chairman Mr. Douglas Gittens.”

Countless of other persons including past students, friends, colleagues and relatives have also took to social media to express their condolences.

Residents of Region 10 have been hesitant to take the COVID-19 vaccines. Hence, Region 10 has recorded a low vaccination rate, with only about one-third of the adult population being vaccinated.

Mon Jun 14 , 2021
Support Village Voice News With a Donation of Your Choice. …to major in Civil and Environmental Engineering …says mechanisms should be in place to assist top students accepted to overseas universities  By Lisa Hamilton Moriah Hamilton, a 19-year-old former student of Queen’s College, is seeking financial assistance to guarantee her attendance at the Howard University in the United States for […]