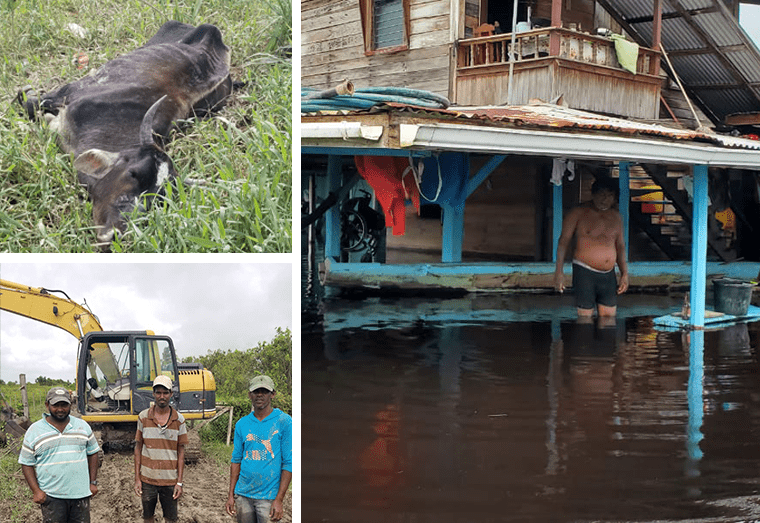 …farmers say water keeps rising …hundreds of cattle dead, millions of dollars in cash crops destroyed By Svetlana MarshallLocated along the Mahaica Creek, Little and Big Biaboo are among communities hard-hit by the current floods with farmers indicating that hundreds of the cattle and livestock have died and millions of dollars in cash crops destroyed. When Village Voice News visited the communities last Wednesday, cattle farmers in Little Biaboo were in the process of moving their cows to higher ground even as some laid helplessly in slush of mud.“We are just loading them up in the truck because the water raise here, and we are taking them to Lusignan. We move like 120 already and we get like 40 more to move,” Astaf Hack told Village Voice Newspaper.  Hack and two other cattle farmers had begun the process of relocating the cows a day prior.

He said while the owner of the cattle has managed to save the majority, at least six of the cows have died. “Some get weak, some die, if you look at the side of the road, it get two or three lie down deh, musi the last lap,” another farmer said.   Mahesh Mahadeo – another cattle and cash crop farmer, who was among those helping to transfer the cattle to Lusignan – told Village Voice News that farmers have come together to assist each other.  “All ahwe ah wuk with this man here to help he with he cow. All ahwe get cow, so all ahwe come together to help one another,” Mahadeo said.He explained that due to incessant rainfall, the cow pens have been inundated with water, and though they have attempted to move the cows to dry land, the mud has proven to be a challenge.“If you look at the mud, the mud in the pen, they can’t take the mud. When dem standing in the water dem ah get weak, and when them come on the mud dam, they can’t able stand up in de mud, them a drop down,” Mahadeo explained.  Mahadeo said while his colleague in Little Biaboo has managed to bring out his cows to a mud dam to transport them to Lusignan, he is not so lucky. “Ahwe cow deh a good way up the river in Big Biaboo…ahwe cow deh a swim in wata,” he said. Mahadeo said there is not much he can do. “The rain, ahwe can’t do nothing because ah God wuk. Because of the rain, the mud in the pen, the cows can’t tek the mud,” he posited. Additionally, he said all of his cash crops have been destroyed. “All ahwe crop duck out, ahwe had 3,500 bora, bearing bora, duh duck out; ahwe had 1,500 tomati some now starting giving flower, some three weeks old, all duck out; ahwe had pear tree, celery, lil peppa, all thing duck out,” he explained. Another farmer, 38-year-old Kamaludeen Hussein told Village Voice News that he too has suffered losses. “I had some crash crop to, some rice, and I had some goat as well but plenty of them, bout 40 or 50 of the goat dem already die,” he explained.Worst floodIn Big Biaboo, houses, farms and vehicles including a tractor were seen under water. A 63-old man, who identified himself by his alias ‘Diamond,’ said this is the worst flood he has ever experienced. The lower flat of his two storey house was covered in water. “The water keeps rising,” he told this newspaper, while noting that he was left with no other choice than to move his furniture and appliances to the upper flat to avoid damage.

The farmer said his farm has been severely affected for the past two weeks. “[I plant] like cabbage, bora, tomato, pepper and everything under water, not me alone, everybody,” he said. Another resident Moldeo Tillack said the flood is largely as a result of the heavy downpours. Tillack said 40 acres of rice, which he had under cultivation, have been damaged. He told this newspaper that many of the younger men have gone in search of alternative work since their homes and farms are under water. “Nuff young boys left and gone search fuh wuk ah road because who dem gun depend pun,” he said while noting that some families have also evacuated. Pointing to his tractor, which was also under water, Tillack said he too has been hard hit. “Watch me get a tractor there, it duck down, watch me get a car there it duck down, but where I gun go, you can’t go nowhere because of the COVID virus. Is best you take your punishment and stay right here,” he said.Other farmers in the area complained that their pear trees, which take between three to four years to develop and acres of bora, boulanger, pepper, celery and other crops have been destroyed. The farmers said while the Government has provided equipment and other resources to alleviate the flooding situation, they are hoping to receive financial assistance to salvage their farmlands and restart their farming activities whenever the water recedes. Ali’s visitOne day before Village Voice Newspaper visited the flood affected communities, President Irfaan Ali had led a delegation into the area. According to a statement issued by his Office, President Ali assured the residents of Big Baiboo that he will do all in his power to help them and the other communities throughout Guyana affected by the current floods.

The immediate needs, according to the President, are food, shelter and access to health facilities, while systems are currently being put in place to allow more long term solutions.“We’ll be having a comprehensive assessment; our priority is to see all possible ways in which we can get the water off this land as quickly as possible…We know the medium and long term issues have to be dealt with and those issues include how do we get back to the farm. The losses you have occurred and how the Government will help you to get back on your feet again,” the Head of State told the residents. Based on the advice of the Civil Defence Commission (CDC), President Ali has declared that flooding in Guyana is now a Level 2 Disaster.

Sun Jun 13 , 2021
Support Village Voice News With a Donation of Your Choice. …even as new Covid infections spiral  out of control …252 men die thus far from virus A total of 26 deaths have occurred in the first 11 days of June with as many as five deaths occurring on June 6, 2021. There were also 4 deaths each occurring on June […]