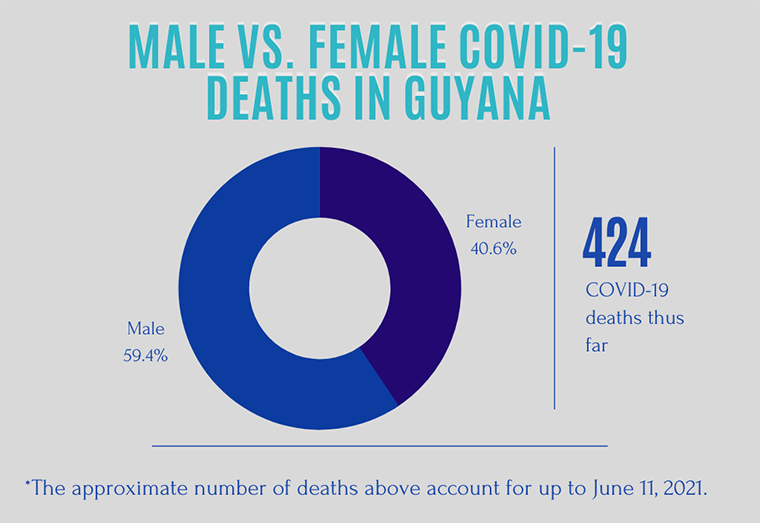 The deaths, as reported by the Ministry of Health, bring the most recent figure to 424 deaths. Of that figure, males continue to die at a greater rate than females with just over 252 males succumbing compared to just over 172 females.

The number of men dying from COVID-19 in Guyana has consistently outnumbered the females though for the first 11 days of June 15 females have died compared to 11 males.
According to research conducted by the Center for Disease Control (CDC) in the United States, male COVID-19 patients are more likely to be hospitalized and have higher all-cause mortality than female counterparts. Males also recorded a higher prevalence of diabetes, hypertension, coronary heart disease, obstructive pulmonary disease, nicotine dependence, and heart failure.

Added to this, the study showed that, compared with women, men tend to engage in more high-risk behaviours that generate the potential for contracting COVID-19. However, the sex gap in COVID-19 associated mortality is not easily explained by any single biological or social factor.

For all COVID-19 cases collectively, Region 4 holds the highest number at over 8,584. Region Four is followed by Regions Three, Six, Ten, Seven and One. The Region with the least number of cases is Region Eight at 370, followed by Region Two at 510 and Region Five at 629.

As the month continues, as of June 12 there were 21 persons in the COVID-19 ICU and 107 new cases. While there have been over 18,030 confirmed cases in the country, the Ministry has noted that over 16,200 persons have recovered with the difference catered for those who have died, are in quarantine or isolated.

Mon Jun 14 , 2021
Support Village Voice News With a Donation of Your Choice. ..Dr. Carpen says those who do so endanger themselves Recently, the Guyana Police Force (GPF) announced an investigation into an alleged forgery of a COVID-19 vaccination certificate by a woman who falsified the signature of a health worker on the card. There have also been rumours of other such forgery […]