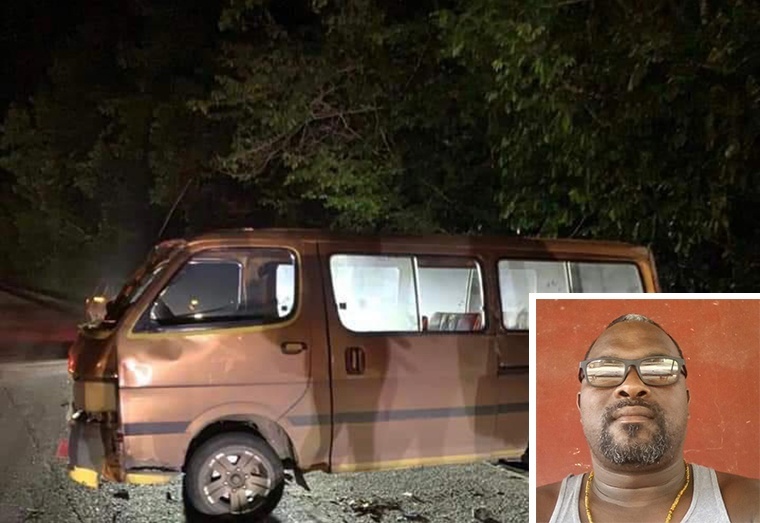 A newspaper distributor who services the East Bank to Linden route, Mark Ault was killed in a accident on the Soesdyke-Linden Highway Sunday evening.

Police said in a release that Ault was proceeding north along the western side of Dora Public Road Soesdyke Linden Highway.

As a result of the collision the driver of the minibus and the occupant of motor car PLL 3486 received injuries about their bodies.
Ault was picked up in an unconscious condition and taken to a hospital where he was seen and examined by a doctor on duty and pronounced dead on arrival.
The driver of motor car # PLL 3468 and occupants Akeemo Elliot and Candace Gordon were picked up in a conscious condition by public spirited-citizens and the police and taken to the said institution where they were seen and examined by a doctor on duty. The occupants of cars are hospitalized.

The driver of motor car #PLL 3468 was then referred to the Georgetown Public Hospital Corporation, where he was seen and examined by a doctor on duty and admitted in the male surgical ward suffering from a fractured pelvic and spine.

Things are falling to pieces

Mon Jun 7 , 2021
Support Village Voice News With a Donation of Your Choice. President Irfaan Ali has admitted that “Guyana is facing the worst natural disaster in its history.” Many Guyanese knew this and are relieved the president has acknowledged what has been known for a while and felt as though the government has been ignoring the problems. Things are falling to pieces. […]