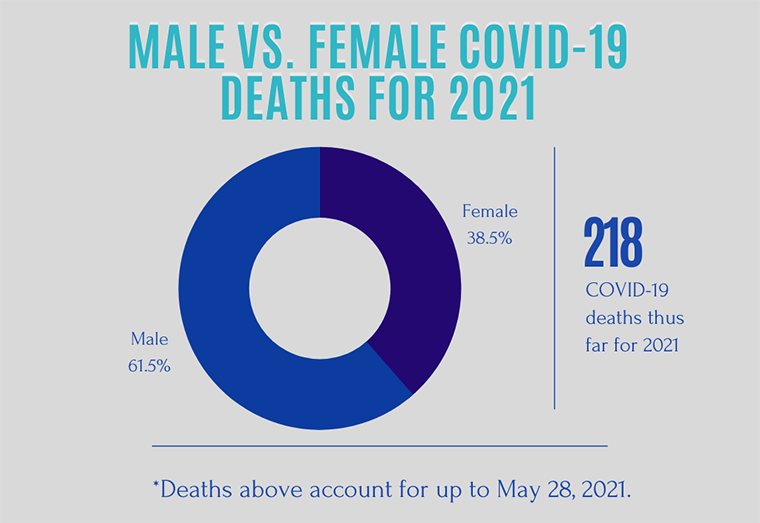 Guyana recorded 21 COVID-19 deaths between Sunday, May 23 and Friday, May 28, pushing the total number of deaths for the month thus far to a whopping 83 — the highest number of deaths experienced in one month for the country.

“COVID-19 is real and it has touched us in a really devastating way,” Head of Medical Services and Cardiology at the Georgetown Public Hospital Corporation (GPHC), Dr. Mahendra Carpen said in his recent update to the public. “This is frightening, this is devastating and we continue to have large numbers of persons testing positive. This is something that concerns us all, this is something that is all of our business. We have to continue to take measures and put systems in place so that we minimise exposure.”

Overall, comparing 2020, which recorded 164 deaths, to 2021, which has recorded 218 deaths thus far, there has been an increase in deaths by 32.9 percent. This is even as there were 98 new cases last reported with 22 persons in the COVID-19 ICU.  As of May 28, a total of 49 males died from the virus while 34 females died. The youngest person to die for the month was 17 years old while the oldest to die thus far was 87 years old.

As of May 27, 2021, Minister of Health, Dr. Frank Anthony reported that 191,151 people have received the first dose of the COVID-19 vaccine which represents some 39.3 percent of the adult population. Meanwhile, 12.9 percent or 62,610 of the population have received the second dose.  He urged more Guyanese to get vaccinated to improve their chances against the virus should they become infected. “Vaccination prevents deaths. Vaccination is a way of reducing the burden of disease and also preventing deaths…the more people that get vaccinated then the faster we can prevent the deaths that are currently occurring,” Dr. Anthony said.

Meanwhile, males in Guyana continue to record a higher number of deaths to COVID-19 than females. Based on information provided by the Ministry of Health on all COVID-19 deaths for 2021, 84 females have died while 134 males died. This represents a percentage of 38.5 females to 61.5 males, a pattern that has continued similar to figures in 2020.

According to research conducted by the Center for Disease Control (CDC) in the United States, male COVID-19 patients are more likely to be hospitalized and have higher all-cause mortality than female counterparts. Males also recorded a higher prevalence of diabetes, hypertension, coronary heart disease, obstructive pulmonary disease, nicotine dependence, and heart failure.

Added to this, the study showed that, compared with women, men tend to engage in more high-risk behaviours that generate the potential for contracting COVID-19. However, the sex gap in COVID-19 associated mortality is not easily explained by any single biological or social factor.

“In summary, a range of biological, psychological, and behavioural factors can explain why men have higher rates of COVID-19–associated morbidity and mortality than women. Although it is critical to identify the factors associated with increased risk for men of COVID-19 mortality, it is equally important to determine how to reduce the risk of men dying of COVID-19. The factors that exacerbate men’s risk also are intertwined with race, ethnicity, geography, and other proxies,” the research concluded.

Head of Medical Services and Cardiology at the Georgetown Public Hospital Corporation (GPHC), Dr. Mahendra Carpen has stated that, for Guyana, it is important that as many persons as possible are vaccinated as it is the best chance at a return to some form of normalcy. Of the two ways to develop immunity — to get the disease and recover or to get vaccinated — he said that vaccination is the safer option.

Woman crashes into GPL pole, fence and landed in a nearby trench

Sun May 30 , 2021
Support Village Voice News With a Donation of Your Choice. A Corentyne woman was Sunday evening rushed to a medical facility after she lost control of the vehicle she was driving and skidded off the #50 Public Road, slamming into a GPL utility pole and then into a yard before coming to a halt. According to an eyewitness, the young […]