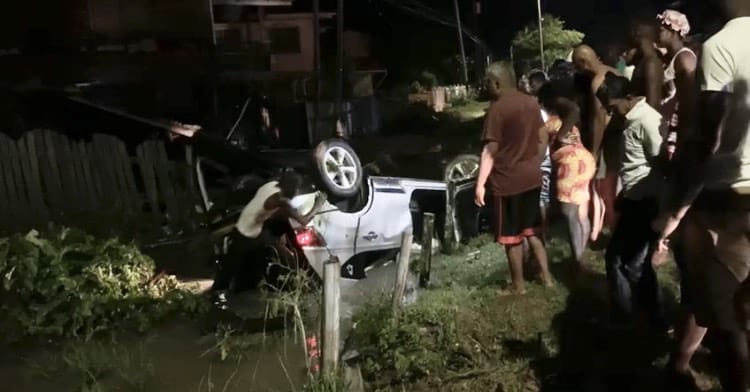 A Corentyne woman was Sunday evening rushed to a medical facility after she lost control of the vehicle she was driving and skidded off the #50 Public Road, slamming into a GPL utility pole and then into a yard before coming to a halt.

According to an eyewitness, the young woman swerved from two men who were at the time walking on the road. However, she tried applying brake but quickly lost control of the vehicle.

“Them boys were walking on the road and like she try to swerve from them and she draw the brakes and lose control of the vehicle and end up on the side of the road. When she end up at the corner, the vehicle  start flipping and then the grass was wet so she knock down the pole and then I don’t know how she end up knocking down them people shed and the car pitch back into the trench,” the eyewitness said.

According to a relative, the 25-year- old driver whose only name was given as Varsha was at the time heading to #50 Village to pick up her younger brother.

The young woman was pulled out from the wrecked car in a conscious state and taken to the hospital for medical treatment. It is unclear at this time what her injuries are.

Meanwhile, Feroz Khan owner of the house which the young driver crashed into said he is thankful that his children who were at the time in the hammock did not receive in any severe injuries. He noted that when he heard the loud impact, he ran outside only to find his children in a state of shock and crying.

“When the car run in the yard, I run outside and I see them in the hammock and the whole shed come down so I run and scramble them and ask them if everybody okay and what happened ,” Khan recounted.

Khan noted that while his children are alive, he is now left with major expenses as the car crashed into the yard; damaging his fence, place of worship and even his shed.
“When she crash in the yard, everything come down. From the church to the shed, everything bruk down and the whole place shake up. Even them window upstairs all bruk up.”

Is Jagdeo telling the truth?

Mon May 31 , 2021
Support Village Voice News With a Donation of Your Choice. Dear Editor I have noticed members of the Coalition labeling Mr. Jagdeo as a Pathological Liar and being the student I am, I had to take a closer look. Studies and behavioural experiments have shown that facial expression and bodily expression are congruent in terms of conveying visible signs of […]