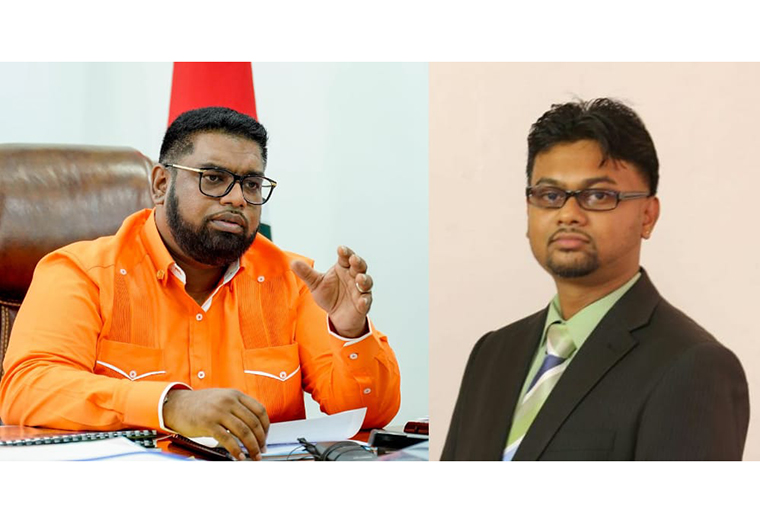 President Irfaan Ali said on Tuesday that his government will not continue to transfer money blindly to the Georgetown Mayor and City Council (M&CC) without an assessment that determines how the Council managed the resources previously bestowed to it.

In his Government’s opinion, Georgetown has been mismanaged for years and though Georgetown Mayor, Ubraj Narine has called out the Central Government for withholding funding from the M&CC since it took office, President Ali said that financial accountability, on the Council’s part, must come first.

He pointed to Section 177 of Chapter 28:01 of the Laws of Guyana, which states that the Council is required to prepare accounts yearly and submit the same for audit no later than four months after the end of the year. However, he said that M&CC has breached this provision and continues to do so.

He highlighted that in 2004, in the last audited financial statement, a disclaimer of opinion was issued by the Auditor General which meant that the information submitted could not stand up to scrutiny.

He added that as recently as March of 2021, a special audit commenced and similar issues were uncovered with regards to the NIS, GRA, and monies not paid over.

“All of these were issues highlighted, where transparency, accountability and clear violations and breaches we found, yet, Central Government continues to transfer resources to the city. But how long must we, as a people, and as a Government allow this blatant disregard for transparency and accountability, this blatant disregard for the rules and laws governing the financial accountability of the Mayor and City Council? There must come a time when things will come to a head and these things have to be fixed. We cannot continue this level of mismanagement,” the President said.

In a recent interview with the Village Voice News, Mayor Narine — elected Mayor in 2018 — opined that the city of Georgetown is intentionally being stifled under the current Administration.

He further cautioned that should the Government continue to withhold funding from the Council, Georgetown will be crippled and citizens must look to these leaders for answers.

Areas that have been affected by the withholding of funds include some $40M in budgetary subvention for 2020 and 2021 collectively; the Government’s payment of $100M in advance taxes to City Hall pledge by the President and the stipend of the Mayor and Deputy Mayor. In turn, according to Narine, this affects garbage management, COVID-19 mitigation efforts and more.

Narine said he understands that his political views and that of the Government do not align but he has no issue working with the Government of the day as it is the people of Guyana that must come first. Should such a disconnect continue, he predicted that the capital city will be crippled and the citizens of Guyana will feel the sting — a risk he doesn’t take lightly.

However, in the statement on Tuesday, President Ali said that his Government wants the best for the city and wants to share “nothing short of an excellent relationship with the city”. Even so, he emphasized that the Government will not be blamed for the City’s mismanagement nor will they disregard such and continue to transfer money blindly knowing of all of the irregularities.

“Let me be very clear, this Government cares tremendously about our city, but we will not allow ourselves to be used as a scapegoat in the city not fulfilling its responsibility and mandate or in the city converting everything into political opportunism or a political football. As President, we’re not going to allow the Mayor to get away with a statement like this,” he said.

“Notwithstanding all of this, we are moving forward with a plan and programme to improve the welfare, well-being, living conditions, and standard of the people of the city and those who use the city and we are sparing no resources in achieving this.”

The President reiterated that though the Government believes that the City is not fulfilling its responsibilities in the maintenance of the environment and its infrastructure and the cleaning of drainage, Central Government has embarked on a massive programme to clean the city, to clean and maintain the roadways, establish roundabouts, and maintain drainage.

He also pointed to the array of programmes already implemented to engage communities in the cleaning-up of various wards in the city, including South Georgetown, Sophia and Albouystown. The President added too that the Government is fully committed to ensuring that City Hall is restored.

Wed May 26 , 2021
Support Village Voice News With a Donation of Your Choice. The Guyana Telephone and Telegraph Company (GTT) has sponsored building décor for the Ministry of Health – Disability and Rehabilitation Service Centre at its Croal Street, Georgetown location in observance of Independence Day. In a release, it was noted that GTT’s Marketing Communications Manager, Nicola Balram assisted the team in […]