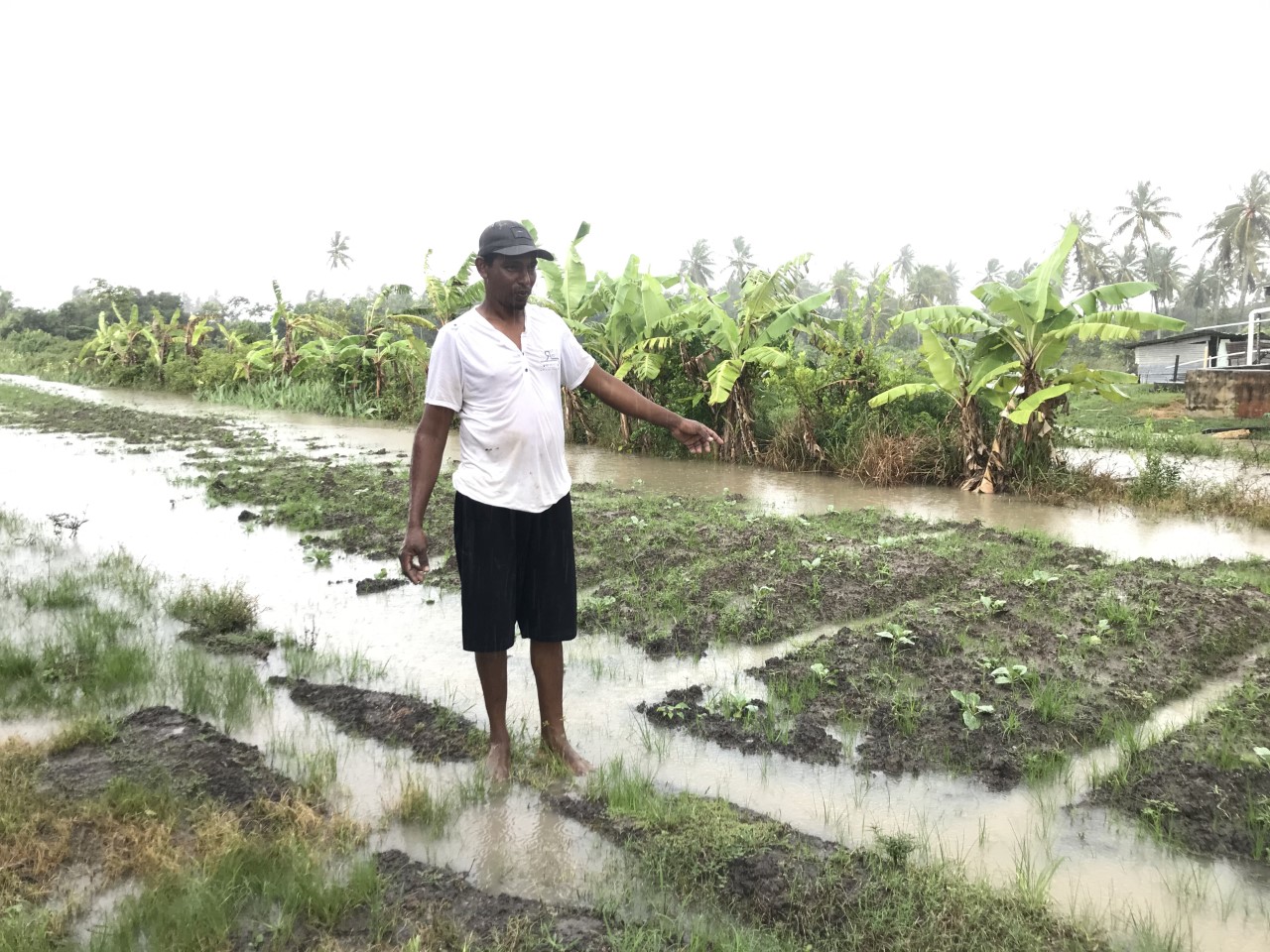 Black Bush Polder has been under water for several days due to heavy downpour and residents are beginning to fear the worse as the water continues to rise.

Several cash crop and livestock farmers have incurred major losses with the heavy flooding and are hoping that the relevant authorities can render some assistance. The residents are complaining about the drainage system in the area and said that even though it is common to experience heavy rainfall and to some extent flooding during the May/June period, they have never experienced such major flooding for the longest while.

Both cash crop and livestock farmers have suffered tremendous losses as several of their livestock died and thousands of crops which have reached the reaping stage are now submerged under water. Jagdesh Jaddunauth, a cash crop farmer of Lot 48 Mibicuri South, Black Bush Polder said it has been more than a week since the rain is falling and his yard has been covered in flood water. The distressed man noted that he cannot begin to count the amount of losses he suffered over the past days, as millions worth of crop remains under water. Jaddunauth said he planted peppers, celery and cabbage in his garden but incessant rain and flooding has not allowed him to even save part of his crop.

“Celery a pick right now, I get about 3000 root of pepper that deh on picking stage and 5000 root cabbage and everything damage, all my crops duck. Now is the time to get the price for these crops because how the weather deh and with the price for celery now, I woulda make about 1 million because is a lot I plant. Even cabbage get the price now and that woulda been about $5 or $600,000. We spend so much already on them crops this with the seed and fertilizer and drug and so and now for this to happen is real hard on us.”

Jaddunauth said he cannot process what his next move will be but is hoping that the water recedes quickly. He noted that the entire area is flooded and if something is not done to drain the water from the nearby trenches and canal, then the water from the yard and their farms will not drain.

“We set pump all to drain the water from we farm but it can’t pump and go no way because all over duck out. Nobody from the higher level didn’t even come in and see what is happening with us in here and how we suffering. They nah even dig them drains before the rainy season and the pump wah them have there, break down so no water nah pump out.”

Jaddunauth said farming is his main source of income and together with his wife, they plant and supply crops to market vendors.

Meanwhile, a single mother said she is frustrated and at a loss for words with the current situation she is facing due to the flood. She said it has been over a week since her farm is under water and no one has reached out to her or even visited the area to assess the situation. She noted that just a few days ago she lost some of her livestock and her crops are completely submerged.

“I am tired complaining because I complained in the past and nothing has ever been done. If we suffer in here. It doesn’t matter to those in authority and so it really makes no sense I talk about it. I had beans and pepper and everything under water. About 2000 pepper plants I had and everything just gone. I does pick the pepper by myself and them trucks does come and buy them.”

The woman said, recently a team was sent in to the area to dig the drains but the work was poorly done and as a result, they have suffered again with the flooding due to continuous rainfall.

Amzad Ali a cash crop and livestock farmer of Johanna North, Black Bush Polder said he is hoping that the relevant authorities can take control of the situation and find a way for the water to start draining. The man said he owns two farm both of which are currently under water. He plant crops such as ochro, bora, beans and a variety of peppers. Ali estimated his losses to be over one million dollars as he lost about 5 sheep over the past days.

“I had to put paddy shell in them pen for the sheep them to get good rest. I had to move my chicken them and put them in the verandah. It’s very difficult for us here during this time. It would be good if those in authority can help we get back some money or couple sheep or livestock or something to help we get back up again. If them can get the main trench clean and dig and maintain then this nah woulda happen.

Ali noted that he would not be able to save anything from either of his farms since the water is too much on the land and it continues to raise as the rain falls. The residents are concerned about the situation and are pleading with the relevant authorities to look into their plight.

Tue May 25 , 2021
Support Village Voice News With a Donation of Your Choice. Twenty-nine-year-old, Reshma Brijbhukan is now fearful for her life after the man she once shared a relationship with physically abused her over the weekend at her home in Port Mourant, Corentyne Berbice. Brijbhukan said she and the suspect lived together for more than two years but because of his constant […]