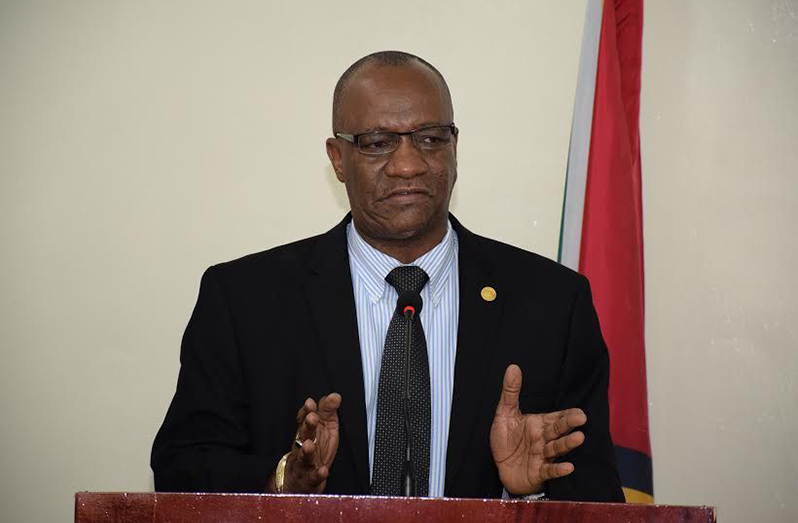 Leader of the Opposition, Joseph Harmon, on Monday, expressed shock and disappointment at the destruction of mangroves along the West Bank of Demerara even as he warned that it has put at risk the lives of thousands of people of Malgre Toute and Versailles and other villages along the West Bank of Demerara including Pouderoyen, Goed Fortuin, Phoenix Park, Plantain Walk and Vreed-en-Hoop.
During a visit to the affected areas on Monday, the Opposition Leader described the destruction of the mangroves as crude and unconscionable.
“The destruction of the mangroves will now make families and their properties and businesses vulnerable to extreme flooding from high tides and spring tides,” Harmon warned  as he pointed to other parts of the country that have been hard hit by floods such as Little Diamond on the eastern side of the Demerara River.

He said the destruction of the mangroves is a tragedy in the making which could lead not to just millions but billions of dollars in losses and damage caused by flooding.
“I said that it was also not surprising. It is not because this PPP regime has a history of destroying our precious mangrove forests. We recall when they were previously in office they allowed the destruction of mangroves along the East Bank of Demerara so that persons crossing on the Demerara Harbour Bridge could see what was then the Buddy’s Hotel. They have also systematically neglected the mangrove forests on the East Coast of Demerara and West Coast of Berbice,” the Opposition Leader said.

Laying the blame at the feet of the Government, Harmon said the Administration continues to demonstrate a clear lack of concern for the environment.
“I want to make it clear that what we witnessed today is not incidental nor was it the rogue action of some random investor. It was facilitated at the highest level. The person had to have the highest access and approval to engage in such wilful destruction,” he said.
He added: “And what did they do? In a poor attempt to shield this tragedy from the eyes of the public they erected a zinc fence along the public road so motorists and passers-by would not be able to see what they are doing. They have also left a thin strip of mangroves along the shoreline so as to shield the destruction from the river goers and persons who use the Demerara Harbour Bridge.”

The Opposition Leader said it is clear that the Environmental Protection Agency (EPA), the Sea Defence Board, the Maritime Administration and other agencies have either had no role or were coerced into either allowing this tragedy to happen to turning a blind eye to it.
“This is not development, this is utter and wanton destruction with possible horrifying consequences.  We support and herald development but development cannot be pursued at the cost of jeopardising the lives and property of our citizens. That is irresponsible, it is reckless and it is scandalous of unimaginable proportions,” he said.

Harmon noted too that the destruction of the mangroves has also depleted Guyana’s standing as a carbon sink. It was explained that the mangroves are voracious in removing harmful carbon from the environment and provides a breeding ground for fish and shelter for birds and other wildlife.
“While we are in the throes of battling the severe effects of climate change, our precious mangroves and sea and river defences are being depleted by erosion. Now, here, this visionless and avaricious PPP regime is not just allowing but facilitating and are complicit in the wilful destruction of our mangroves,” he said while calling on residents to fearlessly object to the destruction of the mangroves bordering their communities.

“The APNU+AFC Coalition demands an immediate stoppage to the project until there has been meaningful and widespread consultations with the people of the communities and also until a credible environmental impact assessment is done and made public. We call on all the thousands of residents whose lives and livelihoods are likely to be jeopardized in the coming weeks and months and all Guyanese to join us in raising their voices against the perpetuation of this environmental atrocity. Today it is Versailles, tomorrow it may be your community. This PPP regime is on a rampage of destruction all across Guyana,” he said.

Edghill defends Mowing down mangroves for US$100M shore base development

Mon May 10 , 2021
Support Village Voice News With a Donation of Your Choice. Hours after the Leader of the Opposition, Joseph Harmon called for the halting of a shore base project at Malgre Toute and Versailles due to the destruction of the mangroves along the West Bank of Demerara, the Minister of Public Works, Juan Edghill and his Junior Deodat Indar came to […]