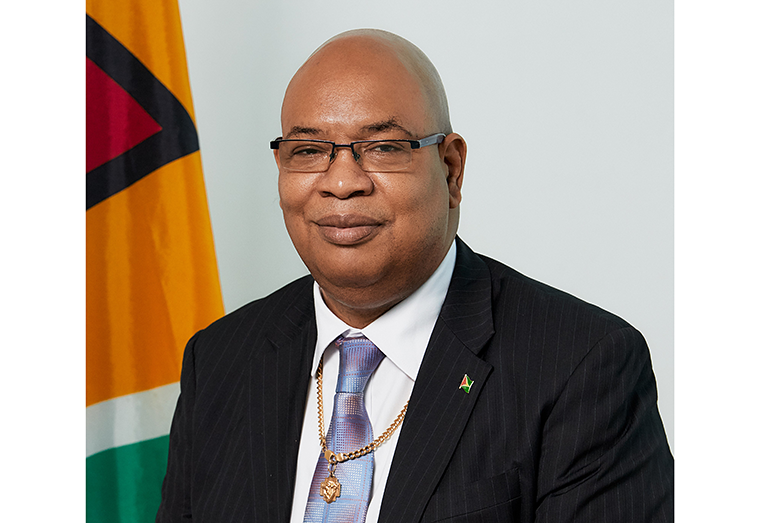 Hours after the Leader of the Opposition, Joseph Harmon called for the halting of a shore base project at Malgre Toute and Versailles due to the destruction of the mangroves along the West Bank of Demerara, the Minister of Public Works, Juan Edghill and his Junior Deodat Indar came to the defence of the multimillion dollar project.

At a press conference on Monday, Minister Edghill said the removal of the mangroves is necessary for the development of a US$100M oil and gas shore base project being executed by TriStar on the West Bank of Demerara.

The Opposition Leader, during a visit to the affected area on Monday, warned that the destruction of the mangroves would put at risk the lives of thousands of people at Malgre Toute and Versailles and other villages along the West Bank of Demerara including Pouderoyen, Goed Fortuin, Phoenix Park, Plantain Walk and Vreed-en-Hoop.

“The destruction of the mangroves will now make families and their properties and businesses vulnerable to extreme flooding from high tides and spring tides,” Harmon warned  as he pointed to other parts of the country that have been hard hit by floods such as Little Diamond on the eastern side of the Demerara River.

But Edghill told reporters that the issue of flooding is a non-issue. He explained that based on the engineer design of project, flood mitigating structures such as sheet piles will be in place.

“So the big issue here is the cutting of the mangroves to facilitate this development, that’s the big issue; the big is not flooding because the adequacy of the measures, the hard structures to prevent flooding are in place, so the big issue is if we should cut mangroves or don’t cut mangroves. Well, let me make it pellucid, development comes with changes. The entire eastern section of the Demerara River comprises of several structures, stellings, wharf, shore base development, [and] the people of West Demerara deserves the same,” the Public Works Minister said.

In the interest of clarity, Minister Edghill said mangroves along with Demerara River will have to be displaced to facilitate the new wave of development coming to Guyana.

Minister Edghill made that statement, however, just minutes after he outlined the importance of mangroves in the prevention of floods.

“It was the PPP Administration, through a European funded project that aggressively pursued mangrove cultivation and the replanting of mangrove as a flood protection mechanism. So the issue of mangrove is one that is embraced by the PPP/C, and it was while we were in government, we ensured the planting, cultivation and ensured that there was no destruction of mangroves. So I want to put that on the table, our tract record is clear,” Minister Edghill boasted.
Harmon, during his outreach, had also warned that the destruction of the mangroves will also deplete Guyana’s standing as a carbon sink. It was explained that the mangroves are voracious in removing harmful carbon from the environment and provides a breeding ground for fish and shelter for birds and other wildlife.

“While we are in the throes of battling the severe effects of climate change, our precious mangroves and sea and river defences are being depleted by erosion. Now, here, this visionless and avaricious PPP regime is not just allowing but facilitating and are complicit in the wilful destruction of our mangroves,” Harmon said while calling on residents to fearlessly object to the destruction of the mangroves bordering their communities.

But Minister Edghill, confident that the necessary flood mitigation measures will be place, said that TriStar – a company owned by resident of West Demerara – had secured a no objection from the Sea and River Defense Board, which includes a representative from Environmental Protection Agency (EPA).  In addition to that permit, TriStar secured a plot of lease land another plot of license land to facilitate its multimillion dollar project.

He said the shore base, which will service the Oil and Gas Sector, will result in the creation of 150 permanent jobs.
“The PPP/C in its approach towards the development of the country has said repeatedly we will not be obstructionists, we will be facilitating; and we have facilitated and will continue to facilitate developmental projects once it comes in a framework where it was properly regulated, sustainable, where there is no danger to lives and livelihood and where we can see the creation of jobs, and this project fits within that framework. And it is within that context that we granted our no objection in the first instance,” Minister Edghill said.

Minister Indar, who echoed similar sentiments and reverted to the closure of a number of sugar estates under the A Partnership for National Unity + Alliance For Change (APNU+AFC) Government, assured that the project will aid in the transformation of Region Three, and is also necessary to support the Oil and Gas Sector.

Tue May 11 , 2021
Support Village Voice News With a Donation of Your Choice. Dear Editor, Commercial banks stand as one of the cornerstones for economic and social progress of societies. The list of services they provide has become something to consider, with the most fundamental of these, serving as financial intermediary between savers and borrowers, probably being the most transformational.  This basic function […]