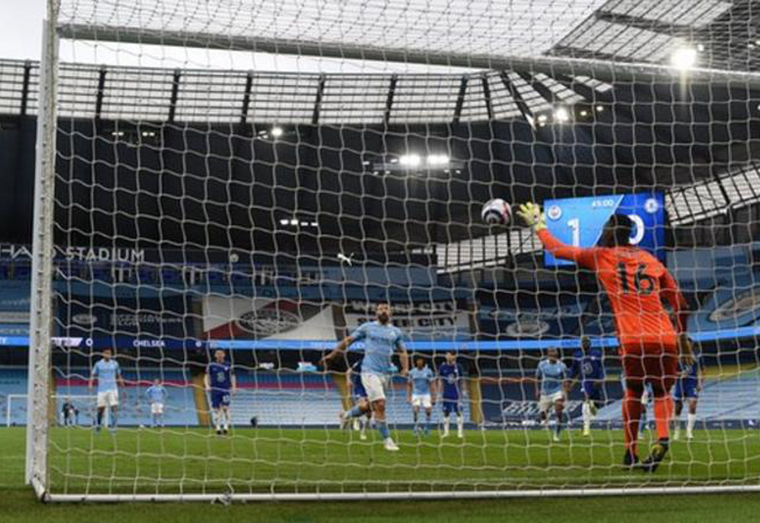 (BBC SPORT) Sergio Aguero made a mess of a Panenka penalty as Chelsea ensured Manchester City must wait a little longer to wrap up the Premier League title by fighting back to earn a dramatic win at Etihad Stadium.

City, needing three points to become champions of England for the seventh time, took the lead just before half-time through Raheem Sterling’s close-range strike. Aguero had a glorious chance to make it 2-0 from the spot moments later when Billy Gilmour fouled Gabriel Jesus, but the Argentina striker opted for a dinked effort that was easily saved by Edouard Mendy.

It proved a costly miss, as Chelsea improved after the break and equalised when Cesar Azpilicueta set up Hakim Ziyech to fire home from the edge of the area. The visitors had two more efforts ruled out for offside before Marcus Alonso won it for them in injury time, meeting Timo Werner’s pull-back and sending the ball looping over Ederson.

This was Chelsea’s second win over City in the space of three weeks, following their victory in the FA Cup semi-final at Wembley in April. The two sides will meet again in the Champions League final in Istanbul at the end of this month. This result can only give Chelsea extra confidence for that game, as well as providing a big boost to their hopes of a top-four finish, but in truth this encounter offered few clues to how their next meeting will be decided.

City boss Pep Guardiola made nine changes to the side that beat Paris St-Germain here on Tuesday, while his Chelsea counterpart Thomas Tuchel made five – and the result was a disjointed performance from both sides.

No celebrations for City this time

Hundreds of City fans had gathered before kick-off to greet their players with fireworks and flares when they arrived at the stadium but their plans to celebrate a third title in four seasons in the same way are on hold after this result.

Although, they will be crowned champions before they play their next game, at Newcastle on Friday, if Manchester United drop three points over their next three matches, which come before City play at St James’ Park.

Guardiola was expected to make changes to his line-up but he also tinkered with his team’s formation and playing style.

Instead of their usual 4-3-3, and trademark patient passing and possession-based game, City lined up in a strange 5-1-3-1 formation and tried to get the ball forward as quickly as possible.

They failed to spark until a breathless spell just before the break, when Sterling put them ahead and Aguero should have doubled their lead from the penalty spot.

Gabriel Jesus was involved in both incidents, first brushing Andreas Christensen off the ball and sending over a low cross that Aguero mis-controlled into the path of Sterling, who passed the ball into the net.

Soon after, with Christensen off the field receiving treatment, Gimour held back the Brazilian forward in the box to concede a penalty, and Aguero – City’s record goalscorer, who is leaving the club at the end of the season after an illustrious decade in Manchester – stepped up, only to fluff his lines horribly.

Guardiola’s frustration at that miss turned to fury in the second half, firstly when Chelsea equalised and then when his side were denied a second penalty with the score at 1-1 late on.

Sterling went down in the box after a clumsy challenge from Chelsea substitute Kurt Zouma, but referee Anthony Taylor waved play on.

While City and their fans were left to wonder what might have been, Chelsea offered more evidence of the improvements they have made since Thomas Tuchel took charge at the start of the year.

The visitors visibly lacked imagination for the first hour or so, and seemed to be badly missing the creative nous of the absent Mason Mount in midfield, but they were well-organised, apart from that madcap spell before the break, and always in the game at 1-0 down.

They came to life in the second half, again demonstrating their threat to City on the break and could easily have had more than just two goals.

Timo Werner and Callum Hudson-Odoi both found the net at 1-1, only to be denied by the linesman’s flag, in decisions that were a good deal tighter than when Werner’s effort was ruled out for a clear offside early on. It was an impressive all-round performance, that bodes well for Chelsea’s attempts to win the FA Cup next weekend and secure a top-four finish before they can turn their focus to the Champions League final.

Sun May 9 , 2021
Support Village Voice News With a Donation of Your Choice. BBC – The eldest son of South Africa’s late Zulu King Goodwill Zwelithini has been chosen as successor to the throne, amid a bitter family feud. Prince Misizulu, 46, was named in the will of Zulu Queen Mantfombi Dlamini-Zulu – his mother -who died unexpectedly last week. There were dramatic […]