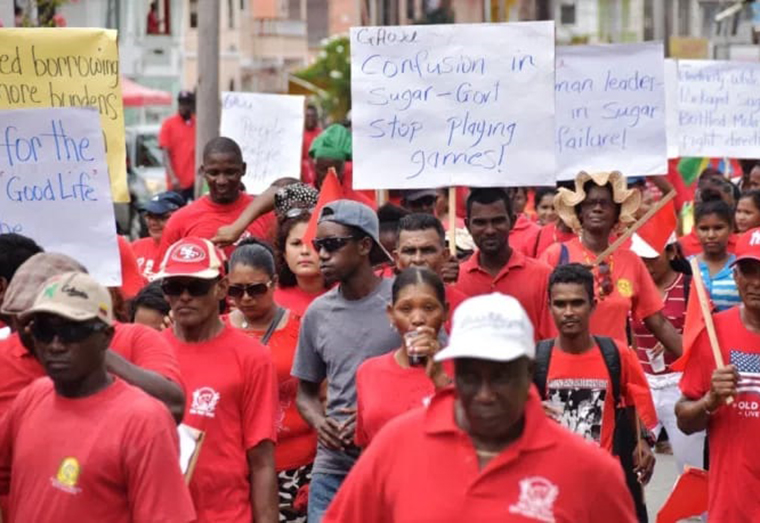 The Federation of Independent Trade Unions of Guyana (FITUG) and its affiliates – the Guyana Agricultural and General Workers Union (GAWU), the Guyana Labour Union (GLU), the National Association of Agricultural, Commercial and Industrial Employees (NAACIE), and the Clerical and Commercial Workers Union (CCWU) – extends greetings and recognizes the contributions and efforts of the Guyanese working-class and all workers of the world on this Labour Day 2021.

This year’s Labour Day finds the world gripped by the novel Coronavirus pandemic. It has disrupted our lives and made the previously mundane seem strange. As in previous times of adversity, mankind has demonstrated its will and intellect to surmount challenges. Concerted worldwide efforts has brought vaccines which can majorly dent the impact of the pandemic. Here in Guyana, we recognize the efforts of the Government to inoculate the adult population. We note when compared to several nations, we have made tremendous progress, and this is reassuring development. Though heartened by such developments, we see too the irresponsibility demonstrated by some of our countrymen and women. Such attitudes are not helpful in our desire to attain herd immunity. And, on this Labour Day we encourage all Guyanese to receive their vaccines as we hold that we all have a responsibility to ensure that we can emerge from the pandemic in the shortest possible time.

As a day set aside to recognize the role of the working-class, the FITUG remains dismayed by the disrespectful attitude of some to our nation’s workers. We have heard too many times of instances of employers who seek to disregard our workers rights and conditions. Such actions are simply abominable and cannot be tolerated. The Federation has recognised the efforts of the Ministry of Labour to bolster to ranks as it seeks to uphold workers rights. This is a positive development and one that we are encouraged by. At the same time, we must express our disappointment that Labour Day 2021 is observed but the national minimum wage remains the same despite an agreement for an improvement. On this Labour Day, we sound our call for the national minimum wage to be increased to $60,000 monthly.

The working-class is guided by the principles of solidarity and fraternity and where workers irrespective of background strive for unity of purpose. Such attitudes we hold should be transcended to national life as well. In as much as we hold hope for such realities, we are disturbed by the divisive sentiments expressed by certain quarters.

This Labour Day also finds the workers breathing somewhat easier as many of the burdens placed on their backs have been lessened. We welcome the reversal of anti-worker policies which heightened the cost-of-living over the last few years. We hail too the reinstitution of the several pro-people policies by the new Administration. Taken together they will go a long way to addressing the plight of our workers. We also recognize statements of His Excellency President Dr Mohamed Irfaan Ali to close the rift between the have and have-nots. Given our anticipated economic expansion such statements are heartening, and we look forward to further expansion of pro-poor policies in the coming years.

Indeed, Labour Day 2021 greets us with a mixture of hope and anxiety. We are certain as in the past we will surmount our obstacles and emerge stronger and more committed. Certainly, there is a lot more to accomplish and more victories are within reach. On this Labour Day, the FITUG reiterates its commitment to enhancing the working-class and deepening the involvement of workers in decision making.

Sun May 2 , 2021
Support Village Voice News With a Donation of Your Choice. (BBC NEWS) India has become the first country to report more than 400,000 new coronavirus cases in a single day, as its nationwide vaccine drive launches amid a supply crisis. Some 3,523 deaths were officially recorded in the past 24 hours – but the real figure is thought to be […]