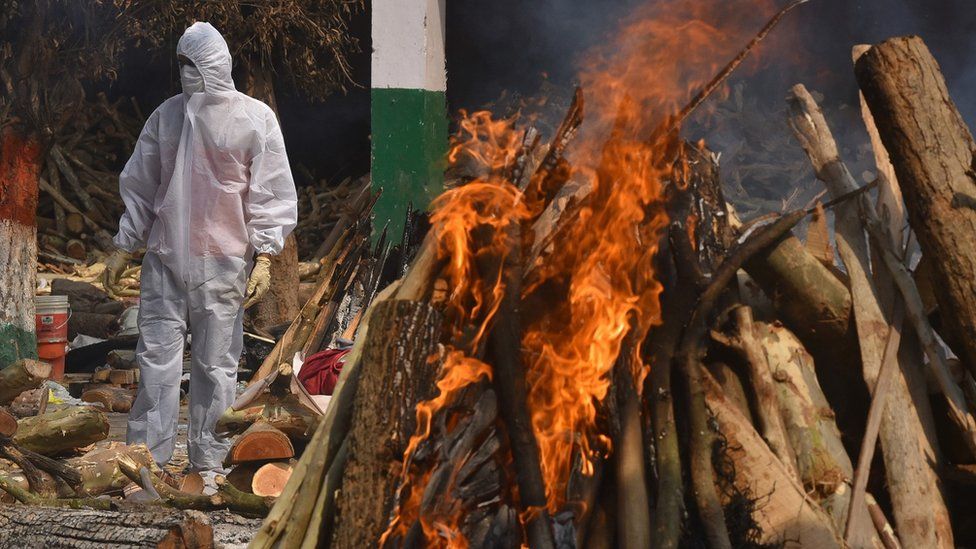 (BBC NEWS) India has become the first country to report more than 400,000 new coronavirus cases in a single day, as its nationwide vaccine drive launches amid a supply crisis.

Some 3,523 deaths were officially recorded in the past 24 hours – but the real figure is thought to be far higher as many fatalities go unreported.

All adults in India are now eligible to be vaccinated.

But several states say they do not have the doses to carry out the exercise.

India had previously focused on vaccinating frontline workers and the over-45s. The country is facing acute shortages of medical oxygen and hospital beds, as a devastating second wave of Covid-19 batters its health system.

How is India’s rollout going?

Despite being the world’s biggest producer of vaccines, the country is suffering an internal shortage and has placed a temporary hold on all exports of AstraZeneca to meet domestic demand. More than 13 million people aged 18-45 have registered for the jab, but states including central Madhya Pradesh and hard-hit Maharashtra have said they will not start vaccinating this age group on 1 May as planned due to supply problems.

Delhi Chief Minister Arvind Kejriwal asked people not to queue up for injections as the Indian capital had not yet received doses. “As soon as vaccines arrive we will let you know, then you can come for shots. We appeal to you not to crowd vaccine centres in the next few days,” Mr Kejriwal said. He later announced that the lockdown in Delhi would be extended by another week.

Experts believe India should ramp up vaccination in areas of high transmission and in five states where elections are being held. Bhramar Mukherjee, a biostatistician at the University of Michigan, told the BBC the country needed to administer 10 million shots daily “instead of being complacent with three million”.

Since the pandemic began, India has confirmed more than 19 million cases – second only to the US. It has also reported more than 200,000 deaths.

The US has said it will restrict travel from India, beginning on Tuesday, to try to stop the spread of Covid-19. Australia has gone a step further, making it temporarily illegal for its citizens to return home from India.

Hospitals in the country have been suffering from shortages of oxygen and beds.

At one hospital in Delhi, several people died on Saturday when critically ill patients were left without oxygen for about 80 minutes before re-supply tankers arrived, according local media reports. Vijay Gupta, 62, was gasping for air outside a hospital in the south-east of India’s capital because all of its beds were full.

“We have been roaming around since 06:00 looking for a bed,” a friend told Reuters news agency. “Where shall we go?”

In Srinagar, the main city of Indian-administered Kashmir, one man said he had been waiting for vaccines to become available at a health centre, only to be told to come back another time.

He said two relatives were with him who had health conditions.

“I’m very worried about them but we’re still waiting,” he told the BBC.

Also on Saturday, a fire in a Covid-19 hospital ward in the western city of Bharuch killed 18 people – the latest in a number of deadly hospital fires across the country this week.

Crematoria have been struggling to cope with the masses of Covid deaths, and some have been forced to build makeshift funeral pyres.

“Come back to us. How will we live without you?” one woman wept on Friday as she waited with the body of her husband at a crematorium in the capital.

Which vaccines is India using?

India has been using two vaccines – the Oxford-AstraZeneca jab (known locally as Covishield) and another made by Indian firm Bharat Biotech (Covaxin).

The Russian-made Sputnik V vaccine has also been approved for use, and the first 150,000 doses arrived on Saturday.

Vaccination is voluntary. State-run clinics and hospitals are offering free jabs, but people can also pay 250 rupees ($3.4; £2.4) a dose at private facilities.

The government is spending around $5bn to provide free doses at state-run clinics, public health centres and hospitals.

Have there been ‘adverse events’ after vaccination?

People can experience side effects from vaccines.

India has a 34-year-old surveillance programme for monitoring “adverse events” following immunisation. Experts say a failure to transparently report such incidents could lead to fear-mongering around vaccines.

India has so far reported 18,904, “adverse events” after vaccination. Most of these events were “minor” – anxiety, vertigo, giddiness, dizziness, fever, and pain – and all patients had recovered, the government said. The surveillance programme has examined 617 cases of “severe adverse events”, including 180 deaths after vaccination until March, according to reports. It found the “deaths happened in cases where the person had underlying conditions, including heart problems, high blood pressure and diabetes”.

Sun May 2 , 2021
Support Village Voice News With a Donation of Your Choice. (BBC NEWS) The bodies of 32 people killed in a stampede at a Jewish pilgrimage site have been identified in Israel. At least 45 people died in the crush at the Lag B’Omer festival, near Mount Meron, when they became trapped in an overcrowded passageway. Some 150 people were injured. […]