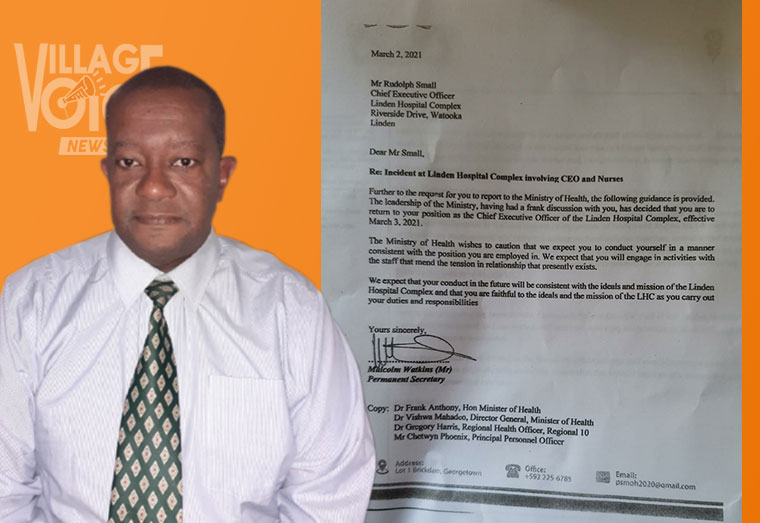 – Linden nurses to up ante in protest against CEO

Nurses attached to the Linden Hospital Complex are threatening to up the ante should the Ministry of Health fail to remove the embattled Chief Executive Officer (CEO) of the Hospital, Rudolph Small.

In an interview with Village Voice Newspaper, the nurses said while the derogatory statement made by Small, in February, to suggest that they often abandon their duties at nights to engage in extra-marital affairs was the ‘straw that broke the camel’s back,’ the CEO, since taking up Office in late 2020, has shown scant regard for the workers of the Linden Hospital Complex, and under no circumstance they are prepared to work with him.

In a recorded conversation with a social media influencer, leaked in late February, Small was heard accusing nurses of leaving their post at nights to “sleep with their sweet man.” The leaked recording had sparked immediate protest actions from the nurses, and in response to a letter dispatched by the Guyana Public Service Union (GPSU), the Permanent Secretary of the Ministry of Health, Malcom Watkins had instructed the removal of Small, however, days later, on March 2, the decision was rescinded, and CEO was ordered to report for duty.

The Health Ministry has since indicated that it will not engage in negotiations for the removal of Small unless the nurses call off the protest.

The nurses told Village Voice Newspaper that though it has been more than 40 days since they initiated protest actions both in Linden and Georgetown, the Health Ministry has not taken the time to understand their concerns surrounding Small and his management of the Linden Hospital Complex.

Speaking under strict anonymity out of fear of further victimization, a Registered Nurse (RN), who has been employed at the Linden Hospital Complex for more than 14 years, told Village Voice Newspaper that during Small’s first week in Office, he accused the staff of having poor customer service skills and opted to facilitate a workshop, though failing to address critical issues such as the shortages of drugs and medical supplies and the poor conditions under which medical personnel are made to work.

“We don’t even have drugs. We are sending patients to buy their drugs to administer to them in the hospital, and these are the things he should have been looking into. In my 14 years working at the hospital, I have never seen it in such a state,” she said.

According to her, Small attacks on the health personnel and auxiliary staff at the Linden Hospital Complex grew, moving from accusations to threats of dismissal and reappointments. “He told us, the hospital is overstaffed with nurses, 236 persons, and he will reassign as he sees fit; and for every nurse that refuses, he will send five,” the nurse explained.

The RN is hopeful that as the more than 100 nurses continue their protest, the Health Ministry will allow for good sense to prevail. “The Health Ministry has never reached out to us, they never really listened to our concerns, and it must have been something bordering us that caused us to protest. Come and listen to our concerns, we want them to come but they said they wouldn’t even listen to us until we go back to work, and Small continues to insult us,” the nurse reasoned.

A Nursing Assistant (NA), who has been serving the Linden Hospital Complex for approximately 14 years, told this newspaper that Small is simply a misfit for the post of CEO.

“Mr Small is very loose, he is very disrespectful,” the Nursing Assistant said while explaining that during the first set of meetings held by Small upon taken Office, he declined to take questions or to hear the concerns of staff.

Like the RN, the Nursing Assistant accused Small of threatening to reassign and or dismiss staff. The Nursing Assistant said in a number of cases, Small has dismissed staff, who have laboured with the hospital for many years. “The center of the hospital was beautified with trees but when he came, he sent home the gardener, now the plants are almost dead,” she pointed out.

The Nursing Assistant said too that it was under Small’s leadership in February, 2021, that the staff of the St. Johns Ambulance Brigade were placed on the breadline after the brigade’s contract with the Linden Hospital Complex was not renewed. She also expressed disappointment over the Health Ministry’s perceived failure to address the concerns of the more than 100 nurses protesting. She said while the Government has referenced to the apology issued by Small that is not enough. “The damage has already done. A lot of females, already in abusive relationships, are being looked at differently by their spouses because of what he said. All we are asking is for him to be removed,” she said.

Representative of the Guyana Public Service Union (GPSU), Maurice Butters, said the leaked statement made by Small is very distasteful. “We believe that was the greatest insult he could have issued to nurses more so the female employees of organisation,” Butters said.

Further, he said in addition to Small’s high handed approach, the CEO, in issuing threats to dismiss staff, has signaled his intention to outsource the services provided by the Auxiliary Staff, the Maintenance Department and the Sanitation Department. He said already Small has gotten rid of the St. Johns Ambulance Brigade.

“People have become very uncomfortable because he is threatening people with their employment, and insulting the nurses,” he posited.

“It is the general consensus that his presence would be a detriment to the provision of the medical service to the community,” Butters said. Calls to Small have proven futile.

Mon Apr 12 , 2021
Support Village Voice News With a Donation of Your Choice. By Naomi Marshall   Coconut water is thought to be a delicious source of hydration, packed with electrolytes such as calcium, magnesium, phosphorous, and sodium. The clear liquid which is taken from immature green coconuts has also been viewed and used as nature’s saline by persons who might be ill […]