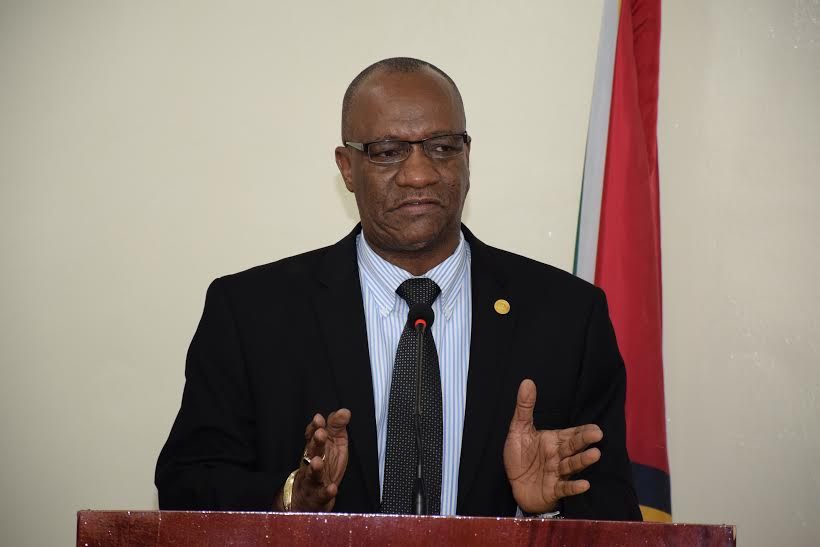 … McCoy says no trace of audited, financial statement of purchase of equipment by LBN

Opposition Leader Joseph Harmon said while the A Partnership for National Unity + Alliance For Change (APNU+AFC) Government had made significant progress in fulfilling the August 2012 Agreement, the transfer of assets from the National Communications Network (NCN) Linden Branch, to the Linden Broadcasting Network (LBN) was not completed because the “paperwork” was still being processed.  Now, he calling on the People’s Progressive Party/Civic (PPP/C) Government to act in good faith and finalise the process.

For the record, Harmon, who, in 2019, was the Director General of the Ministry of the Presidency, told Village Voice News that it was the intention of the APNU+AFC Government to transfer all of the assets belong to NCN Linden Branch, inclusive of the building in which it occupies at Riverside Drive Watooka, to LBN in keeping with the 21st August 2012 Agreement between the PPP/C Government and the Region 10 Regional Democratic Council (RDC).

The August 2012 Agreement , which brought an end to a month-long protest in the mining town, included, among other things, the establishment of a Broadcast Committee responsible for the return of the Linden Television Station, including the dish, the frequency (Channel 13) and other equipment, to the people of the town.

It was under the APNU+AFC Government in March, 2019 that LBN was issued with its broadcast license by the Guyana National Broadcasting Authority (GNBA) to transmit its television signal on Channel 13, which was originally assigned to Green Construction but was donated in the 1980s, as a gift to the residents of Linden. Further, as part of its commitment to honour the 2012 Agreement, the Coalition Government made available a $45M grant to LBN for the acquisition of equipment. The money was also used to renovate the building at Watooka.  “So what we did was to give effect to what the Government had committed in the 2012 Agreement,” Harmon said.

He would later add that “the actual transfer [of the assets] was meant to be the next step in the process.”

That step, he noted, required the intervention of the then Chairman of the Board of NCN, Enrico Woolford and the then Prime Minister Moses Nagamootoo, who was responsible for Information.

With a significant amount of the groundwork already completed, the Opposition Leader said it would be prudent for the PPP/C Administration to make good on the August 2012 Agreement by completing the transfer of the assets, positing that to do otherwise would be to act in bad faith.

The Opposition Leader submitted that though the 2012 Agreement may not have been explicit, it was the intention of the negotiators at the time, that the entire television station would have been handed over to the people of Linden, and not just the frequency and the dish.

He said it is important for the PPP/C Government to act in good faith and swiftly complete the process started by the APNU+AFC Government.

LBN’s Consultant Franklin (Bobby) Vieira, in a recent interview with Village Voice News, contended that a Deed of Gift was drafted in December 2019 to facilitate the transfer of the assets of NCN Linden Branch to LBN but with the understanding that NCN would be given a space within the very building, located at Watooka, to broadcast on Channel 8.

“The Deed of Gift was already prepared; it was prepared between NCN and LBN, all that needed to happen was that the Deed of Gift should have been signed and submitted to the Deeds Registry and all the appropriate and relevant authorities for the handing over, that never happened,” Vieira said.

With the understanding that the assets of NCN would have been handed over, Vieira said LBN rehabilitated, refurbished and equipped the building at Watooka with state-of-the art equipment inclusive of new transmitters, cameras and lighting facilities.

However, during his appearance on the Mark Benschop Show ‘Straight Up” on April 6, Woolford, who was also the Chief Executive Officer of NCN, said the state agency had committed to signing a Memorandum of Understanding (MoU) with LBN and not a Deed of Gift.

“There was no Deed of Gift from NCN’s end,” Woolford said while noting that NCN, under his stewardship, took the necessary steps to ensure that the assets, which belonged to the people of Linden, Region 10, were returned.

“Linden needed to have back its community television station that Greene Construction had gifted to it. NCN did everything within its power, while I was there both as Chairman and as CEO, to ensure that the things that were taken away from Linden were given back to Linden,” Woolford said. Those assets included the frequency (Channel 13), the transmitter and the production equipment.

However, he made it clear that it was not within his remit to hand over the other assets of NCN Linden to LBN.  “I was CEO and I was Chairman, [and] it is not within my power, it is above my pay grade to vest, unless I am directed by the Executive to so do, to vest away the State Assets, anyone, anything, at any time. My job was to protect the assets of NCN, and to ensure that NCN grows and develops,” he said.

Woolford said he had advised the representatives of LBN to set up a television station independent of NCN, in an effort to safe guard its assets, but it nonetheless proceeded with the renovation of the building and installation of equipment. “I cautioned Bobby about setting up a community broadcasting system within a public broadcasting system,” Woolford said.

He believes that if the equipment purchased by LBN is extracted from NCN Linden Branch, the television station could be easily put into operation. “I would challenge anyone right now that if I were to get all of the equipment, the $45M worth in equipment that the Guyana Government gifted to the Linden community, within one month, one month from today, if I were to get it today, a transmitter would be on the air, television station would be on the air, and Linden would be able to broadcast to its community without NCN,” he said.

LINDEN TV REMAINS UNDER THE CONTROL OF NCN

However, with no clear arrangement in place between NCN and LBN, all of the revenues garnered from ads and programmes broadcast on Channel 13 are received by NCN, leaving LNB financially challenged. Further, the local leaders have found themselves in a peculiar situation, where, despite being the Trustees of LBN and Channel 13, they now have to seek approval from the Management of NCN to broadcast programmes on Channel 13.

Following the change in Administration in August 2020, LBN’s Board of Trustees, which comprises the Regional Chairman, Deron Adams (Chairman); Member of Parliament, Jermaine Figueira (Secretary) and Mayor of Linden, Waneka Arrindell (Board Director) met with the Minister within the Office of the Prime Minister with responsibility for Public Affairs, Kwame McCoy and the Management of NCN, with the view of having the transition completed.

Minister McCoy made it clear that the building at Watooka remains that of NCN.

“As far as I know, the building belongs to NCN,” he said while adding that NCN remains the “holder of broadcasting equipment in Linden as well.” According to him, while LBN’s Board and Consultant have indicated that the equipment currently being utilised by NCN was procured by LBN, there is not enough evidence to prove that is the case, though receipts may have been provided.

“But even if, as well, there is no audited statement, financial statement to the effect; and as far as I know, they have a claim, there is nothing at the moment that I can honestly say that gives ownership to anyone other than NCN, the building and the assets that are in the possession of NCN,” he said. Minister McCoy said he cannot answer for equipment purchased outside of NCN.

When asked if Government is prepared to hand over the building to LBN as part of the 2012 Agreement, this is what he had to say: “I am still looking for the 2012 Agreement, which could be helpful to this situation, and until such time when I myself could have clarity, then I will be able to move further than I can at this time.” He, however, maintained that the television station remains that of NCN.

“The Linden Station is still in the ownership of NCN; it belongs, as far as I know, to NCN…the people of Linden have had and continue to have access to the station; it is a station…utilised by people who are willing to utilise it for the right purpose in keeping with the broadcasting regulations and protocols and policies of NCN,” he said.

In response to contention that the local leaders now have to seek permission from NCN’s Management to air content on Channel 13, Minister McCoy said the approval system is in keeping with established protocols governing the operations of NCN. The situation, he said, is the same for government ministries and agencies seeking to broadcast content on the state television and radio stations.

Mon Apr 12 , 2021
Support Village Voice News With a Donation of Your Choice. – ChildLink urges parents to be more vigilant during pandemic  By Lisa Hamilton   As a result of COVID-19, more children are using the internet and may be exposed to bullying or child predators. More children are also at home or in the company of persons designated to look after […]