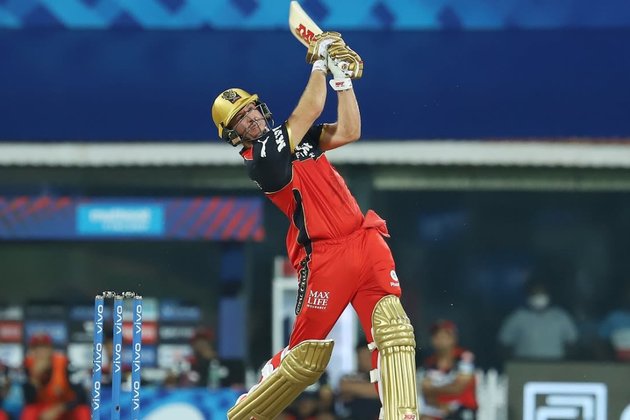 (CRICINFO) Two men who had played no senior competitive cricket since IPL 2020 turned up with ball and then bat, as the Royal Challengers Bangalore began IPL 2021 with a last-ball win against defending champions Mumbai Indians. Harshal Patel took the IPL’s first five-wicket haul against Mumbai, returning 5 for 27 in four overs, ripping the heart out of Mumbai’s monster hitters with a variety of slower balls and inch-perfect yorkers to keep the IPL’s winning-est side to just 159 for 9.

The Royal Challengers then had the game well in hand with 62 needed off 46 and eight wickets in hand, but a collapse ensued with Mumbai clawing back every inch of the way into the contest. However, they couldn’t get past AB de Villiers – not until the final over when he was run out – who had done enough to put his team in a position where they could get over the line. Just about.

Patel bowled overs 16, 18 and 20, and was single-handedly responsible for Mumbai ending up below 160 when they looked set for more than 180. His wickets were Ishan Kishan, the Pandya brothers, Kieron Pollard and debutant Marco Jansen, and each wicket was a result of the bowler outfoxing the batsman. His bowling meant the Royal Challengers could weather a collapse and still win, although they needed de Villiers to smash 48 off 27 in a death-overs masterclass of his own, taking on Trent Boult and Jasprit Bumrah. Patel still needed to come out and hit the winning run with one needed off the final ball, digging out a Jansen yorker to short fine leg to scamper the single that sealed the match.

Early indications of how the pitch would play arrived in the opening overs, with Rohit Sharma and Chris Lynn often early into their shots, and the ball not only sticking in the pitch but also keeping low. Lynn was given a chance thanks to Quinton de Kock still being in quarantine, and looked rusty. A mix-up that resulted in Sharma – who had just begun to find his flow – being run out didn’t help Mumbai.

However, Lynn rode his luck to stick around. He had no fewer than five edges and mis-hits during his stay, until the sixth one consumed him. But before being dismissed, he had converted an iffy start, where he was 6 off 11, into an innings of 49 off 35. He stuck to his strengths, muscling the ball once he had sussed the pace of the pitch better, taking boundaries off Yuzvendra Chahal and Shahbaz Ahmed.

Suryakumar Yadav was fluent right from the time he came in, and with Lynn beginning to hit with more authority, Mumbai looked on track to get a score in the region of 180. Yadav’s dismissal, edging behind a Kyle Jamieson slower bouncer, made Mumbai stutter somewhat. Kishan still kept them going, and with a middle order packed with big hitters, Mumbai still seemed well on top.

Harshal Patel strikes
Patel began by conceding seven runs off his first legal ball via a no-ball and a free-hit six, amounting to 15 runs in his first over. After that, he was thrown the ball only at the death, given the responsibility of bowling to Mumbai’s array of fearsome hitters. He responded with three overs that made everyone forget – at least for this game – that the Royal Challengers had entered this tournament with a big death bowling hole to fill. In the 16th over, he bowled a dipping full toss to Hardik who completely missed his whip to be struck in front. In the next, he landed a perfect yorker to Kishan that was so well bowled it outdid even umpire Nitin Menon, whose on-field ‘not out’ was overturned on review after what felt like ages.

His last over topped it all, with Krunal and Pollard falling off the first two balls, undone by changes of pace to hole out. A yorker reminiscent of Lasith Malinga almost gave him a hat-trick against Jansen, but it just about missed the stumps. He wasn’t to be denied next ball, completing a five-wicket haul for the first time in T20 cricket with an inswinging yorker that shattered the stumps. Patel had bowled three of the last five overs, which saw only 31 runs, and the last over yielded a single run, in Patel’s grandstand finish.

Maxwell tees off, de Villiers finishes
With Devdutt Padikkal still not fully fit after a bout of Covid-19, the Royal Challengers sprung a surprise by sending in Washington Sundar to partners Virat Kohli at the top. The move didn’t quite pay off, with Sundar not finding the gaps, or his timing, but Kohli started smoothly in the powerplay, which put his team on a steady course in the chase. Sundar and Rajat Patidar – another IPL debutant – fell cheaply, but that allowed Glenn Maxwell to have a crack at No.4 for his latest IPL franchise. Three balls in, Maxwell reverse swept Rahul Chahar over point for a boundary. Shortly after, he stepped out and sent Krunal out of the stadium with a monstrous six over long-on. No sixes at all in IPL 2020, and his first hit over the fence was as if making up for that drought.

Bumrah started the slide, as he often does, trapping Kohli lbw in the 13th over, and suddenly, from 98 for 2, they slid to 122 for 6 in four overs. But de Villiers was still there, and with 34 needed off 18, he took Boult for 15 runs, and then with the game in the balance, he hit two stunning fours in Bumrah’s over – the 19th of the innings – to bring his side to the doorstep of victory. In a final twist, he was run out on the fourth ball of the last over, with Jansen showing great promise on debut to nail his yorkers. But while the de Villiers run-out meant one last heart-stopping moment, Patel wasn’t to be denied on this night.

Chelsea beat Palace to move back into top four

Sun Apr 11 , 2021
Support Village Voice News With a Donation of Your Choice. (BBC SPORT) An impressive Chelsea moved back into the top four of the Premier League with a dominant victory at Crystal Palace.  Beaten 5-2 at home last weekend by struggling West Brom, the Blues quickly set about making amends, scoring twice in the opening 10 minutes, during which the overwhelmed […]