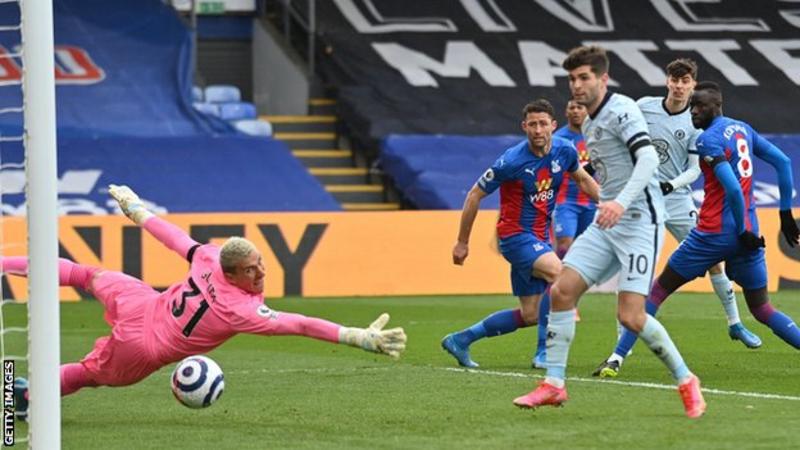 (BBC SPORT) An impressive Chelsea moved back into the top four of the Premier League with a dominant victory at Crystal Palace.

Beaten 5-2 at home last weekend by struggling West Brom, the Blues quickly set about making amends, scoring twice in the opening 10 minutes, during which the overwhelmed home side barely got a kick of the ball.

Kai Havertz curled in the first before turning provider to set up Christian Pulisic to fire the second into the roof of the net from close range.

Kurt Zouma all-but ended the game as a contest on the half-hour mark, rising highest to head in a Mason Mount free-kick.

And the visitors could easily have had more before the break but for some good goalkeeping from Vicente Guaita and a goalline clearance from Patrick van Aanholt to clear another Zouma effort.

Christian Benteke headed in Jeffrey Schlupp’s cross to reduce the deficit to reward an improved second-half showing from Palace with 25 minutes to go, but Pulisic’s far-post finish from Reece James’ cross ended any hope of an unlikely comeback.

A redemptive week for Chelsea

Wednesday’s 2-0 victory over Porto in the first leg of their Champions League quarter-final washed away some of the negativity from that result, putting them in a great position to reach the last four.

And they completed the job with this one-sided display that puts them back in the English top-flight top four, ahead of the likes of Liverpool and West Ham, who will replace them if they win their game in hand at home to Leicester on Sunday.

They had full control of the game before the 11th minute and sealed the win ahead of the 31st through a display packed with neat, precision passing, effective high pressing and clinical finishing.

Keeping up such a relentless display throughout the game was always unlikely, but even when Palace were able to muster something to hurt them, the Blues always had a higher gear to click into.

Palace started the game aiming for a fourth successive top-flight clean sheet at home for the first time since 1992. They spent the majority of the game simply trying to keep the scoreline respectable.

With 38 points, 12 more than 18th-placed Fulham, Roy Hodgson’s side will not be going down this season but the ex-England boss will want to see his side compete better over their remaining fixtures.

Tuchel and his side still have plenty to do if they are to end the season with a place in the 2021-22 Champions League, but the last four days have set them up for a big last push.

Sun Apr 11 , 2021
Support Village Voice News With a Donation of Your Choice. The Pan American Health Organization/ World Health Organization (PAHO/WHO) has mobilized to help the government of Saint Vincent and Grenadines respond to eruption activity of Volcano La Soufriere and to a possible explosive eruption. After several days of increased seismic activity, Saint Vincent and Grenadines has issued a red alert […]