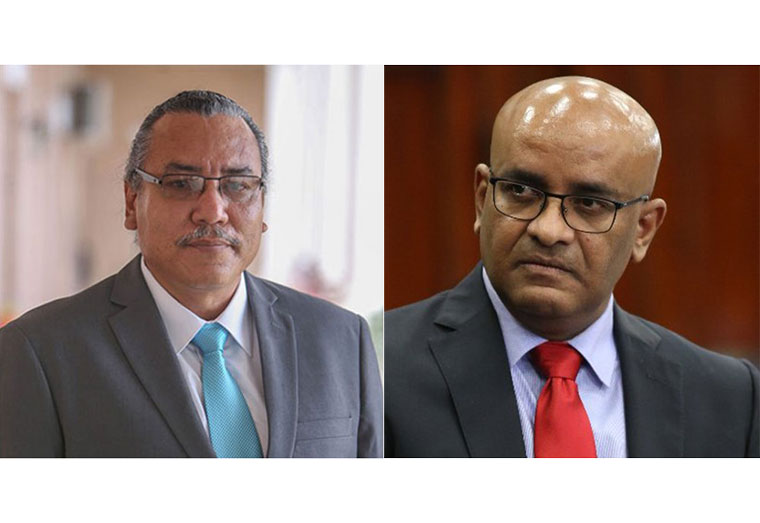 Former Director of the National Insurance Scheme, Mervyn Williams said that the NIS is obliged to increase the rate of payment to pensioners whose rate of pay are overtaken by the new statutory minimum wage.

He said refusal to effect payment of increase to such pensioners violates the law. Williams, one of the immediate past directors and also a former Member of Parliament made the comment when contacted by the Village Voice News to share his perspective on the ongoing quarrel over the state of the scheme. It was Vice President Bharrat Jagdeo who last week told a community meeting at Bath Settlement, West Coast Berbice that the scheme was bankrupt and cannot pay an increase in pensions. He also blamed the former APNU+AFC administration for the state of affairs, saying that the firing of some 7000 sugar workers significantly dented the scheme’s revenues.

However, Williams reasoned that the National Insurance and Social Security Act, Chapter 36:01 of the Laws of Guyana governs the NIS. He said no individual has any lawful control over increases to pensioners. “Regulation 4 (b) and (c) of the National Insurance and Social Security (Benefit) Regulations addresses this question.  “…in no case shall the weekly rate of old age pension exceed sixty percent of relevant wage or be less than forty percent of the existing statutory minimum wage.” “It follows that, whenever the statutory minimum wage moves up, the NIS is obliged to increase the rate of payment to (some) pensioners.  That is, those pensioners whose rate of pay are overtaken by the new statutory minimum wage. Refusal to effect payment of increase to such pensioners violates the law,” Williams noted.

On the claim that NIS is bankrupt and the casting of blame on the APNU+AFC Administration, Williams said Jagdeo’s claims that the reduction of GuySuCo’s workforce by 7,000 is the reason for the NIS becoming “bankrupt” is flawed. “I disagree with the choice of the word “bankrupt” premised on definition. I also disagree with the assumption that the reduction of the GuySuCo workforce is responsible for the decline in the National Insurance Fund. NIS has been operating at a deficit for some years now.  In fact the decline started in 2009 and the deficit started in 2011.

Regarding the Clico investment, Williams said the forensic audit report (by R. Seebaran) into the operations of the NIS said “The Scheme has not received any return on the investment since 2009”.   The Berbice River Bridge was constructed in 2008.  The investment by the NIS is believed to have been based upon government’s directive. The Chairman of the Board of Directors of the NIS was Dr. Roger Luncheon who was also Head of the Presidential Secretariat and Secretary to Cabinet. “The numbers above tell the story of a once prosperous National Insurance Fund until it was raided in the name of investment opportunities.  The massive decline in and the systematic eating away of the National Insurance Fund’s surplus is coincidental to the unwise imprudent investments in Clico and the Berbice River Bridge,” Williams pointed out. He said it is true to say that, a reduced population of contributors will mean a reduced income base for the Scheme. “It is also true to say that there will also be a reduced exposure to short term benefit expense. That said, there is evidence of former sugar workers becoming and registering as self-employed contributors. There is also evidence that the organisation which benefited from the largest benefit pay-outs is the GuySuCo. One will recall that it was the People’s Progressive Party (PPP) which led the way in condemning the establishment of the NIS.  Many will be aware too that, it was the GAWU which together with the PPP ensured that the GAWU membership fully exploited the NIS benefits.  It is a fact that, GuySuCO has not always been as upright a corporate establishment with regard to payment of contributions to the NIS on behalf of its employees as it should,” Williams charged.

He said GuySuCo employees, past and present are aware that when the investments in Clico and the Berbice Bridge were made by the NIS, their union boss Mr. Komal Chand (deceased) was at all times a member of the NIS Board and a Member of Parliament.

Suggesting measures to improve the scheme, Williams said for too long enough attention has not been paid to the actuarial reports and recommendations. He said political decisions have taken precedence over sound economic recommendations, noting that prior 2015 increase in wages and salaries were minimal. “Consequently, the political bosses could not increase the rate of contributions as recommended by the actuary.  Mr. Jagdeo could not risk his popularity by increasing NIS contributions when he lacked the will to increase wages and salaries. The result is an imbalance with respect to contribution income and benefit payments.”

According to Williams a former Member of Parliament, investments in the Oil and Gas sector presents an opportunity to increase both the contribution base and the rate of contributions receivable given the direct and indirect jobs which should be created. “Investment in facilities which provide chemotherapy and dialysis treatment to patients will reduce the benefit exposure of the NIS while contributing to a healthier workforce and population as a whole while increasing revenues.” He said realising the proposal for the establishment of a Credit Union of the NIS and its investment in the housing sector starting with employees of the NIS will increase revenue inflow.

Additionally, he said an effectively functioning compliance operation complete with highly trained technical support staff and cooperation agreements with the GRA and workers’ unions will contribute to sustained and timely revenue inflow and debt recovery. “Critical review of the current legislation effecting necessary amendments to further safeguard the Fund and equip the NIS with the appropriate tools and management required for the success of the organisation is necessary.”

Williams insisted too that a political-hands-off approach which allows the Board the scope to do its work, particularly in the investment area would be a good thing. “There needs to be a critical assessment of all investments of the NIS with a view to establishing an investments portfolio which is professionally managed. I would go as far as recommending that the NIS seeks to acquire all shares in the Berbice Bridge in order to properly secure its investment, realising (finally) a return thereon.”

Williams argues that the NIS should also make use of Section 34 (2) to jump-start investment by the NIS to re-establish itself as a viable Fund with a healthy reserve recognising that bad investment decisions by Mr. Jagdeo’s government are responsible for wrecking a viable social security scheme. Section 34 (2) provides as follows: “Any temporary insufficiency in the assets of the Fund to meet the liabilities of the Fund under this Act shall be met from such moneys as Parliament may advance for this purpose.”

Jagdeo doubles down
Meanwhile, continuing to trade blame as to who is responsible for the “bankrupt” state of the NIS Vice President Bharrat Jagdeo, on Friday, said that the scheme went from having an operating surplus in 2015 to having a deficit in 2020 under the A Partnership for National Unity + Alliance For Change (APNU+AFC) Administration. In responding to the concerns of residents at Bath Settlement last Wednesday had Jagdeo indicated that NIS is in no position to increase the benefits of retired workers because the scheme is simply bankrupt, laying the blame at the feet of the David Granger Administration.  But on Thursday, APNU+AFC Member of Parliament, Volda Lawrence fired back, stating that it was the Jagdeo Administration which had abused the resources of NIS.

He added: “It has moved from an operating surplus to a huge operating deficit.”

But Lawrence said it was the Jagdeo Administration that landed NIS into a state of financial ruin, having plundered the schemes resources.  “May I remind Mr. Jagdeo and NIS pensioners, also current contributors to NIS and the world at large, that it was this very Vice President, who despite the advice from the Board of Directors of the NIS, including Guyanese with experience in financing and investment, proceeded to invest the members monies in the Berbice River Bridge, the CLICO Insurance Scheme and Laparkan, among others,” Lawrence said in her statement.

She pointed out the Jagdeo Administration invested $2.5B of NIS monies in Ordinary Shares in the Berbice River Bridge, and another $810M in NIS resources into this bridge in order to cover the non-performing assets in the entity.

According to him, NIS has thus far received $2B in interest and payments for their preference shares, and approximately $1.3B in principal repayment.

According to Jagdeo, investing in the Berbice River Bridge, was one of NIS best investments. Notably, the Vice President did not address the investments in CLICO and other entities.

The Opposition, however, is adamant that it was the actions of the PPP/C Administration, which led to NIS resources being depleted.  “One must also not forget the CLICO fiasco again involving Mr. Jagdeo and the NIS funds whereby some 5 plus billion dollars was invested. And we all know the fiasco of CLICO which was placed under judicial management in 2009 and subsequently was liquidated in September 2010,” the APNU+AFC MP said.

She said it was the combined opposition in the National Assembly that by its very majority voted and passed a resolution for the Liabilities of NIS to CLICO to be paid off.

“There was a commitment by his administration to do so but it was never done. Rather, it was that same combined opposition, which formed the coalition government in 2015 and granted payments to CLICO for NIS through the issuance of 20 non-negotiable Debentures, to be redeemed annually over 20 years at a fixed interest rate of 1.5 percent,” Lawrence explained.

According to her, Jagdeo should be advising the President and Cabinet on the provision in the Financial Institution Act of 1995 on how to treat with NIS under section 3 of the Co-operative Financial Institutions Act.  She said a coalition government would seek to utilize monies from the Natural Resources Fund by providing an annual subvention to NIS of approximately US$15M, just 1% of the present amount in the fund, in order to wipe out the deficit caused by the Jagdeo Administration. Lawrence said the Opposition stands ready to approve such an approach should it be brought to the National Assembly.

Unions roast Gov’t over the discriminatory firing of workers, violation of laws

Sun May 1 , 2022
Support Village Voice News With a Donation of Your Choice. … as Guyana observes Labour Day President of the Guyana Public Service Union (GPSU), Patrick Yarde did not mince words when he addressed head-on the discriminatory firing of workers and the continuous violation of the country’s Labour Laws, not just by the Irfaan Ali Administration but successive Governments. In his […] 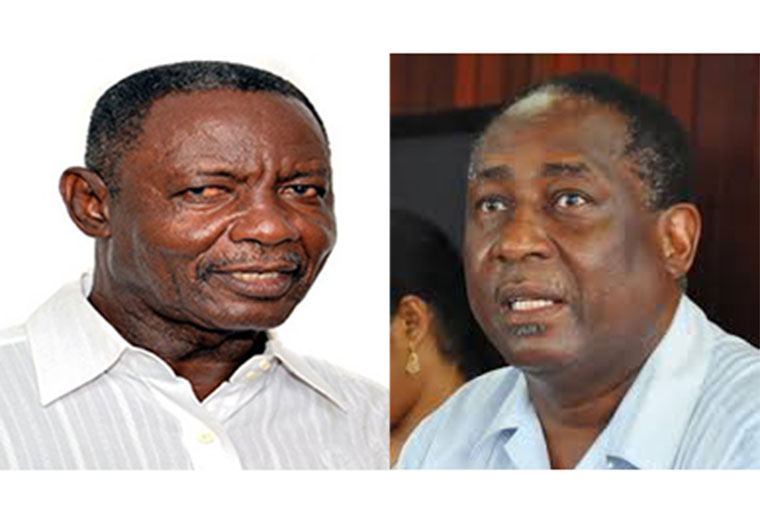