Ousted Chairman of the Linden Utility Services Co-op Society Limited (LUSCSL) Board of Directors, Charles Sampson said the decision to dissolve the Board and install an Interim Management Committee (IMC) will not go unchallenged, but Minister of Labour, Joseph Hamilton, in defending the decision of the Chief Co-operative Development Officer (ag), said the co-op society has been poorly managed, and if not fixed could result in its collapse.

In a letter to Sampson in early March, the Chief Co-operative Development Officer (ag), Debbie Persaud, indicated that an IMC was appointed to manage LUSCSL based on complaints that the co-op society was being poorly managed. Sampson and the Committee of Management were ordered to hand over all documents to the IMC.

But the decision was met with resistance, with staff and directors, alike, staging sit-outs in recent days.

In an interview with the Village Voice Newspaper on Friday, the Labour Minister said LUSCSL was not being managed in a transparent and accountable manner.

He said the LUSCSL’s Board, recognizing that it was “flouting the law,” hired a consultant in the past to advise them on critical issues. According to the Labour Minister, the consultant, in her report, highlighted a number of breaches. Those breaches, he contended, have not been remedied to date.

Minister Hamilton said upon taking Office in 2020, his Ministry was flooded with complaints about the co-op society, which distributes electricity to Wismar, Linden, being mismanaged. He said recently those complaints have been followed by a petition, which was submitted to the CCDO (ag).

Maintaining that due process was followed, the Labour Minister said the CCDO (ag) engaged ‘all’ members of the Committee of Management before its dissolution, and the installation of the IMC. “An Interim Management Committee is what it is. They have specific mandates they have to do in a time period,” he said while adding that outstanding audits would be addressed as well as the register, and all other issues. He assured that upon the completion of its mandate, the IMC will facilitate an AGM under the supervision of the Chief Co-operative Development Officer (ag) for the election of office bearers.

The ousted Board, however, has argued that due process was not followed, but the Labour Minister disagrees. “If anyone believes due process wasn’t follow, they have an option individually or collectively to approach the court,” Minister Hamilton said.

He said that continued mismanagement would have resulted in Wismar being plunged into darkness.

“The mismanagement can plunge this co-op society into bankruptcy, and if that is done, if that happens, the Wismar shore would be plunged into darkness, and people will suffer, thousands of persons. And you know what? If that were to happen, everybody would blame the Government,” Minister Hamilton reasoned. According to him, the utility services co-op society has outstanding money for the Guyana Revenue Authority (GRA), the National Insurance Scheme (NIS), and even the power company – Linden Electricity Company Inc. (LECI) – from which it purchases power. He said too that dividends have not been paid in years.

But Sampson told the Village Voice Newspaper that the Labour Minister is ill informed, and like the Chief Co-operative Development Officer (ag), would have failed to conduct a thorough investigation into the ‘claims’ of mismanagement leveled by a few “corrupted members.” He said in the absence of due process, the Board will challenge the decision of the CCDO (ag) to install an IMC. “We will challenge them, legally we will challenge them because we are certain that they didn’t follow all the procedures that needed to be followed. We don’t accept the dissolution of the Committee because they have ulterior motive,” Sampson said.

While admitting that the last AGM was held in 2014, Sampson said there was a reason for that. According to him, AGMs were not held due to there being a number of audits outstanding because the accounts were not in order. He said as LUSCSL inched closer to resolving those issues, the country was hit by the COVID-19 pandemic in 2020, which spanned for two years.

However, he said as of now, LUSCSL has completed all internal audits up to 2021. According to him, the Board was planning to hold an AGM this year upon the completion of the external audit for 2021.

“We were on the verge of holding AGM but these people have other motives… its all politics,” he contended. Sampson said, however, that the People’s Progressive Party/Civic (PPP/C) Government has no moral authority to lecture the co-op society on the importance of elections.

“But imagine the Minister of Labour talking about not holding AGM, how long it took them to hold Local Government Elections, this Government, twenty-something years. So they don’t have the moral authority to accuse members of this society of not holding an AGM,” Sampson posited.

The ousted LUSCSL Board Chairman said the allegation that the co-op society had defaulted on its payments to GRA and NIS is completely false. “When we deduct NIS, we pay those things, and we pay them in a timely manner. So they are just spreading lies,” Sampson told this publication, while maintaining that the CCDO (ag) failed to carry out a proper investigation before taking action.

He said contrary to the reports of Minister Hamilton and Persaud, LUSCSL is one of the best managed co-op societies in Guyana.

“The society is performing reasonably well financially. [However] the society has issues because the society is owed a lot of money. I’ll give you a classic example, the Town Council owes the co-op society over $70M, and that was for the provision of street lights, and years now, we have been trying to have that issue corrected,” he said.

On Friday, Leader of the PNCR, Aubrey Norton, met with the members and workers of LUSCSL, and urged them to resist the imposition of the IMC.

Norton warned that the Government is attempting to install a Management Committee that it can control and manipulate.

“…they will orchestrate it in such a way that they will remove the subsidies which will cause the electricity in Region 10 to go up,” Norton contended, noting that in the end Linden will suffer.

The PNCR Leader urged all of Linden to defend the co-op society. “We must ensure that this Co-op Society not only survives but stays in the hands and control of the people of Linden. We owe it to the three unarmed people they killed and murdered to stand up and ensure that this society continues to be the property of the people of Christiansburg and Wismar in particular and Linden in general,” he said.

Region 10 Member of Parliament, Jermaine Figueira; and Region 10 Regional Chairman Deron Adams were among the officials present during the meeting with the workers and members of the co-op society.

Sun Apr 10 , 2022
Support Village Voice News With a Donation of Your Choice. …after move to alter Standing Orders on quorum The A Partnership for National Unity + Alliance For Change (APNU+AFC) is accusing the Irfaan Ali Government of attempting to stymie the work of the Public Accounts Committee (PAC) by proposing that Standing Orders be amended. Minister of Parliamentary Affairs and Governance, […] 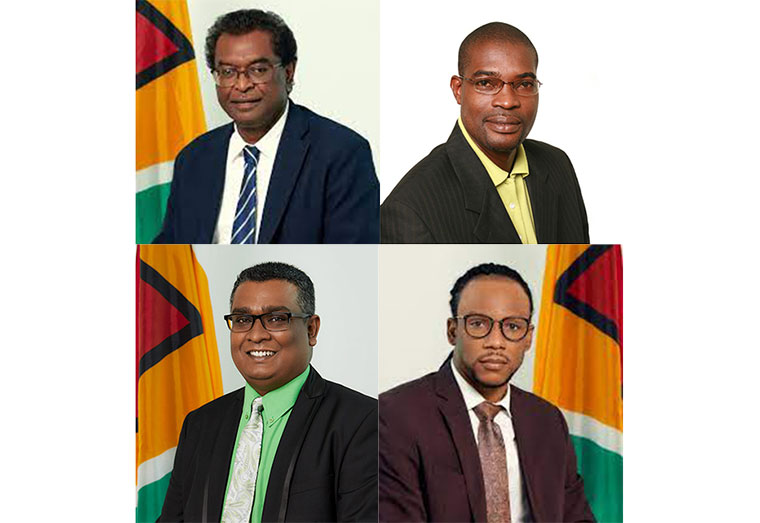