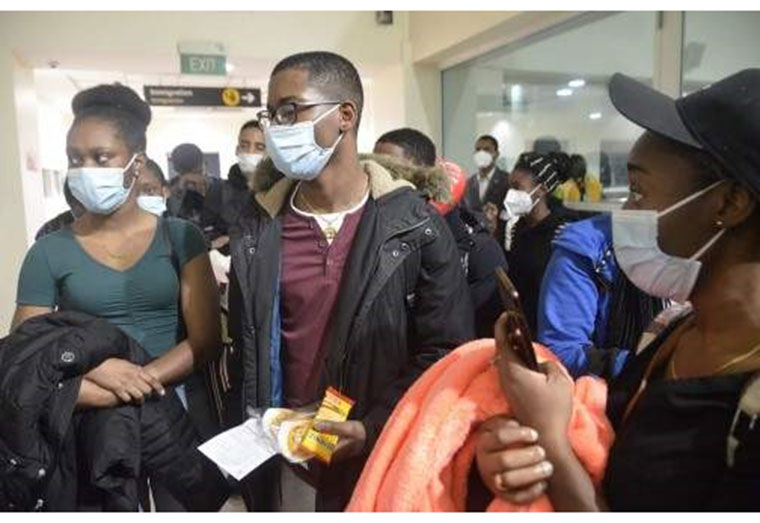 MONTEGO BAY, St James — One of the 20 local tertiary students who on Wednesday arrived at Sangster International Airport in Montego Bay on a Eurowings flight from Frankfurt, Germany, after fleeing war-torn Ukraine has said that they would not have been able to safely leave the country without the help of Ukrainians.

The Jamaican students had gone to Ukraine to study but found themselves in the middle of a war after Russia invaded that European country on February 24. During an interview with the Jamaica Observer shortly after arriving at the airport, Matthew DeSilva, an engineering student, expressed gratitude to the Ukranians and solidarity with the Eastern European country.

“I can only speak for myself right now. We entered Ukraine to study. We were welcomed by the Ukrainians. I also want to make this point clear to everybody, we wouldn’t have left the country without the Ukrainians. I mean, people whose sons are dying, whose fathers are dying, whose brothers are dying had no right to aid us, yet they did. We got so many lifts, there was food provided for us, and they didn’t have to do it, especially when their country is being destroyed right now,” DeSilva said.

“So a lot has happened. We are all grateful to be here and I can only show my appreciation to the country that I have left and wish them the best. I may be Jamaican, but my heart is Ukrainian,” he said.

Ironically, Chelsea Williams, a fourth-year medical student, recounted that, prior to the war, she found Ukraine safer to live than Jamaica. However, she admitted that when the shellings started it was the first time in her life she had heard explosions. “Getting out, we were scared because you know this is the first time I have been hearing explosions. Not even in Jamaica I have heard explosions,” Williams said.

She said that prior to the war in Ukraine “it was normal, life was nice… I mean, in comparison like here in Jamaica. To be honest, we felt safer there. Crime was really, really low there. The quality of living was high. The cost of living was low. So you could have a decent life with a little bit of money. So it was a very nice place, that is why we are so adamant in going back to Europe because it was better than being here. The only thing that we didn’t like was the unsurety of when war is going to happen.”

Indelibly etched in her memory is one occasion when a bomb dropped near to where she was standing. “There was a particular time when we were in front of the train, just waiting to get on the train, just waiting for the door to be opened and the bomb dropped near us. The entire place was foggy, we just had to run, we had to leave the train. Some students stayed back — not Jamaicans — and they got to board the train. We just had to run for shelter. So you know that was very traumatic because it was either we were going to stay and risk our lives and go on the train or run for shelter. We chose the shelter in that case. It was a lot of life and death situations for us. We had to weigh our options. I am grateful that we got here,” she said.

Rhonda-Kaye Trought, a medical student, who had been in Ukraine since October last year, recounted that during the treacherous journey from Ukraine to Poland, they survived, among other things, frosting weather. She expressed gratitude to friends who assisted her on the roughly 10-hour trip to Poland.

“It was snowing and at one point it was really cold. We had to help each other with bags and stuff. When we got to the border it was a very long line. We were just standing out there. I was the one who fell ill. I don’t know what happened after that. I just thank God for my friends and Jamaicans that were there trying to help me through all the way. We are just happy that we are home,” Trought said.

“Going to Ukraine was a nice experience until this happened — a tragic experience. We are just glad that all of us made it through.” Minister of state in the Ministry of Foreign Affairs and Foreign Trade Leslie Campbell told the students that the Government was committed to getting them out of Ukraine. “It was always a priority. They [students] were trying to make arrangements to leave through the university…but the university wasn’t ready as they were not of the view that anything was going to take place,” Campbell told the students at the airport.

Death toll climbs to 63 in deadly Pakistan IS mosque attack

Sun Mar 6 , 2022
Support Village Voice News With a Donation of Your Choice. PESHAWAR, Pakistan (AP) — Officials vowed Saturday to hunt down and arrest the masterminds behind a deadly mosque attack in Pakistan a day earlier claimed by an Islamic State affiliate. The assault killed 63 people and wounded nearly 200. IS said in a statement the lone suicide bomber was from […] 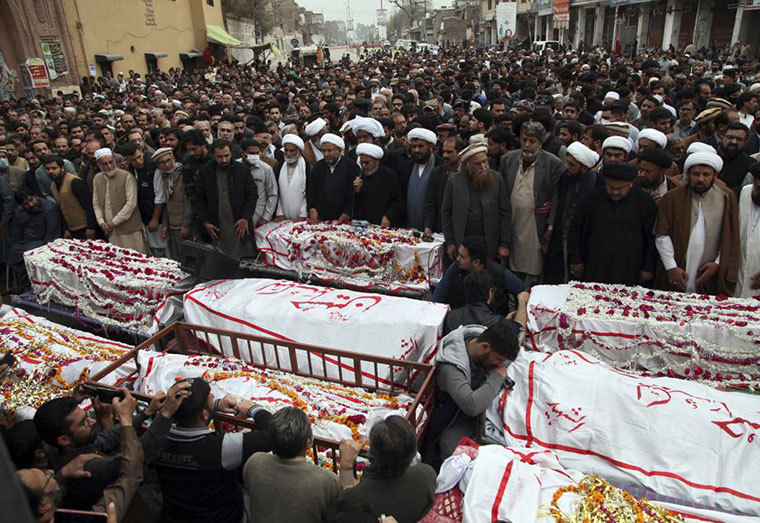