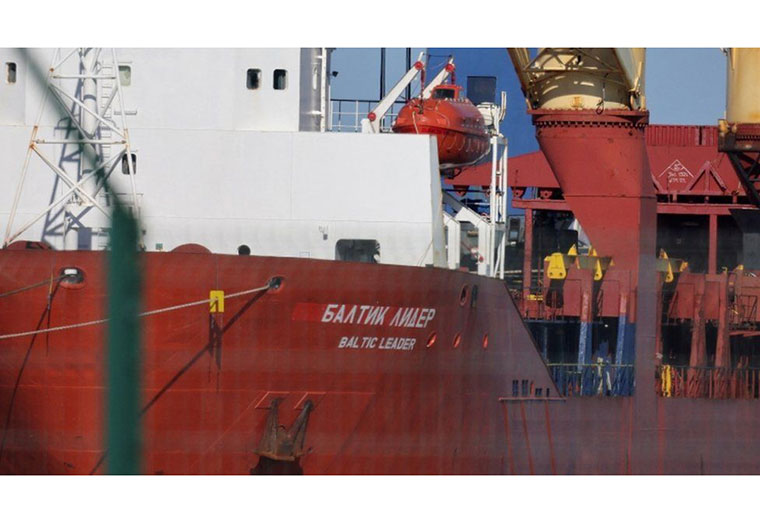 BBC – France has intercepted and impounded a Russian-flagged cargo ship suspected of breaching sanctions imposed because of the invasion of Ukraine.
The ship, the Baltic Leader, was heading from the north-western French city of Rouen to St Petersburg in Russia with a cargo of new cars.
It is being held at the Channel port of Boulogne.

Russian state media say the vessel is owned by a subsidiary of a bank targeted in recent EU and US sanctions.
A regional French official said such a measure was rare, but called it a sign of firmness.
The US Treasury Department has issued blocking sanctions against the vessel, saying it is owned by a subsidiary of Promsvyazbank, one of the Russian financial institutions hit by sanctions.
However, the bank has said it no longer owns the Baltic Leader. It told Reuters news agency that the ship was sold to another firm before the sanctions were imposed.

French officials said they were checking whether the vessel was linked to Russian financial interests and that the crew were “being co-operative”.
The process could take up to 48 hours, they added.
The Russian embassy in Paris said it would send a note of protest to the French foreign ministry over the seizure.

Sun Feb 27 , 2022
Support Village Voice News With a Donation of Your Choice. This past week we observed another anniversary of Guyana’s republican status. As we do every year, we wrap ourselves in the flag and put on our patriotic smiles as if everything is alright. It is an exercise that betrays a yearning for what we could be, but it also betrays […]