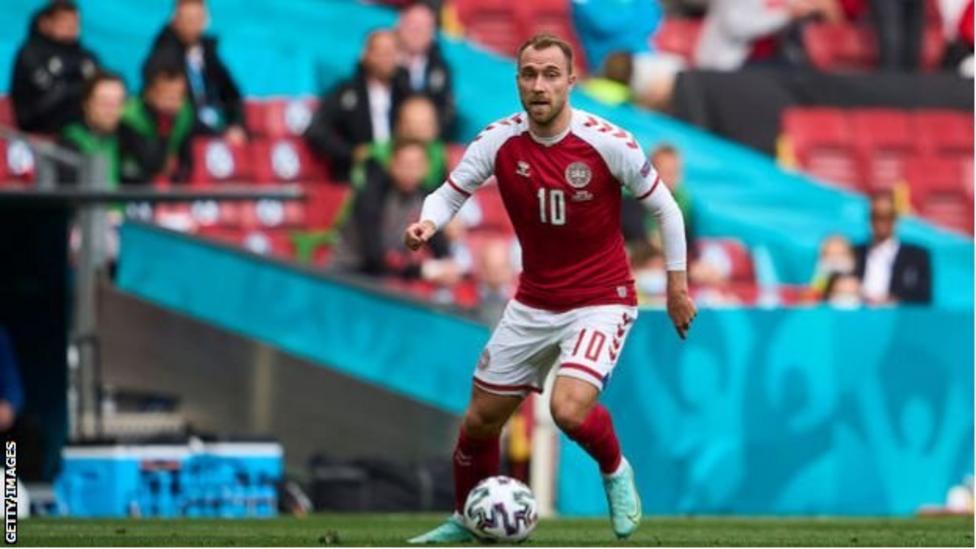 Eriksen had to be resuscitated on the pitch after collapsing shortly before half-time in Saturday’s match, then was taken to hospital.

The 29-year-old Inter Milan player is in a “good and stable” condition.

Braithwaite said he has “pictures in his head” he wants “to get rid of”.

“I am still emotional about the situation,” said the Barcelona forward. “Most importantly Christian is feeling better and therefore I am feeling better too.

“His health is the most important thing of all. It was important for me personally to see that he felt better via video. I had some pictures in my head from last Saturday that I would like to get rid of.

“We were all about to lose a friend and a team-mate. It’s not something you normally think of on a football pitch. Joy and love are normal. No one can prepare for what happened.”

On Monday, Eriksen’s agent Martin Schoots said he had spoken to the midfielder on Sunday and he was “making jokes” and “in good form”.

Only once informed that Eriksen was awake in hospital did the players agree to resume the match, with it restarting almost two hours after Eriksen’s collapse.

Uefa gave them the choice of continuing the game that night, or playing at noon on Sunday. Finland eventually won 1-0.

Denmark coach Kasper Hjulmand later said the game should not have restarted, while former goalkeeper Peter Schmeichel said it was “absolutely ridiculous”.

“None of the options were good,” Braithwaite said. “We took the least bad one. There were lots of players who were unable to play. We were in a bad place. We made the least bad decision.

“We were told we had to make a decision. That’s the only thing I can say. I wished there was a third option. Because I did not want to go out again. But Uefa said there were two options. We made a decision because we knew we would not be able to sleep that night.”

Denmark goalkeeper Kasper Schmeichel said: “We were put in a position that I personally feel that we shouldn’t have been put in.”

The Leicester City captain added he wished someone in a more senior position had said “that it wasn’t the time to take that decision, and that we should maybe wait until the day after to decide”.

Eriksen ‘wants to cheer on his team-mates against Belgium’

Eriksen remains in hospital in Copenhagen where his agent said he was having “detailed examinations” by doctors.

Speaking to Italian newspaper La Gazzetta dello Sport, Schoots said: “I spoke with Christian [on Sunday] morning. He was making jokes, I found him well, he was in good form.

“We all want to understand what happened to him, him too. The doctors are carrying out thorough tests, it will take a bit of time.

“He was happy because it struck him how much love there is for him. He has had messages from all over the world. Christian will not give up. Christian and his family want to send all their thanks to everyone.

“Now he just needs to rest. His wife and parents are with him. Also [on Monday] he will be kept under observation, maybe Tuesday too.”

Denmark play their second Group B game against Belgium on Thursday.

“In any case he wants to cheer on his team-mates for the game against Belgium,” Schoots added.

Schmeichel has visited Eriksen in hospital and said it “helped him a lot” after seeing his team-mate “smile and laugh”.

“We’re still in the tournament. Now we have to try to see if we can win this and do it for Christian and do it for all the fans who sat with us and were just as powerless in the situation as we were,” he said.

“I have no doubt that this team has the unity, the strength to be able to come together and go out and do something special.”

Mon Jun 14 , 2021
Support Village Voice News With a Donation of Your Choice. (BBC) Israel’s new Prime Minister, Naftali Bennett, has promised to unite a nation frayed by years of political stalemate. He said his government would “work for the sake of all the people”, adding that the priorities would be reforms in education, health and cutting red tape. The right-wing nationalist will […]