Once again, we are forced to comment on the poor quality of political leadership that Guyanese have been subjected to these last eighteen months. The crassness that characterises the conversations of most of the leaders is too much to silently bear. How many times have we had to learn of the lewdness that passes for debates in our country’s parliament? Heckling has been part of our parliamentary culture for as long as there has been a parliament, but one must make a distinction between political banter and cussing out. The latter has become normative in our elite political discourse. Though it is not confined to our political leaders, it is most pronounced within that group.

The recent comments by a government member to a female member of the opposite side is so distasteful that one is forced to ask where has the PPP found these people. What was going through that man’s mind when he uttered those words to a female in the halls of parliament? Where is the basic manners and decency? Where did this man learn his politics and public decorum? We understand that this is not the first time that such nasty sexist comments have been hurled at female members. To think that pornographic language has now become the language of choice in the National Assembly is to admit that we are failing ourselves as a nation.

We have editorialised in the past about the new iteration of political culture that has accompanied the rise of the PPP to office in 2020. In fact, one of our columnists continues to hammer away at the thesis that the manner in which the government came to power has a lot to do with its behavior since then. We have since witnessed a series of intemperate statements from Ministers of Government that have left a lot to be desired. This latest outburst falls in that category. One gets the impression that these officials believe that power puts them above sanction and rebuke. Only a few months ago, another male government member was accused of physically assaulting a female member of the other side.

What is worse about this latest episode is that the Speaker was quick to discipline a male member who rose in defense of the female member to whom the verbal abuse was hurled. We salute MP Sherod Duncan for showing the courage that was needed at that moment. No amount of retaliation by the speaker can trump an act of righteous indignation. We all as Guyanese should be outraged. This situation warrants more than a Facebook apology. The member has offended Guyanese womanhood in a way that is most despicable.

The member who hurled the abuse has to date not been disciplined. Beyond the partisan action of the Speaker, his failure to bring the offending member to book is nothing short of an endorsement of bad behavior in the House. We have arrived at the point where a female is not guaranteed from sexist abuse even the highest law-making body of the country. This publication lifts its voice in protest against this clear degeneration of our political fabric and calls on all organisations and the country at large to do so.

How much longer must the country put up with this obnoxious behavior by those who are the guardians of our collective governance framework? To date the PPP has not condemned the member—another instance in which the party puts partisan considerations over principle. Such a party is clearly unfit for high office. That party should hang its head in shame. Is this still the party of Cheddi Jagan? We think not. But in shaming itself, the PPP is shaming the whole of Guyana. It is high time we say no more of this assault on our dignity. No to Pornography in Parliament.

Sun Feb 13 , 2022
Support Village Voice News With a Donation of Your Choice. The Caribbean Examinations Council (CXC) on Thursday last held its 2021 Regional Top Awards Ceremony where nine Guyanese students were awarded for their outstanding performance at the Caribbean Secondary Examinations Certificate 2021 and the Caribbean Advanced Proficiency Examinations 2021. In a press release the Ministry of Education said due to […] 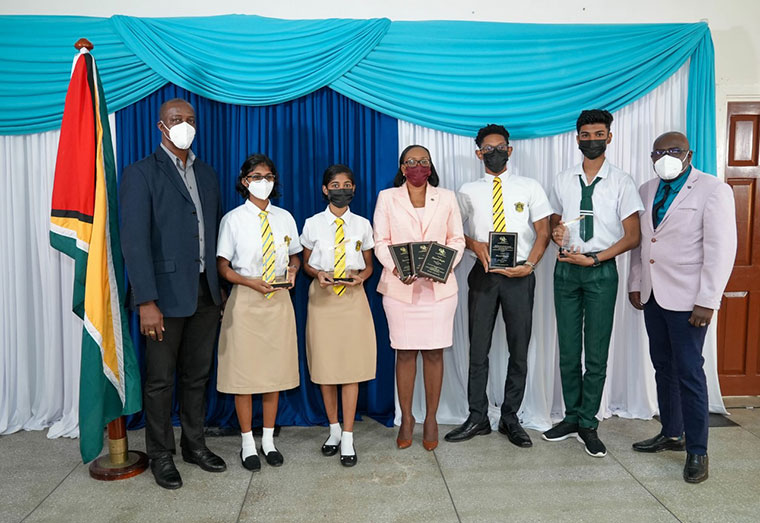