Finance Minister, Dr Ashni Singh said that significant growth in the gold subsector can be expected with declaration envisaged to continue to be dominated by small and medium scale producers operating 1,054 small scale mines and 25 medium-scale mines.

Presenting the 2022 budget last week Wednesday Dr Singh said beyond oil and gas, other extractives such as gold, bauxite, sand, stone, and other minerals will be major contributors to Guyana’s economy going forward. “Our Government recognises the critical role of the mining sector in the economy and will continue to invest in and promote the expansion of the sector, remaining mindful of the challenges and vulnerabilities as illustrated during the 2021 floods when operating sites and access roads were inundated and rendered impassable for an extended time,” the finance minister stated.

He said in 2021, Government initiated consultations with the Guyana Gold and Diamond Miners Association (GGDMA) on revisions to the Mining Act and Mining Regulations. Meanwhile, the Mineral Property Management System has been developed and will undergo testing in 2022 with the aim of being fully implemented. “This year, Government will re-focus on capacity building in the sector through the Guyana Mining School and Training Centre (GMSTC), and the partnership agreement with the GGDMA will advance through Mercury Free Technology Testing and Demonstration. Other plans for 2022 include the implementation of a revised Standard Operating Procedures (SOPs) for the diamond trade,” Dr Singh stated.

He noted that in 2021, the gold mining subsector represented 8.8 percent of our GDP – the third largest non-oil sector of our economy – and more than 60 percent of our total non-oil export earnings. “The vision for gold mining lies with the continued support for exploration to uncover new discoveries that can potentially transition to mining projects. At a strategic level, more focus on deriving efficiency from the mineral recovery phase of the small and medium scale mines can also help to promote sustainability.”

Meanwhile, new allocations of mineral properties last year saw 202 medium-scale mining blocks being awarded via lottery and 65 via an auction. Large scale operators are expected to come fully on stream in the medium term. At Karouni, while production will be paused this year, the investor will forge ahead with exploration and development of the underground prospect. Beyond this year, investment in the Toroparu area will finally result in long anticipated development of a full-fledged gold mine since an international mid-tier gold company has confirmed their interest in this project. Notably, development works to the tune of US$165 million are slated for 2022 and a further US$189 million in 2023, with production expected to commence in 2024.

Regarding bauxite, Singh said having lost one major producer in 2020 as a result of the hostile investment environment at the time, bauxite mining continued with only two major operators. The larger of the two operating in Linden has in place plans to expand investment in 2022 with an estimated outlay of US$16 million on capital investments. These include the construction of a third kiln and procurement of other heavy-duty equipment to improve the scale and efficiency of their mining operations. This third kiln is rated to have a throughput of 650 metric tonnes of bauxite per day and will increase the plant’s installed production capacity by 65 percent with operation expected to begin in the latter half of 2022. Government is committed to continue the exploration of opportunities for another large-scale investor to fill the void created in 2020.

Singh said with the construction boom underway particularly pertaining to the rapid expansion in housing and road projects, the development and expansion of the other mining and quarrying subsector is crucial. This expansion has the potential of lowering construction costs since the abundance of local, readily available resources could ease the impact of imported inflationary pressure on the cost of key construction materials.

In 2021, there were five new permits granted for sand and loam that cover some 525 acres. The acreage of the plots ranges from 25 to 283 acres and production is expected to expand significantly in 2022 and beyond. Critically, 2022 will see attention focused on ensuring beneficial occupation of sand-bearing properties along the Soesdyke-Linden Highway.

On quarry production, private investment in the sector will bring significant growth in output in 2022. Currently, there are seven active stone quarries, three in Mazaruni, two in Essequibo and one each in the Corentyne River and Northwest District. In 2021, 11 quarry licences were issued to new applicants, covering 30,737 acres with each having a productive capacity of 150,000-200,000 metric tonnes per year. Most of the new quarries are anticipated to come on stream by the end of 2022.

“Mr. Speaker, the manganese operation in Matthew’s Ridge was granted its Environmental Permit and Mining Licence, along with the approval of the Mine Plan. The project investment is pegged at US$75 million, and the annual production and shipment of manganese ore concentrates is targeted at 500,000 metric tonnes annually. The first shipment of manganese is slated for March this year from the Port Kaituma site.

Sun Jan 30 , 2022
Support Village Voice News With a Donation of Your Choice.  The U.S. Department of State’s Bureau of Democracy, Human Rights, and Labor (DRL) conducted training for members of the Guyana Police Force (GPF) and the Guyana Prison Service on human rights.    According to a US Embassy release, the training focused on the Department of State Leahy Law, which prohibits State assistance to foreign security forces if there is credible information that a security […] 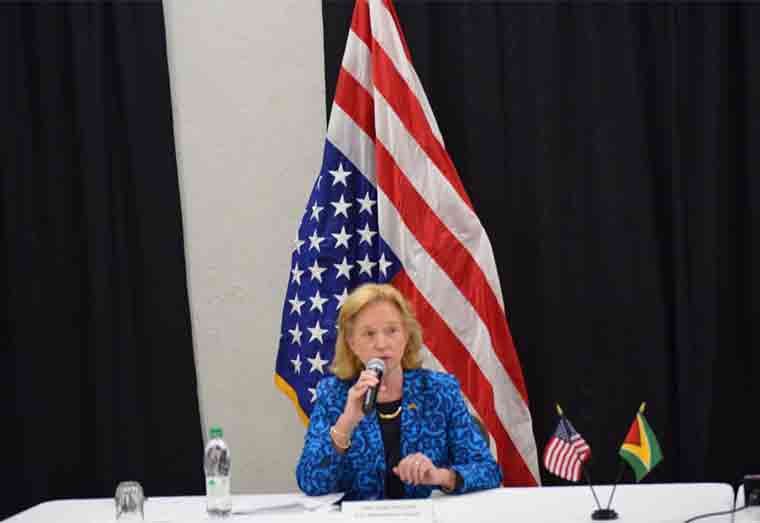