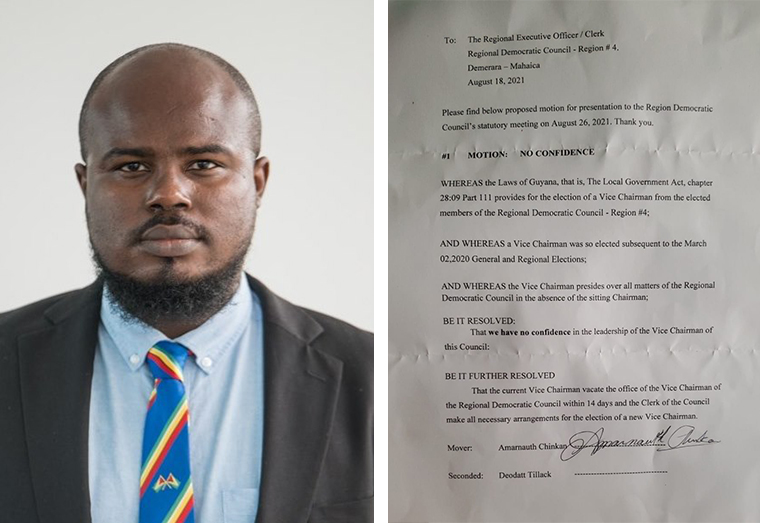 A Motion of No Confidence has been moved against Vice Chairman of the Region Four Regional Democratic Council (RDC), Samuel Sandy with a request for his removal from the position within 14 days from August 26, 2021.

The No-Confidence Motion, dated August 18, 2021, was moved and signed by Councillor Amarnauth Chinkan and set to be seconded by Councillor Deodat Tillack. It was proposed that the Motion be presented at the RDC’s statutory meeting on August 26, 2021.

Acknowledging that Sandy was elected in accordance with the Local Government Act and has authority to preside over all matters of the RDC in the Chairman’s absence, the motion stated:

Back in 2020, there was controversy within the APNU+AFC regarding the election of Sandy as Vice Chair as the AFC contended that there was a previously established agreement that the Vice-Chair position would go to an AFC Councillor.

However, Region Four RDC Chair, Daniel Seeram had placed the vote that gave Sandy the lead needed to secure the position. Seeram later told the media that he was unaware of such an agreement as expressed by the AFC.

These and other matters also prompted the resignation of former Public Infrastructure Minister,  David Patterson from the AFC. It also led to discussions between former President David Granger and AFC Leader, Khemraj Ramjattan. Opposition Leader, Joseph Harmon later stated that the issues experienced were caused by “miscommunication” between the two parties.

Sat Aug 21 , 2021
Support Village Voice News With a Donation of Your Choice. President Irfaan Ali recently announced the Government of Guyana will pay out another partial one-off $25,000 cash grant. This time specifically to old age pensioners, persons with disabilities, and public assistance recipients. Households using less than 75 kilowatt hours per month will get a credit equivalent to one month of […]