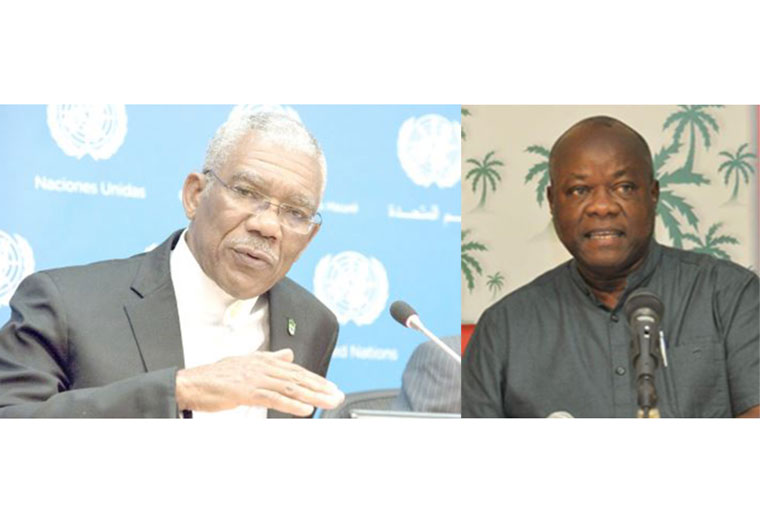 As Former President David Granger continues to hold on to the position of Representative of the List for the APNU+AFC Coalition amid calls for him to go, a top legal expert has said that the power to recall or appoint Members of Parliament lies in the hands of the parties contesting an election and not the Representative of the List who is a mere clerk performing an administrative function.

In fact, the constitution makes provision for the deputy representative of the list to step up if the Representative of the List is unable or unwilling to carry out his functions. And with the Alliance For Change signalling that it will support Aubrey Norton’s candidacy as Leader of the Opposition, should Granger fail to act on instruction to issue a notice of recall, the APNU+AFC is likely to call on the deputy who is Khemraj Ramjattan to act.

The legal expert who is also close to the People’s National Congress Reform executive noted in an interview with Village Voice News that the recent resignation of the Leader of the Opposition, Joseph Harmon has further ignited the debate surrounding Mr Norton, Leader of the PNCR, entering Parliament and becoming the Leader of the Opposition. The official said from the perspective of the PNCR executive, there seems to be some general confusion in the minds of many onlookers surrounding that process. “What seems obvious to the PNCR, and in accordance with the clear language of the Constitution, is that any notice of recall of an MP or MPs is triggered by the Party or Parties that make up the list (in this case the PNCR) losing confidence in the MP or MPs,” the executive who asked not to be named said. The official said once the Party signals to the Representative of the List, a loss of confidence, then he issues a notice of recall to the MP and forwards a copy to the Speaker. “The Representative of the List has no a priori powers. It is a nominated position. Anyone on the List can be nominated. His functions are administrative. It’s akin to the principal – agent relationship,” the executive stated. 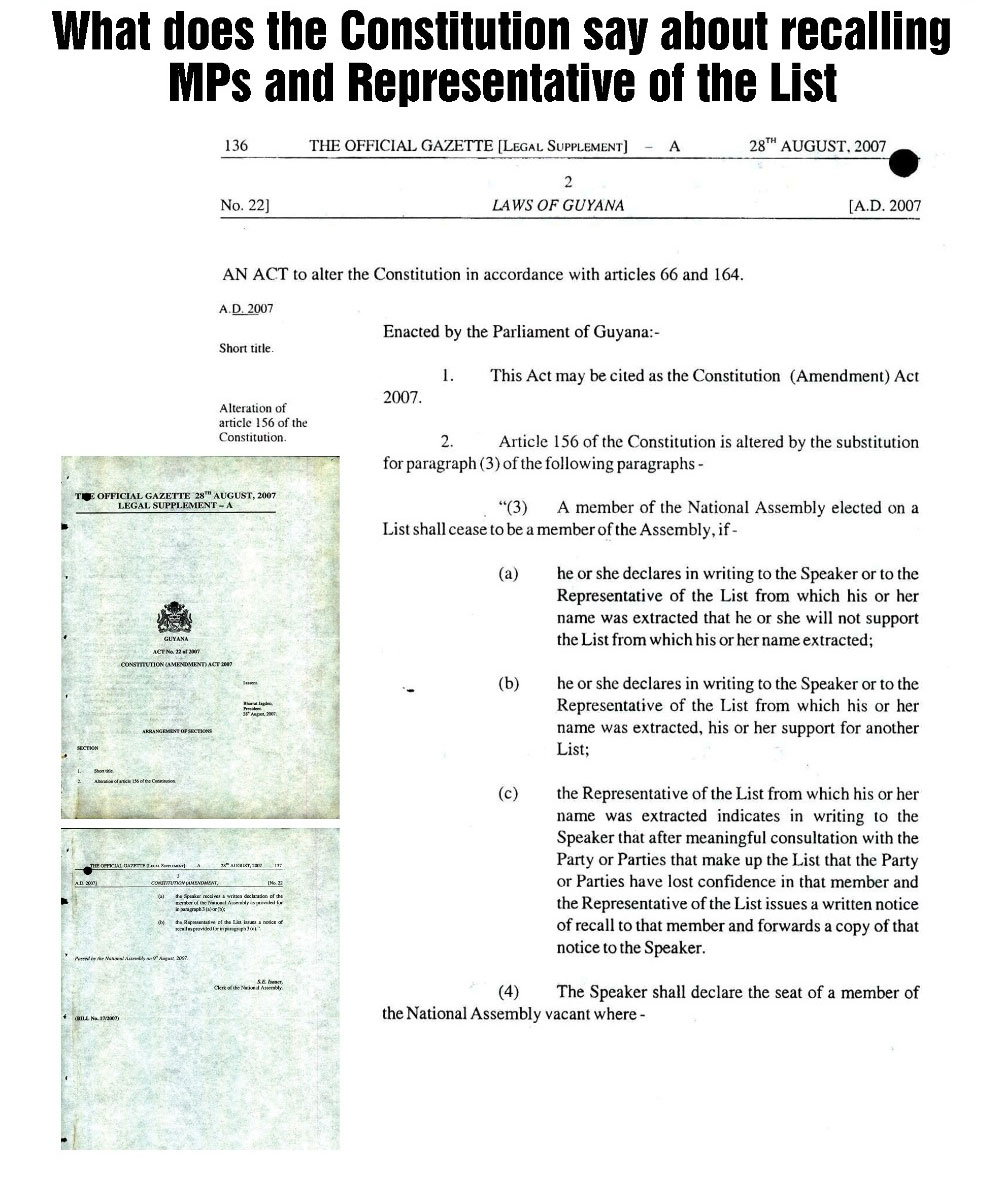 The legal expert said Granger who is the representative of the list for the APNU+AFC is not an independent agent, but rather one who acts on the directions of the Party or Parties. The top executive stated: “Additionally, you will not find anywhere in the Constitution or the Representation of People Act, terms such as ‘Leader of the List’ or ‘Head of the List’. These are manufactured expressions that contributed nothing but confusion to the simple functions of the Representative of the List,” the executive stated.

Granger who received no nomination for the recently held Congress of the PNCR seems bent on holding on to the post of representative of the list although stepping down as chairman of the A Partnership for National Unity (APNU) coalition last week. Reports are that he conveyed to officials at a meeting that the Constitution is silent on the possibility of a list representative being replaced after an election. His position contrasts with what was done only recently by Social activist, Jonathan Yearwood who resigned as the representative of the list for A New and United Guyana (ANUG). “If a lesser known party like ANUG and Mr Yearwood could have taken such a decision, why is a former President and a man who likes to claim he is abiding by the constitution, why can’t he follow suit and resign,” the PNCR executive said.
In a letter to the press announcing his resignation Yearwood said thusly: “This letter serves to inform all members of the public, who may be interested, that I have formally resigned from the position of Representative of the List for the A New and United Guyana political party. Last year I resigned from the Executive Council and as a member of the party. However, because of the ongoing confusion within the GECOM and their subsequent search for a Chief Election Officer, I had withheld my resignation. My resignation has since been handed in to GECOM on the 10th January, 2022.”
Step aside.

Meanwhile, only recently, also Political Analyst and former government minister, Dr Henry Jeffrey said both Harmon and Granger should have resigned “gracefully” from their positions, Dr. Jeffrey said he is surprised that the PNCR has allowed the matter to reach to this stage. “What they are doing is totally unacceptable; it needs no bureaucracy,” Dr. Jeffrey said. He noted that in the political system, leadership change is inevitable, and such change could take place at any level, at any time. “You are not a MP to stay there like a bureaucrat; you are a MP to take a walk when a new leader walks in,” he posited while pointing out that the situation is no different when there is a change in government or presidents.
In his initial response to call by PNCR’s Central Executive Committee for him to be replaced by Norton, Harmon had said his mandate as Leader of the Opposition was given by the APNU+AFC Coalition that contested the 2020 General and Regional Elections. “The main Parliamentary Opposition is the APNU+AFC coalition and consists of 31 Members of Parliament. The APNU Partnership has an established structure and if the executive of a party in the partnership has a position and they wish to express that position; they should follow the established procedures. The Office of the Leader of the Opposition is a constitutional office and is consequently governed by the constitution,” Harmon had said.

Communication Specialist, Audreyanna Thomas also had said that Norton, having overwhelmingly won the leadership of the PNCR, should serve as the Leader of the Opposition in Parliament. Like Dr. Jeffrey, Thomas said she is surprised that Harmon and Granger did not do the mature thing and resign from their positions immediately. She said currently, Granger and Harmon, do not have any position of authority in the party – the PNCR – they claim to represent. “How could Mr. Granger remain as the Representative of the List when he does not have the authority to speak on behalf of his party? How could Mr. Harmon remain the Leader of the Opposition, when he does not have the authority?” she had questioned. Thomas said they would have to seek guidance from Norton and the Central Executive of the PNCR.

Mon Jan 31 , 2022
Support Village Voice News With a Donation of Your Choice. ….MP Walton-Desir proposes that the money be redirected to public servants, pensioners, By Svetlana Marshall Predicting that $89B of the $552.9B National Budget would be wasted, A Partnership for National Unity + Alliance For Change (APNU+AFC) Member of Parliament, Amanza Walton-Desir urged the Government to redirect the money to the […] 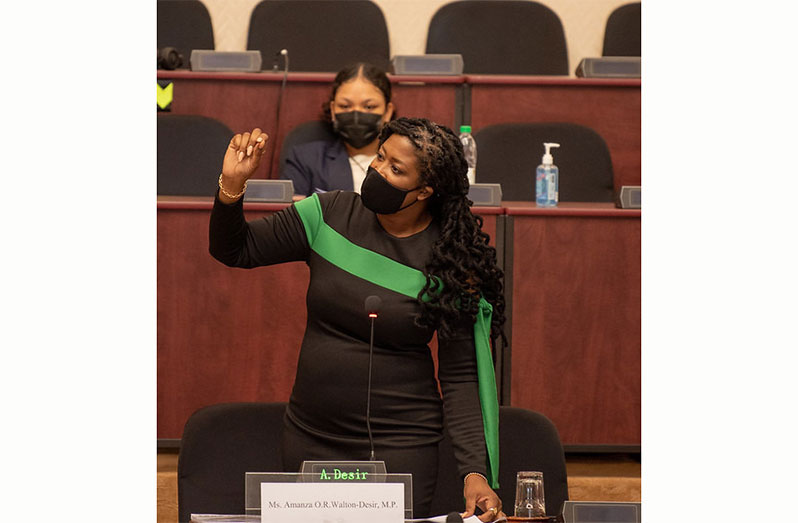