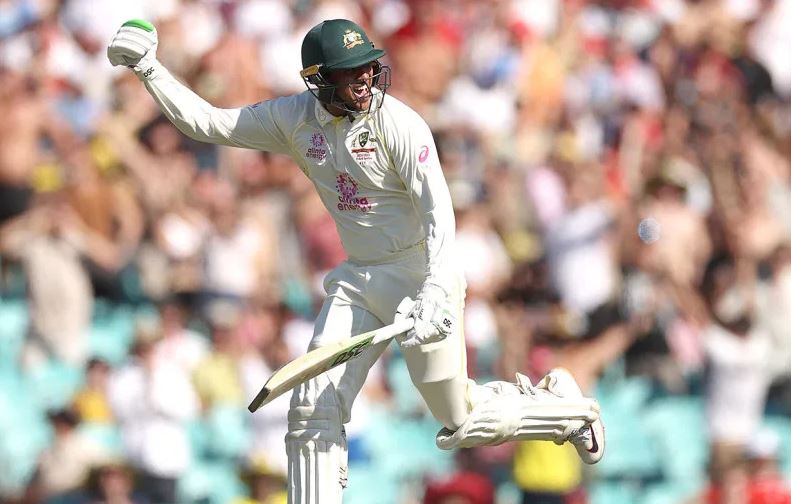 (BBC) Australia’s Usman Khawaja hit another classy century to leave England needing to bat out the final day to save the fourth Ashes Test at the Sydney Cricket Ground (SCG).

Khawaja made an unbeaten 101 from 138 balls, to follow his 137 in the first innings, as Australia set England an unlikely 388 to win.

With dark storm clouds closing in, England openers Zak Crawley and Haseeb Hameed survived a tricky 11 over and 50 minute period to reach 30-0 at stumps.

Crawley will resume on 22 and Hameed eight when play resumes at 23:00 GMT on Saturday, with 98 overs scheduled on the final day, when the forecast is mixed.

Khawaja shared a partnership of 179 with Cameron Green (74) for the fifth wicket as the hosts recovered from 86-4 to keep Australia’s hopes of a 5-0 series clean sweep alive.

Earlier in the day, England added 36 runs to their overnight 258-7, with Jonny Bairstow only able to add 10 more runs before feathering Scott Boland behind to fall for 113.

That left a first-innings deficit of 122 and continued a dismal series with the bat, with the tourists yet to reach 300.

Substitute Ollie Pope kept wicket for England – and did an excellent job, taking four catches – with Jos Buttler and Jonny Bairstow both spending the day off the field with hand injuries.

They – along with Ben Stokes, who did field despite ongoing troubles with a left side strain – have had scans and will continue to be assessed before the fifth Test, which starts in Hobart on 14 January

Khawaja’s innings was another masterclass and one that England’s batters could do far worse than watch and learn from.

The 35-year-old right-hander was hit by a venomous Mark Wood bouncer first ball and he started slowly and did not look fluent in his strokeplay, but importantly he was able to protect his wicket and guide the inexperienced Green, who was ragged for large parts of his innings, through a sticky period.

Australia were always in control of the game, but at 86-4 the door was slightly ajar for England, who had bowled well and were controlling the scoring rate.

The stand between Khawaja and Green firmly closed it again, and double padlocked it for good measure.

Khawaja, who has now scored more runs than any England batter other than Joe Root in the series, reverse swept, pulled and drove through the covers with an elegant grace for a well-deserved 10th Test century.

It marked a dream return to the Test fold for Australia and he was visibly emotional as he composed himself after the celebrations.

Before the Test he spoke about Travis Head – who tested positive for Covid-19 – reclaiming his place for the final Test, but Khawaja must surely now feature in Hobart.

Test Match Special commentator Geoff Lemon joked “there will be fights on the streets” if Australia try and drop him now.

England openers battle to close
The fact Crawley and Hameed’s unbroken partnership of 30 is England’s highest opening stand of the series summarises a challenging four weeks.

They had to battle, with the weather closing in and the light deteriorating, but there were very few scares.

Hameed edged well short of the slip cordon, while a rising Boland delivery hit the shoulder of Crawley’s bat and flew over the close catchers, but the openers have given England a chance of saving the Test.

In the field, England were excellent in the morning session and in the first hour after lunch to restrict Australia and create an opening, but as has often the case, they were unable to capitalise.

Wood again bowled well, taking 2-65, while Jack Leach had his best day of the series, in taking 4-84.

England set better, more attacking fields, for the left-arm spinner, who was denied a chance to take a hat-trick when Pat Cummins declared after Green and Alex Carey fell in successive balls.

‘England do have a chance’ – what they said
England caretaker coach Graham Thorpe on TMS: “I’m confident [that we can draw] that if we have the right approach and if we don’t go into our bunkers as well because I think when you’re playing for the draw you must keep that intent because it makes you move better and allows you to make better decisions.

“I want the guys to enjoy the contest tomorrow – Australia will come hard and tonight was a good example of our players’ temperament and technique being good.”

Australia batter Usman Khawaja: “I couldn’t stop smiling. I was grateful with one hundred, but I’ll take the second one too.

“It reminds me of an old-school SCG wicket. Hopefully it will be a dry day and we can get some reverse swing. Nathan Lyon will hopefully come into the game.”

Sun Jan 9 , 2022
Support Village Voice News With a Donation of Your Choice. (BBC SPORT) Tennis star Novak Djokovic had a vaccine exemption to enter Australia after a Covid infection on 16 December, his lawyers say in court documents. Djokovic was denied entry to Australia after landing in Melbourne this week to play in the Australian Open. The world’s top ranked tennis player […]