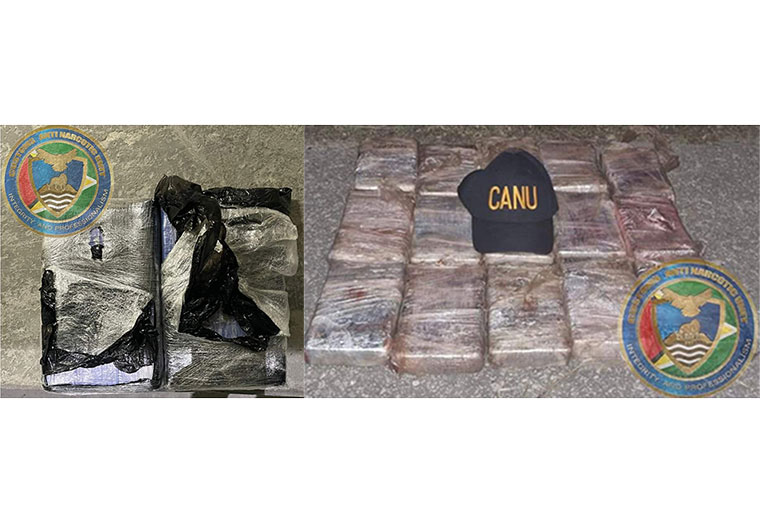 …bicycle man busted with $13.6M worth of cocaine in Campbellville

Ranks of the Customs Anti-Narcotics Unit on Monday found a man with a quantity of cocaine in Campbellville.

Acting on information CANU said it carried out a narcotics operation between Austin Street and Drurey Lane, Campbellville during the operation, the officers observed a male fitting the description they were looking for. CANU said its officers identified themselves and attempted to question the individual. “The individual attempted to escape from the officers and was eventually apprehended but not before crashing his bicycle into a parked vehicle,” a statement from CANU said. During the search of the individual, a brick-like object suspected to be narcotics was found inside a bag that was in his possession.

The individual was arrested and taken to his residence where a search was conducted in his presence and another brick-like object again suspected to be narcotics was found in this bedroom.

The individual along with the two (2) brick-like objects were taken to CANU HQ. At CANU headquarters, the objects were tested and weighed, the test confirmed that it was cocaine and had a combined weight of 2.374 kg (5.22 lbs.). It is suspected that this cocaine was going to be transshipped to the USA where it has a street value of around $66,000.00 USD (approximately $13,860,000.00GYD).

On Saturday last CANU officers acting on information conducted narcotics operations in the Tuschen-Parika area, East Bank Essequibo, during the operation, a motor vehicle with sole occupant was stopped and searched, resulting in the discovery of 15 brick-like parcels suspected to be cocaine.

The driver of the vehicle, Ryan Da Silva, a resident of Tuschen, East Bank Essequibo was arrested and escorted to CANU HQ with the narcotics, to be processed.

Wed Dec 22 , 2021
Support Village Voice News With a Donation of Your Choice. Canadian High Commissioner to Guyana Mark Berman has congratulated Aubrey Norton on his election as leader of the Peoples National Congress Reform. “On behalf of the Government of Canada, I would like to congratulate the newly elected leader of the People’s National Congress Reform, Mr. Aubrey Norton, and the new […]