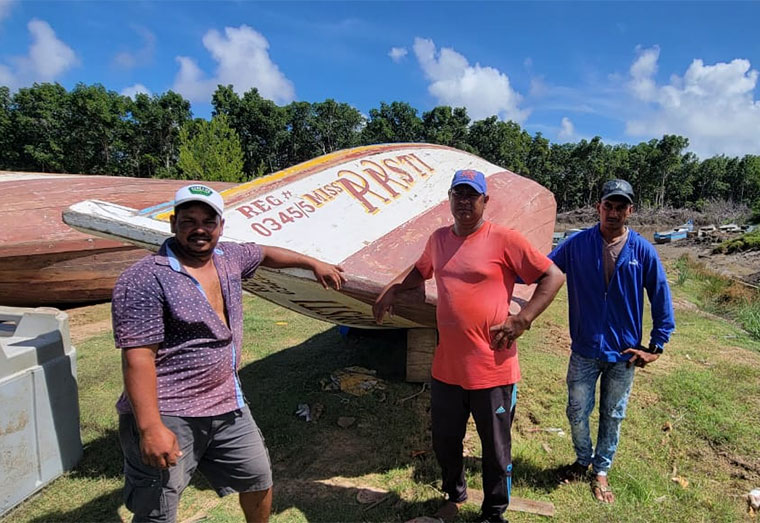 A young fisherman operating in the Atlantic ocean off the mouth of the Abary River in Region 5 (Mahaica/Berbice) has complained of a harrowing experience in which a trawler destroyed his fishing nets and then attempted to ram his vessel when he protested.
The incident last week apparently stemmed from a dispute over fishing grounds in the area.
Village Voice saw a video in which the reported incident occurred.

The video showed the Trawler named Esperanza 110 dragging away the fishing nets of the smaller vessel amid protests from the crew.
The victim, Captain of the smaller vessel, Twenty four year old Gopaul Narine of Novar Mahaicony told Village Voice that in the height of the incident he was forced to flee the scene in his boat because the Captain of the larger vessel showed intentions to ram his boat.
“This man steered his trawler straight for my boat. Myself and crew became fearful for our lives .We had to move away fast to avoid collision.”
Narine said that he reported the matter to the Fisheries Department and he has been told that they are now investigating the incident.
He estimated his losses to be in the vicinity of $400,000 and and added that this loss has been compounded since he has been unable to work since the incident occurred.

Village Voice has been told of another incident in which a Trawler had allegedly damaged nets belonging to a smaller fishing boat in a similar incident two weeks ago.
Meanwhile a source at the Fisheries Department of the Ministry of Agriculture confirmed that the Department is currently investigating complaints about the incident.

Mon Dec 20 , 2021
Support Village Voice News With a Donation of Your Choice. Ahead of today’s installation of Aubrey Norton as Leader of the People’s National Congress Reform (PNCR), his opponents Joseph Harmon and Dr. Richard Van West-Charles have offered him best wishes on this new journey. Conceding defeat on Sunday, Harmon, in a brief statement, said he respects the choice of the […]