‘’The concept of “ethnic blindness” can be somewhat equated with “color-blindness”. ‘The theory of color-blindness proposes that racial categories…. racial group membership and race-based differences should not be taken into account when decisions are made, impressions are formed and behaviors are enacted.’ This concept of Romitesh Kant explains well the conceptual framework of many of those in Guyana who require that we theoretically recognise and discuss the ethnic divide but take little account of it when important decisions are being made. Thus, in conditions of increasing ethnic polarization and claims of discrimination that negatively impacting peoples’ lives, ‘The primary tenet of this approach is that …. everyone should be treated as equal individuals. …. judged as individual human beings without regard to race or ethnicity’ (https://link.springer.com/content/pdf/10.1007%2F978-981-13-2898-5_153.pdf)!

As I suggested last week, the world is now coming to understand that this largely assimilatory approach to social development is untenable. Even those who had predicted the end of history with the fall of Russian Marxism are now busy attempting to find solutions to the many nationalist/ethnic conflicts that have erupted. For historical and purely selfish reasons the disease of ethnic blindness is prevalent in a Guyana socialised in a colonial British cultural and constitutional context best suited to homogeneous societies, where the notion of ethnic assimilation is still strong and the historical ethnic majoritarianism inherent in the PPP still prevails.

Thus, as reported recently in the media, a delegation from the National Bar Association of the United States of America, which mainly represents African Americans, visited Guyana and umbrage was taken when it enquired why there is not an African Bar Association in Guyana: a deeply divided ethnic society where there are all manner of complaints by the African population and their representatives about discrimination, unequal distribution, etc. How can such an enquiry possibly be offensive? Ethnic blindness! If people or institutions stop making an issue of race/ethnicity then they will go away and we will all live happy ever after!

Similarly, last week I also argued that the majority of our political leaders have been afflicted by this virus. While most of them will accept that this society is ethnically politically divided, notwithstanding worldwide evidence of the disruptive nature of ethnic alienation, they tend to view it as a temporary condition. Even the politicians whose interest are stymied by this approach rather than confront the problem believe that it will go away if we adopt amelioratory strategies ranging from total blindness, co-opting a few of the other ethnicities in the party’s leadership, proposing high flung theoretical constructs such as ‘One Guyana,’ institutionalizing social cohesion ministries, and so on. In the mean time they seek to find other, sometime illegal ways, e.g., elections manipulation, to address their ethnic concerns.

However, the disruptive nature of ethnic association has shown its resilience and others have recognised that unless appropriate political accommodation is made, ethnic conflict will persist and possible escalate. The Venice Commission of the European Union stated in 2013, ‘During the last ten years and the upheavals which have occurred in Europe, the protection of minorities has once again become one of the major preoccupations of European public law specialists. Far from being an academic subject reserved for those specializing in constitutional law and political science, it is central to political debate and to achieving the three fundamental principles of Europe’s constitutional heritage … democracy, human rights and the rule of law. The involvement of members of minorities in the various aspects of life in society is an important factor in their integration and in the prevention of conflicts.’
Depending on the national context, such participation ranges from involvement in local institutions to the situation in Belgium where ‘The body of institutions is conceived in such a way as to establish a balance between the different linguistic groups. Moreover, in certain areas which are mixed from a linguistic point of view, adjustments have been made so that electors from different linguistic communities are represented in the elected body.’

The government has published for ‘consultations’ the first tranche of its elections amendment proposal, and there is a body of opinion which holds that since as in most places, these kind of proposals can be changed by a simple majority, if the government has a majority it could legitimately reject every suggested change. This is ethnic blindness. Responsible people had better warn the regime that it cannot legitimately so act and that it is courting justifiable resistance if the new rules are brought about without proper consultations and consensus.

Any other approach is unjust and over the years this column has repeatedly argued that since elections are what bring governments to office, changing to the rules of the game requires consensus. This is particularly important where the society is ethnically divided and the parties representing the major ethnic groups are claiming that the changes are not merely egregious but will also operate to the advantage of those proposing the reform.

Sun Dec 12 , 2021
Support Village Voice News With a Donation of Your Choice. By Rawle Lucas Trading Frequency In the month of November, five stocks were active. Figure 1 below shows that the most active stocks were those of DIH and RBL which traded in each of the five trading periods during the month. The stocks of DTC traded four times during the […] 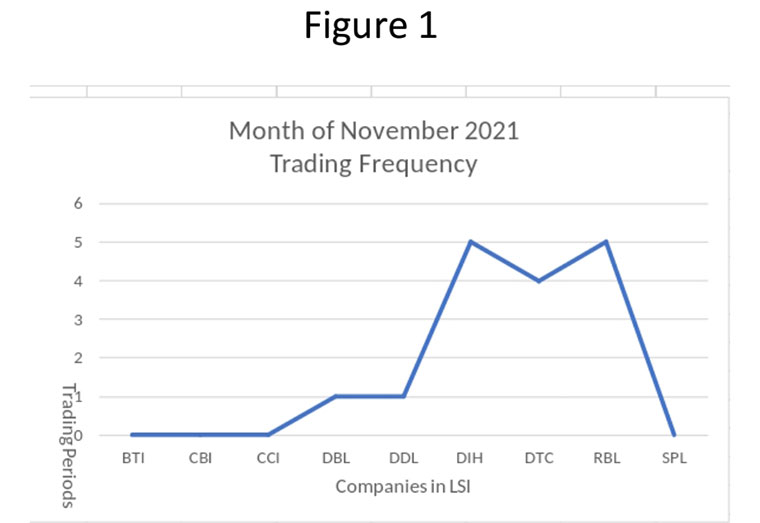