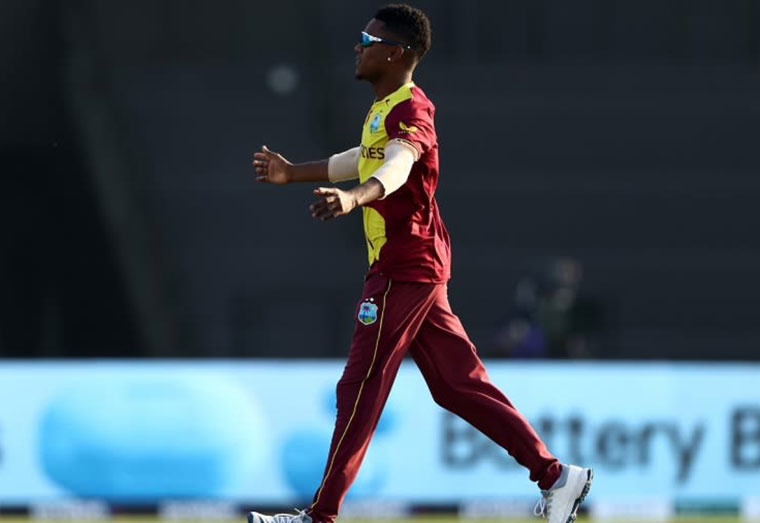 (CRICINFO) Akeal Hosein’s thrifty left-arm fingerspin has been a key ingredient behind Trinbago Knight Riders’ sustained success in the CPL in the recent past. Over the last three CPL seasons, he has an economy rate of 5.56 in the first six overs. Only Sunil Narine, Mujeeb Ur Rahman and Mohammad Nabi have better economy rates than Hosein among bowlers who have bowled at least 100 balls during this period.

After Fabian Allen was sidelined from the T20 World Cup with injury, Hosein stepped in as his replacement and fronted up to bowl with the new ball for West Indies too. Hosein has embraced the challenge of getting hit and can perform the dual role of taking wickets as well as holding up one end.

“Bowling in the powerplay is always difficult – let me say that firstly, with just two men protecting the boundary for us,” Hosein told ESPNcricinfo during his stint with Delhi Bulls in the Abu Dhabi T10 league. “Having said that, it’s a different job, a difficult job that has to be done and I gladly put my hand up for the team. It boils down to clear mindset and execution. We have bowling meetings and what not. You’re going to go for runs and you’re going to be hit at some point, but it boils down to execution. If you have two guys out, if he has to hit a boundary, make sure he has to hit to the left or right of those guys.

“The mindset or the task required from me varies. Sometimes your team just wants a quiet powerplay, so they want to plug one end. And sometimes the skipper comes to you and says we need a wicket. So, you need to switch on or switch roles. But the most important thing is to be happy about it. At the end of the day, for me it’s about doing whatever job the team requires. So, if the team requires me to keep it tight at one end or go for wickets, that’s definitely what the team needs at that point.”

Hosein got just one game during Bulls’ run to the T10 final, but he believes that working in the nets against some of the best short-format players has contributed to his growth. Prior to the T20 World Cup, for which Hosein was initially picked as a travelling reserve, he was a net bowler for Kolkata Knight Riders in the IPL, along with fellow West Indian Odean Smith.

“Sometimes you may be in teams where you may not be playing all the time,” Hosein pointed out. “But just to be there, rubbing shoulders with the senior guys, being able to ply your trade at the nets and face challenges at the nets like coming up against the best in the world… there and then you get the experience. It doesn’t always have to be on a cricket field, but just in a dressing room, sharing with those guys. It was the same thing for me at the World Cup with the West Indies.

Hosein was originally a batting allrounder who bowled left-arm wristspin, but then shifted to left-arm fingerspin when he was working his way back from a shoulder injury, ahead of a 50-over tournament for his club in Trinidad. He is now more of a frontline spinner for West Indies, but he’s keen to show his batting chops in top-flight cricket.

“Growing up, I was an allrounder,” Hosein said. “I still keep reminding myself [of] that and even let coaches know that. But it’s just unfortunate at the moment to move up in these teams [like Bulls and West Indies] that have world-class players. But, having said that, I continue to put my work in the nets so that when those opportunities arise, I can grasp it.

“I bowl chinaman [left-arm wristspin] as well. When I was playing for Queen’s Park Cricket Club back in Trinidad and whilst I was doing rehab for my shoulder, there was a very important 50-over club tournament coming up and they badly needed me to play. They didn’t want me to sit out or what not. I told them I’ll bowl left-arm orthodox and I just stuck with it after that.”

Hosein has become a more potent white-ball spinner after adding the knuckle ball and the swinging arm ball to his repertoire. He revealed that he has been working on expanding his variations.

“Yes, using wristspin as a variation did also cross my mind,” Hosein said. “One of the guys that told me I should include that as a variation was Sunil [Narine]. Just working on a couple of deliveries to make sure you can include that needs some work. As I said, left-arm wristspin or wristspin on the whole isn’t an easy job. [I am] working on a couple of new deliveries and one of that will definitely be included.”

Hosein has a particularly strong relationship with Narine, having not just played with him at Trinbago Knight Riders in the CPL but also at the Queen’s Park CC in Trinidad.

“He’s very quiet but he’s a very open guy as well,” Hosein said of Narine. “You can go to him for tons of advice. We play for the same club, so I’ve known Sunil for umpteen number of years and he’s just a call away or a text away. As I said, he’s very open. A guy of his quality and stature, he doesn’t have to pass on any information; some guys keep all the information to themselves and Sunil is definitely not one of those guys.

“Sunil will show you everything he knows and shows ways to trick batsmen or shows a new skill he thinks that maybe isn’t working for him but can pass on information. He’s definitely someone you can go to for experience. He will give you experiences in matches – how he was thinking, what he was trying and he will give you a full rundown.”

Hosein is often mistaken for Khary Pierre, his TKR team-mate and childhood friend. They both went to Success Laventille Composite School before playing together in the CPL as well. Pierre is also adept at pinning down batters in the powerplay with his left-arm fingerspin.

“Khary is more of a brother to me,” Hosein said. “We get mistaken and I’ve heard that a lot (laughs). We both do similar jobs and one thing I always tell him is when we play together we feed off each other’s performances and thrive and play even better. I always look forward to sharing the cricket field with Khary and even off the field we hang out a lot and stay close.”

Hosein is fairly familiar with Pakistani players, having played with and against them at the CPL and the T10 league. The T20I leg of Pakistan’s tour to the Caribbean was marred by rain, but the upcoming series in Pakistan will be Hosein’s chance to firm up his spot as West Indies prepare for life without their senior players.

Manchester United: Ralf Rangnick will not try to convince Paul Pogba to sign a new deal

Sun Dec 12 , 2021
Support Village Voice News With a Donation of Your Choice. (BBC SPORT) Interim boss Ralf Rangnick says he will not try to convince midfielder Paul Pogba to stay at Manchester United if he has made up his mind to leave. Pogba, 28, re-joined United in a then-world record £89m transfer from Juventus in 2016. However, the French World Cup winner […]