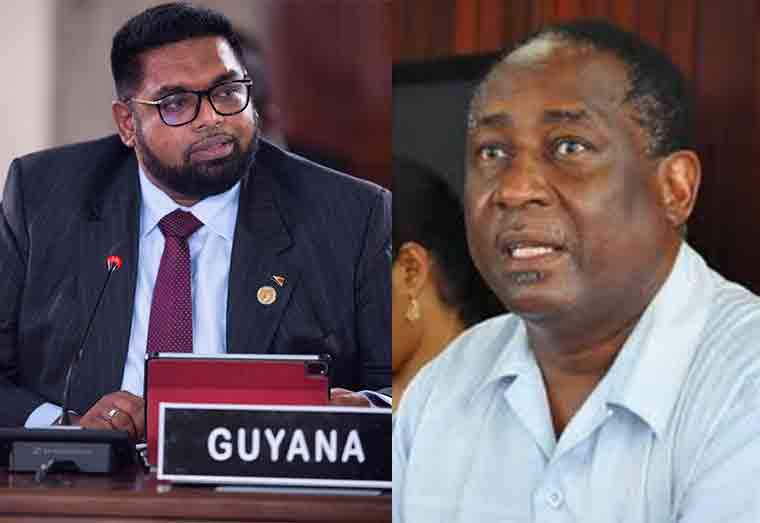 The Guyana Public Service Union has flayed President Irfaan Ali for comments he made last week trying to tie their demands for a just salary increase for workers as political activism.

See below the full statement of the GPSU
The leadership of the Guyana Public Service Union (GPSU) takes serious umbrage to the “so called Trade Unionist” comment made by President Mohamed Irfaan Ali during a press briefing carried internationally on YouTube today November 26, 2021. This comment is unbecoming of a leader, who admittedly conspired with members of his administration to betray their collective Oaths of Office, the trust of employees of the State and the Nation as a whole when they opted to sideline the legally binding Collective Bargaining process and unilaterally impose a seven percent increase upon workers. Trying to explain to the nation that the imposed percentage increase was sufficient does not take away the all-embracing fact that the process used was unlawful.

For one and one-half years the Ali administration frustrated the Collective Bargaining process and ignored requirements of the Constitution, Laws of Guyana, Parliament approved ILO Conventions and the legally binding Agreement for the Avoidance and Settlement of Disputes signed between the GPSU and the Ministry of the Public Service for the Government of Guyana. As if this was not enough, President Ali acted out a charade, where he impressed the nation that talks were on going with GPSU, even though the Union was never granted audience. This was blatantly misleading and was capped by Minister Parag’s addition that time to undertake the process was insufficient. Insufficient! GPSU first engaged Government on the matter in September 2020, but Minister Parag, the leader of the Government’s delegation, stated that she had no mandate to negotiate. Without ever engaging the Union again, it was barefaced to tell the public that time was insufficient. Isn’t this laughable? Laughable yes, but it is also the epitome of incompetence and dishonesty.

To pontificate that the Union’s advocacy was as a result of political activism is to try to detract from the PPP/C administration’s pellucid disregard for the legal and lawful requirements. Hence, anyone, who subscribes to the lawless impositions on workers is no more than a stranger to the truth and moreover, repressive and tyrannical.

The GPSU has always decried Governments’ hijacking of the Collective Bargaining process, repeatedly, throughout the 23 years of previous PPP/C governance and even during the recent AFC/APNU administration. This is a known fact that all and sundry are aware, even President Ali and other PPP/C members of Parliament, who while in Opposition in the 11th Parliament alluded to the fact that Public Servants salaries should be increased in keeping with the GPSU’s representation. To now call GPSU’s resentment of the unlawful and disdainful hijack a political intervention is not only glaring and absurd, but also brazen.

The GPSU had several confrontations with the PPP/C while in Government and there were agreements entered into to resolve those disputes. The PPP/C always resorted to the unenlightened accusation that the Union was being political, but GPSU dares President Ali to point out a single political clause in those settled agreements.

The GPSU would like to reiterate that the government’s conduct in this matter was unconstitutional and unlawful, as well as, in conflict with the relevant legally binding agreement between the GPSU and Government of Guyana. It is also a departure from recent personal public commitments given by President Ali to act in accordance with the Constitution and Laws of Guyana and consistent with his Oath of Office. Also, it was expected that the President would have shown strong leadership by directing that his public commitment to negotiate with the GPSU was respected.

The GPSU demands that the Government of Guyana act in accordance with the Labour Laws of Guyana and display care and respect for all workers, equally. The GPSU demands also the payment of a living wage and the unscrupulous deduction of taxes from workers in receipt of meagre wages and salaries of less than $100,000 should cease forthwith. GPSU would like to reaffirm that the 7% imposed should be treated as an interim payment and that it should be tax free pending the outcome of the legitimate process.

Last but not least, independent Trade Unionists in Guyana are well acquainted with the perception that the Government is in collusion with the private sector to keep wages and salaries at a minimum, in order to exploit the labour force. This is why it appears that the Government cannot find apt justification to deal with labour exploitation by foreign companies, to the extent where Guyanese were physically assaulted.

If that is the case, Guyanese would forever face repressive methods from employers, who put profits over people. Our beloved Country would be blessed to have leaders such as German Chancellor Angela Merkle, a fine example to leaders of this era.

GPSU has conveyed by correspondence dated November 26, 2021 to President Ali among other things its resentment and rejection of his loose descriptive public utterances in relation to Trade Unionists, who are genuinely pursuing merited and necessary improvements in remuneration and conditions of service for Public Service workers, at State House today November 26, 2021. Please see correspondence attached.

Sun Nov 28 , 2021
Support Village Voice News With a Donation of Your Choice. The death toll from the Covid-19 disease has reached 986 with the death a fully- vaccinated 69-year-old woman of Region Three.In a press release the Ministry of Health said that as of November 26, 2021, one other person who tested positive for the novel coronavirus (COVID-19) has died. This takes […]