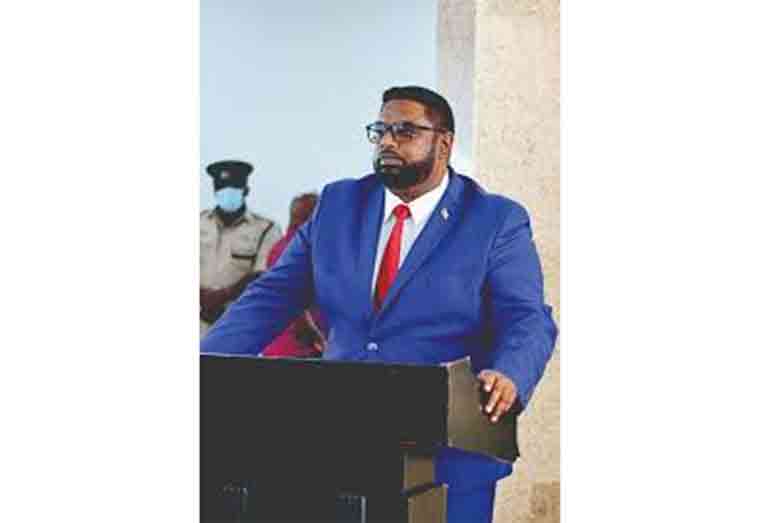 Opposition Member of Parliament, Tabitha Sarabo-Halley said by offering a 7% across the board increase for public servants, President Irfaan Ali, in effect, has given himself an increase of $150,000 while offering minimum earners $4,900 before tax.

“The public servant who is earning minimum wage would receive a monthly salary increase of a mere $4900 while the president who is earning $2 million dollars plus will be receiving a $150,000 increase.  Worse still, is that the minimum wage earners must pay taxes on their salary increase while the president will not,” MP Sarabo-Halley told reporters during a press conference on Friday.

Noting that the “stark contradiction” highlights the major difference between the A Partnership for National Unity + Alliance For Change (APNU+AFC) and the People’s Progressive Party/Civic (PPP/C), she pointed out that under the coalition government, senior public servants were awarded a lower percentage increase than junior public servants, thereby ensuring that the income gap would reduce overtime.

“The PPP’s single rate across-the-board increase is intended to widen the gap between those who have much and those who have little. In a time when world – over, emphasis is being placed on equity, the president chose to reward himself and Ministers with a 7% increase amounting to $150,000 tax free for himself, $120,000 for the AG and PM and 60,000 for other Ministers knowing very well that the public servants who work for minimum wage will be taking home an increase of $3528 Guyana dollars after tax (that cannot even buy a bottle of cooking gas),” the APNU+AFC Parliamentarian reasoned.

Weighing in on the matter, Leader of the Opposition, Joseph Harmon refuted claims made by President Ali that senior personnel within the public service resigned under the Coalition Government because they received a smaller percentage of increase when compared to minimum wage workers. This Harmon said is furthest from the truth, noting that the scale system was fully embraced by workers.

“If you want to bring equity and justice, you will never try to use equality to bring that because equality would not give you that. Equality will continue that system of inequity,” Harmon reasoned.

The Opposition Leader also rubbished claims by the President that the Coalition Government forced contract workers within the public service to go on the ‘Fixed Establishment,’ and in doing so cut their benefits. For the record, Harmon said workers willingly crossed over to the ‘Fixed Establishment’ in keeping with recommendations from a Commission of Inquiry (COI) into the Public Service.

“This was an option which was given to persons, and some persons when they entered into the Public Service, they were looking for a career, and so a career suggest a progression from one stage to the next to the next, and those persons on the ‘Fixed Establishment’ recognized that is where the security of tenure lies. Those who were on contracts, the contracts could be terminated at any time, as had happened since this regime came into office, and so over 5,000 public servants opted to go onto the Fixed Establishment. Others who did not opt to do so are still on contracts,” Harmon clarified.

She said Guyanese have every right to be disheartened given the private sector-centered measures, which were included in the last two budgets, with the intention of cushioning the impact of the current economic storm. “What this regime has done in two years is place billions of dollars back into the pockets of their friends and families while giving a pittance to the public service who toil day in and day out to keep the government running. The same public servants who this very PPP has to rely on for the development and growth they constantly boast is just around the corner for our country,” she said.

President Ali, in his address on Friday, said the 7% is intended to complement measures already implemented such as the 25,000 COVID-19 cash grant, but the Opposition MP said the reference to the one-off cash grants is weak attempt to justify inadequate increase.

“This 7% percent increase reveals the uncaring and unconcerned disposition of this PPP regime and shows just how deceitful they are in both word and deed. Most of all, it highlights the fact that the PPP is no good for Guyana,” the MP said.

MP Sarabo-Halley said unlike the PPP/C Government, after just 18 months in office from July 1 2015 to January 1 2017, the APNU+AFC increased the minimum wage by over 50 percent, increased the income tax threshold by 20 percent, reduced the marginal income tax rate to 28 percent and removed the tax from employees’ contribution to the National Insurance Scheme (NIS). In addition, old-age pension increased by 45 percent and public assistance by 27 percent.

Chelsea: Father of Reece and Lauren James on his children's rise to football stardom

Sun Nov 28 , 2021
Support Village Voice News With a Donation of Your Choice. (BBC SPORT) For Nigel James, football is a family affair. But when he is not watching son Reece or daughter Lauren play for Chelsea, he is managing his own coaching business and helping young people thrive. He looks after players from ages five to 18, and he set it up […]