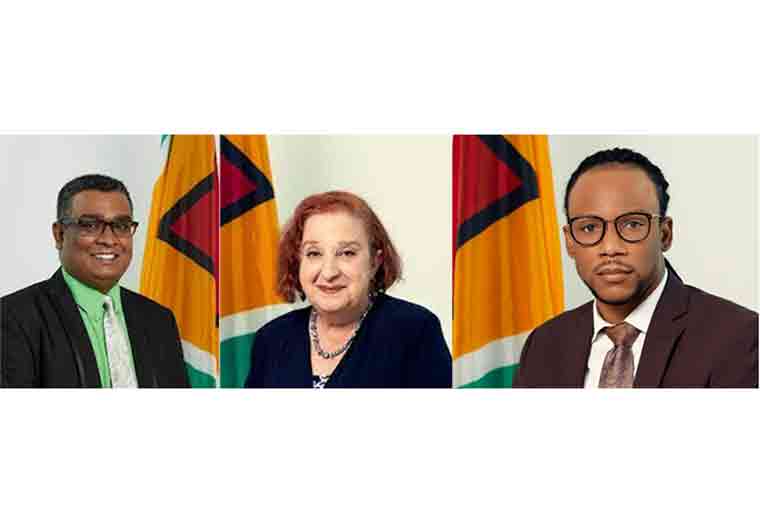 After a four-month hiatus, a sub-committee of the Public Accounts Committee (PAC) is expected to meet this week to shortlist nominees for the Public Procurement Commission (PPC).

During a meeting of the PAC on Monday (November 22), Opposition Member of Parliament, Ganesh Mahipaul expressed concerns that after more than five months, the sub-committee, which comprises Chairman of the PAC, Jermaine Figueira, MP and Government’s Chief Whip, Gail Teixeira, MP has not completed its work.  After deliberating on the matter, it was agreed that the sub-committee will meet this week.

But on the corridors of the Public Buildings, the Chairman of the PAC laid the blame at the feet of the Government’s Chief Whip.

“Unfortunately, Ms. Teixeira was extremely busy, so to speak, that we were unable to meet, even though many times I would have indicated to her my availability for us to meet,” MP Figueira told reporters.

However, he noted the Government’s Chief Whip indicated on Monday that she will make herself available during the course of the week to aid in the shortlisting process. Approximately 23 nominees were submitted to the PAC for consideration.

“I am optimistic but that optimism is somewhat sketchy right now because of what would have transpired but I am still hopeful that this committee could be established before the year concludes and the Public Procurement Commission becomes active,” the PAC Chairman told reporters.

October 2021 marked one year since the Public Procurement Commission expired, and plans to reconstitute it appear to be moving at snail’s pace, though under Article 212 W of the Constitution it is responsible for the monitoring of public procurement with the aim of ensuring that the procurement of goods, services and the execution of works are conducted in a fair, equitable, transparent, competitive and cost effective manner.

In the absence of the PPC, MP Figueira said the Opposition has been inundated with complaints from contractors, who believe that they are being treated unfairly during the procurement process.

“Multibillion-dollar contracts have been given out by Cabinet and the role of the Public Procurement Commission is pivotal with respect to contracts being distributed. Aggrieved contractors would go to the Commission and make their concerns known; so the perception is that corruption is afoot with regards to a lot of these multibillion-dollar contracts that government has been awarding,” he said while underscoring the importance of having the PPC reconstituted.

Just recently, concerns were raised over the decision to award a $346M contract to ‘Statement Construction’ for the construction of a primary school at Bamia, Region 10.

Registered approximately six months ago – the construction firm is owned by the proprietors of Hits and Jams Entertainment and the Kashif and Shanghai Football Organisation – known associates of the PPP/C Government.

In the absence of the ‘procurement watchdog,’ Cabinet also granted its no-objection for the Ministry of Public Works to enter into a US$256.6M agreement with China State Construction Engineering Corporation Ltd for the construction of the New Demerara Harbour Bridge (NDHB). It has also given the greenlight for China Railway Group Limited to execute the controversial Amaila Falls Hydropower Project (AFHP) based on a Build-Own-Operate-Transfer (BOOT) model.

Speaking on the sidelines of the PAC meeting, MP Mahipaul said he felt compelled to raise the issue due to the prolong delay.

It was pointed out that the sub-committee, tasked with shortlisting the nominees for the PPC, was formed on July 7, 2021. “That was at the 10th Meeting of the Public Accounts Committee. They met on the 20th of July; that was their first meeting. We are now on the 23rd meeting of the Public Accounts Committee, and they have not provided us, at the level of the PAC, with any movement that can point in a direction that they are treating this matter with the absolute urgency that it requires,” MP Mahipaul told reporters.

It was noted that the sub-committee met once after the July 20. According to him, meetings were not held in August, September, October or in November despite the availability of the Chair of the PAC.

Mon Nov 22 , 2021
Support Village Voice News With a Donation of Your Choice. Carl Craig, the 50-year-old driver, who was involved in the horrific accident at Caledonia that claimed the lives of a Linden couple on November 18, was placed on a total of $1M bail. The Guyana Police Force, in a statement, said Craig, who resides at Soesdyke, was charged with two […]