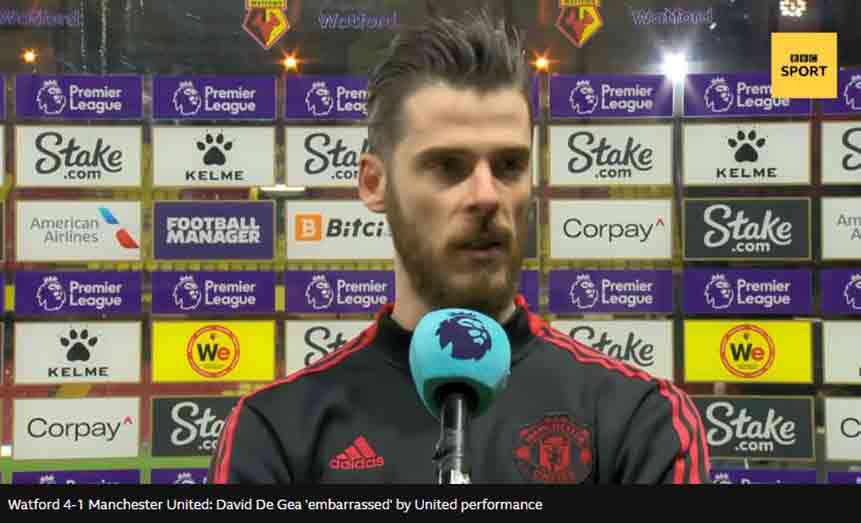 United boss Ole Gunnar Solskjaer is under pressure after his side fell to seventh in the Premier League, amid a run of one league win in seven games.

Captain Harry Maguire was sent off at Vicarage Road and the Hornets also had a penalty saved. “It was embarrassing, the way we played today,” De Gea told BBC Sport.

“The first half was very poor – it’s not acceptable for this club and the level of players that we have. It’s another nightmare. There’s been some difficulties but I don’t really know what to say. “I have been in difficult moments with this club but we are in a difficult situation – we don’t know what to do with the ball, we are conceding a lot of goals. It’s a horrible moment.

“It’s easy to say the manager and staff but the ones who are on the pitch are the players and they’re the ones who have to score goals and fight on the pitch. We need to look at ourselves one by one and give more for the club and the fans. It’s difficult to say why there was a performance like this – I don’t know what to say. “It’s hard to be in the dressing room now – we are sad, we are angry. Personally I’m hurt – it’s a very difficult moment for the whole club.”

‘We have let ourselves and the fans down’

United’s win percentage in the Premier League since Boxing Day 2020 is now below 50% with 18 wins from 37 games.

They have lost eight of those games and drawn 11 and would be out of the top four during that period, with Manchester City, Chelsea, West Ham and Arsenal all earning more points in the corresponding period. Solskjaer’s side have now conceded 21 goals in the league – the joint-third highest – and have a goal difference of -1, following five defeats in their opening 12 games.

At the full-time whistle, Solskjaer, who is yet to win a trophy since joining the club in December 2018, went over to the travelling United fans and held his hands up in an apologetic manner and offered a little wave as he walked off.

Midfielder Bruno Fernandes said the blame should be on the players and all of the coaching staff, not just Solskjaer. “The first half is the worst we’ve played and it’s hard for me to explain why we played the way we did and allowed them to get in our box from nothing,” said Solskjaer. “We were outfought.

“I am very hurt – when you play in the Premier League you have got to turn up against good players and good opposition like this. “The boys are in a terrible place in their heads now – we have let ourselves down and the fans down. It’s hard to stand here and explain that but that’s football and we have to take the flack for it.”

Speculation over Solskjaer’s future will now increase with the Reds having already been knocked out of the League Cup by West Ham, and they are yet to guarantee progress from their Champions League group with two games remaining.

“I’ve never said I feel safe – I will never say that I feel safe,” added Solskjaer.

“I’m the manger and I will take the flak and take the responsibility – the players are working as hard as they can. “The fans are really disappointed – I understand, we all understand. They’ve supported us through thick and thin, they’ve been with us through this rebuild.”

“He is one of their own, part of the family at that club but they cannot ignore now that he is part of the problem,” said Keown on BBC’s Final Score. “Change is inevitable. It is looking perilous for the manager. “That last Watford goal was about passion and desire. Where were the defenders? They were not strong enough.” Former Scotland defender Alan Hutton, who was on BBC Radio 5 Live, said United were “abysmal” and they were a “team full of stars and they’re not performing”.

Sun Nov 21 , 2021
Support Village Voice News With a Donation of Your Choice. (BBC SPORT) Liverpool ended Arsenal’s 10-game unbeaten run in all competitions with a devastatingly routine victory at Anfield. Sadio Mane grabbed the opener when he headed in Trent Alexander-Arnold’s free-kick in the first half. Diogo Jota took advantage of a Nuno Tavares mistake to roll into an empty net before […] 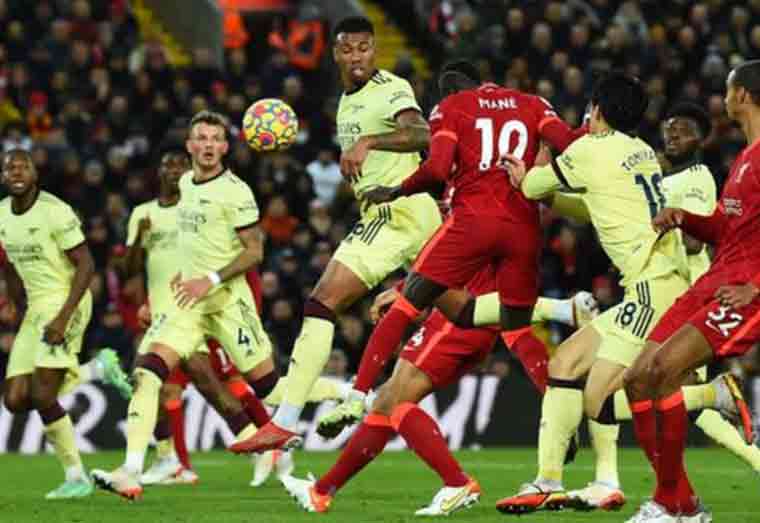