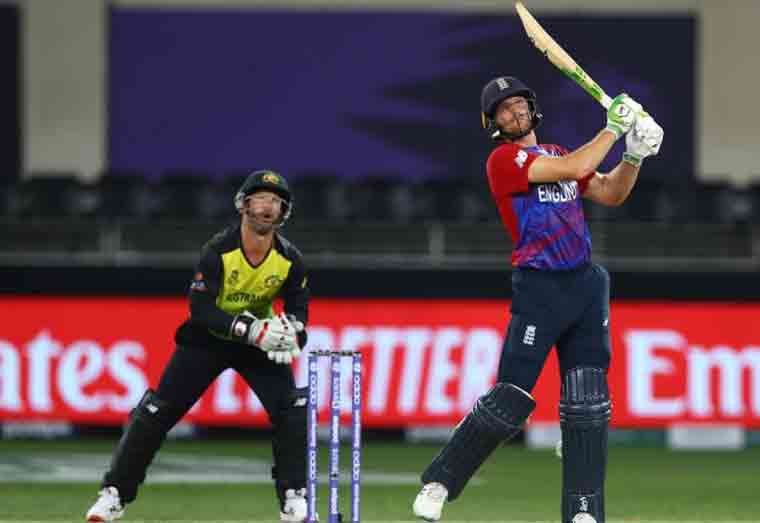 Eoin Morgan’s side chose to field and took four wickets in the powerplay for the second time in the tournament, reducing Australia to 21 for four with Chris Woakes the chief tormentor.

Due solely to 44 from skipper Aaron Finch, Australia set a target of 126 which England overhauled with ease, thanks to an incredible display of power and poise from Jos Buttler. Buttler clubbed a brutal 71 from 32 balls, with five fours and five sixes to lead England home with 8.2 overs remaining. Despite opting against using the off-spin of Moeen Ali up front as they did against the West Indies and Bangladesh, England sent Australia spiralling to nine for two.

David Warner couldn’t continue the form he showed against Sri Lanka, nicking the insistent seam of Chris Woakes to Buttler with the eighth ball of the game. With the first delivery of the second over, Chris Jordan got one to stop on Steven Smith outside off stump and he looped a catch to that man Woakes at mid-on.

The early carnage was a mirror of the ICC Men’s Cricket World Cup semi-finals in 2019, when a Woakes-inspired England reduced their rivals to 14 for three at Edgbaston. No batter strikes at a higher rate against a single opponent than Aaron Finch, who started the game having taken England for 550 runs at 175. The opener was given nothing to work with after he hit an overpitched Rashid delivery for four in the first over.

Finch and Matthew Wade embarked on a painstaking rebuild, faced with leg-spin from Rashid and Liam Livingstone which is far from the favourite fare of the Australian captain. The busy keeper-batter struck Australia’s second boundary of the innings in the 10th over, cutting Rashid for four, then flaying Tymal Mills to the third man fence. The fifth wicket stand was at 30 when Livingstone followed three quicker deliveries by giving one some air, forcing Wade to chip to Jason Roy at long-on, departing for 18 to make it 51 for five.

Finch remained amid the chaos and took a liking to Mills, hitting him for back-to-back boundaries and then throwing his hands at a wide one from Jordan for four through point. Woakes returned and conceded 20 runs in the 17th over, his last. Ashton Agar carted him for six over the leg side and then over long-on as the Australians rallied. But another clump of wickets fell in a frenetic spell. First, Agar pulled Mills to midwicket before Pat Cummins struck successive sixes.

Jordan then got the crucial wicket of Finch as Jonny Bairstow dived forward to take a brilliant catch at long-off, then Cummins was clean bowl by a yorker for 12. England made a blistering start to the chase with Buttler and Roy ruthlessly in picking up anything slightly short of a length. Roy made a trademark stride down the pitch and clubbed Cummins for a 92-metre six over wide long-on and as if to try to match him, Buttler sent an Agar delivery 91 metres over long-off.

A brutal display of hitting from Buttler had only just begun, nearly launching Mitchell Starc out of the Dubai International Stadium twice with towering sixes over long-on. Starc went for 18 in his first over and was the target again as Buttler drove him over mid-off and then smacked him over midwicket. Then the 31-year-old took aim at Zampa, whose leg-spin then disappeared down the arc and was reverse swept for four to make it 97-1 off the last ball of the ninth. Malan nicked Agar behind but it was one-way traffic late on, Bairstow smacking two sixes off Zampa before hitting the winning run to point, wrapping up a superb victory. England sit top of Group 1 with three wins from three, while Australia are third.

Sun Oct 31 , 2021
Support Village Voice News With a Donation of Your Choice. (AP) — Prime Minister Ariel Henry condemned gangs and kidnappings in a prerecorded address posted Friday in which he also reassured Haitians that the country was not running out of fuel despite severe shortages that have frustrated millions and sparked recent strikes. It’s the first time Henry has acknowledged those […]