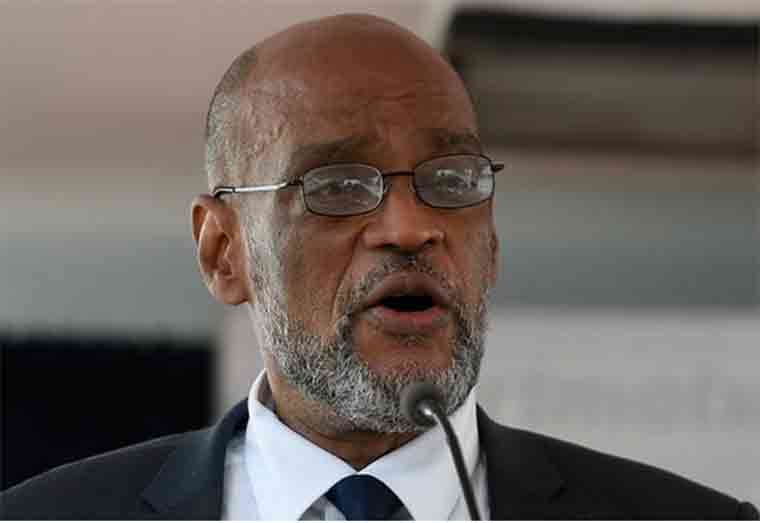 (AP) — Prime Minister Ariel Henry condemned gangs and kidnappings in a prerecorded address posted Friday in which he also reassured Haitians that the country was not running out of fuel despite severe shortages that have frustrated millions and sparked recent strikes.
It’s the first time Henry has acknowledged those issues in a public address since the October 16 kidnapping of 17 members of a US-based missionary group. The 16 Americans, one Canadian and their Haitian driver were abducted amid a spike in gang-related kidnappings that police are struggling to control.
“If they do not stop their wrongdoing, the law will apply to them,” Henry said in his message. “The only option for bandits and all their sponsors is imprisonment or death if they do not want to change professions.”
The leader of the 400 Mawozo gang that kidnapped the missionaries, including five children, has said he would kill them if his demands are not met. Haitian officials have said the gang is seeking $1 million per person, but that it wasn’t clear if that included the children, the youngest of whom is 8 months old.

Henry did not mention the abduction of the missionaries, but denounced kidnappings in general, saying, “All those who take the Haitian people hostage, terrorise the population, are the enemies of the people.”He also condemned those who are helping criminals by giving them weapons, ammunition and money, including “all those who deal with them so that they can take power. They are all enemies of the Haitian people, and we are treating them as enemies.”
Henry noted that he became prime minister roughly three months ago following the July 7 assassination of President Jovenel Moïse and found “a country torn, divided, with a state in tatters whose democratic institutions are dysfunctional.
“The nation lives under the thumb of bandits. Citizens cannot leave the capital to go to the south. The country’s economic situation is dire. Inflation and high cost of living keep their hold on national life. The budget deficit has reached an unprecedented level and the gourd (currency) continues to drop sharply against the US dollar.”

The prime minister spoke days after a widespread strike led to schools, businesses and public transportation to shut down in the capital of Port-au-Prince and beyond to protest the lack of fuel and the country’s worsening situation. Gangs have been blamed for blocking gas distribution terminals, with at least one gang leader saying he would lift the blockade if Henry stepped down.
Henry said ships are waiting to unload fuel and that the country, which shares the island of Hispaniola with the Dominican Republic, would not run out of gas. He added that he has created a crisis unit with top officials from finance, justice, police, public works, trade and other departments to find a “quick solution” to the fuel distribution problem.
He said the government has already placed additional fuel orders and said police have created a “security corridor” to the fuel supply center. He said the airports, Coast Guard boats and some hospitals and telephone companies have already received new fuel shipments and that police escorts are available for truck drivers who fear they will be kidnapped or killed.

He said he would not share further details to guarantee the operation’s success.
The shortages have affected hospitals, ambulances, schools, public transportation and many other parts of daily life.
“This is really catastrophic,” said Solon Cledion, director of a private school in Port-au-Prince, in a telephone interview. “The day-to-day is difficult. … We wonder how long this is going to last.”
Meanwhile, Doctors Without Borders said that its trauma hospital in Tabarre has been forced to limit patients and is only treating life-threatening emergencies. The aid group relies on generators due to ongoing power outages in Haiti.
“Without fuel, we can’t run our hospital,” Dr Kanouté Dialla, the hospital’s manager, said in a statement. “We are doing our best to maintain our activities by adapting them from day to day, but this situation is unsustainable.”

Henry acknowledged the dire situation, noting that patients with COVID-19 who depend on respirators are among those who are at risk of dying if fuel is not available. In his speech, he congratulated one man who he said drove through dangerous communities to transport fuel and oxygen to a hospital and saved the lives of 60 patients.
The prime minister also announced that the office of the judge overseeing the investigation of the president’s slaying had been attacked. He did not provide details but said authorities are searching for those responsible. The previous judge in the case stepped down for personal reasons a day after one of his assistants died under unclear circumstances.
Henry said he is aware of people’s anger and that his administration is addressing the country’s multiple problems.
“To all those who have legitimate demands, who have declared they are fed up with inflation, poverty and insecurity, I guarantee that their voice is heard by the government,” he said. “Gangs are our enemies. No real solution to the country’s problems will emerge if we do not arm ourselves with the courage to fight and eliminate this scourge.”

Sun Oct 31 , 2021
Support Village Voice News With a Donation of Your Choice. …after thrashing New Castle (BBC SPORT) Reece James scored twice to help Premier League leaders Chelsea beat Newcastle United at a packed St James’ Park. James blasted the ball into the roof of the net after Callum Hudson-Odoi’s cross was headed into his path to put the visitors ahead after […]