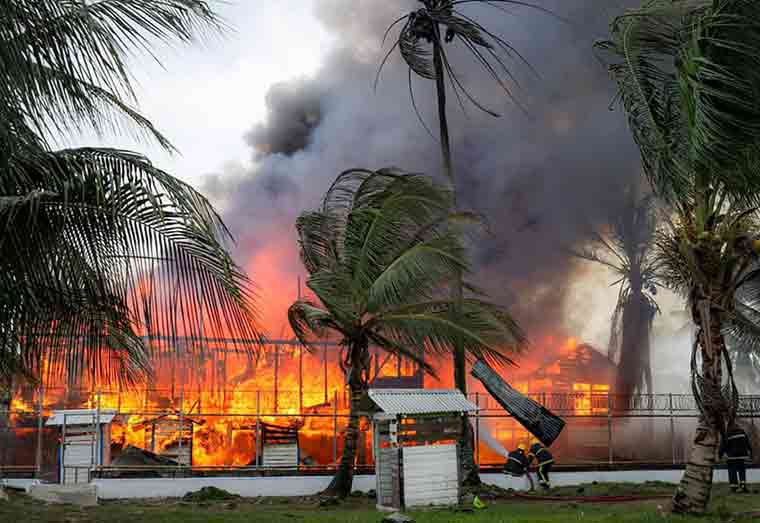 A fire of unknown origin on Saturday ravaged a section of a building at Police Headquarters Eve Leary that house its Office of Professional Responsibility, the chambers of the Director of Public Prosecutions and other services.

According to a Department of Public Information release, quick response from the Guyana Fire Service resulted in fire being brought under control.

Prime Minister (ret’d) Brigadier Mark Phillips, Minister of Home Affairs, Robeson Benn and Minister of Parliamentary Affairs and Governance, Gail Teixeira, along with several other Ministers of Government are currently on the ground.

Prime Minister Phillips, speaking with members of the media said “From the looks of things, the fire would not spread to the Office of the Director of Public Prosecutions,”. The DPP’s office is housed in the same building. Commissioner of Police, Nigel Hoppie, said all documents housed in the Office of the Director Public Prosecutions have been removed. The Commissioner also stated that systems are in place to handle the loss of documents in the section that housed the Office of Professional Responsibility. An investigation will be undertaken to determine the origin of the fire.

Saturday’s fire comes weeks after a similar fire also on Saturday completely destroyed the Brickdam Police Station. Police have charged a man who was an inmate at the time at the station lock-up for setting fire to the building. (Photos by Marceano Narine of DPI)

Sun Nov 21 , 2021
Support Village Voice News With a Donation of Your Choice. …unions, political parties hammer govt over 7% salary increase for public servants …GPSU says imposition unlawful, offensive; tells President Ali to get it right By Svetlana Marshall Government’s announcement that public servants will receive a 7% salary increase in December, after a two-year hiatus, has been rejected as unlawful and […]