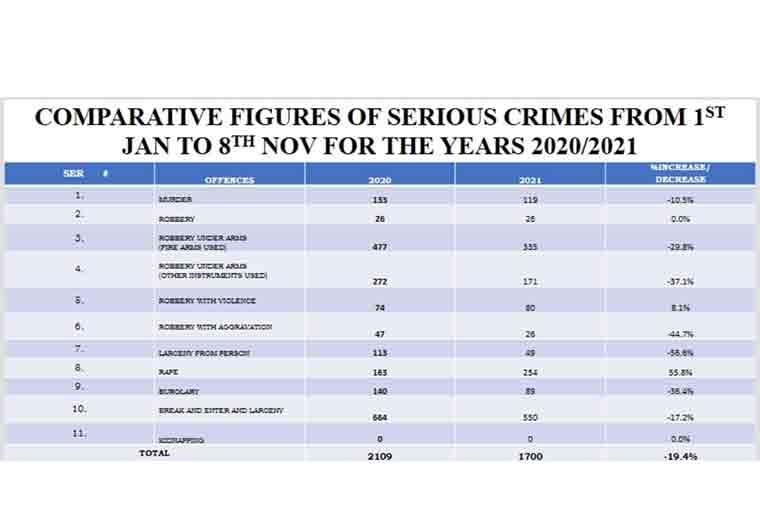 …. number of young people under 25 involved in murders, other crimes alarming –  Blanhum

Serious crimes have reduced by 19.4% in Guyana for 2021, however, the number of young persons under the age of 25 involved in murders and other offences is alarming, Deputy Commissioner of Police, Law Enforcement (ag) Wendell Blanhum said.

While presenting an overview of criminal activities in Guyana for the period January 1 to November 8, 2021, during a virtual press briefing on Monday, the Deputy Commissioner detailed that murders dropped by 10.5% in 2021 with 119 murders recorded this year compared to 133 murders during the same period last year.

Robbery with aggravation also decreased by 44.7%, as well as larceny with a 56.8% reduction. Burglary and break and enter and larceny also decreased this year, however, the number of rape cases continue to increase.

According to the Deputy Commissioner, 254 rape cases were recorded in 2021 compared to 163 in 2020, representing an increase of 55.8%. There was no kidnapping recorded this year or last year.

While there has been a reduction in serious crimes, Blanhum told the press that the number of young people under the age of 25 charged with murder and other serious offences for 2021 is a serious cause for concern.

“Many of the young people today, they are being influenced by social media and hardened criminals to live a life of crime,” he said.

As such, he called for a multifaceted approached to be taken to resolve the issues facing the young Guyanese population, and more so at risked youth. Blanhum said the Guyana Police Force cannot do it alone.

Also, the Guyana Police Force this year attended to 26 reports of Trafficking in Person compared to 39 in 2020.

In the area of illicit substances, the Force seized 1,692kg of cocaine and 34g of cannabis at the Eugene F Correira International Airport. A total of 112 fields of cannabis, totaling 93.5 acres were eradicated. It was noted eradication efforts will continue in Regions Six and 10.

It was noted by the Deputy Commissioner that drug traffickers, in part, continue to use aircraft and illicit airstrips to traffic illicit substances, however, a number of them have been intercepted, arrested and prosecuted. Notably, the highest cocaine seizure for 2021 totaled 536.3kg of cocaine.

The reduction in criminal activities, Blanhum said, was as a result of a number of crime fighting strategies employed by the Force.

“The Guyana Police Force now has full command and control of the CCTV Centre. We continue to staff that centre to full capacity and we are working a 24 hours shift system, and real time information from that centre is being fed to our commanders and patrol officers,” he detailed.

Using the CCTVs, the police have also been able to secure images of persons committing serious crimes. According to the Deputy Commissioner, those images are also being used in court proceedings.

It was noted too that the Force continues to adopt a robust intelligence gathering, which has resulting in a number of successful intelligent led operations and sting operations. Road blocks, choke points controls, anti-crime patrols and community-policing are among the other strategies employed by the Force.

These have resulted in the extraditions of Jankie Tapsie Samantha Khan from Suriname, who was wanted for murder; and Ganeshwar Seocharran from USA, another murder accused.

But Blanhum said the work of the police is not with challenges. He complained that a number of repeated offenders continue to receive bail. Additionally, he said some of the CCTV images from crime scenes are of poor quality, and there is an inadequate number of investigators in the 10 Districts. It was noted too that some cases have been dismissed due to the absence of police witnesses while a few ranks have been found to be in collusion with criminals.

Going forward, the Force will continue to use real-time information to catch criminals; expand operational and investigative capacity in all regions; maintain a robust presence at choke points, check points and borders, increase presence at CJIA AND Ogle airports and facilitate day and night patrols around Georgetown.

Tue Nov 16 , 2021
Support Village Voice News With a Donation of Your Choice. Officials of Region Three have reported that over the weekend two winches on separate sluices on the West Bank Demerara were stolen by unknown persons. According to a Ministry of Agriculture report on Saturday, November 13, 2021 sometime in the evening, the winch that is used to open and close […]