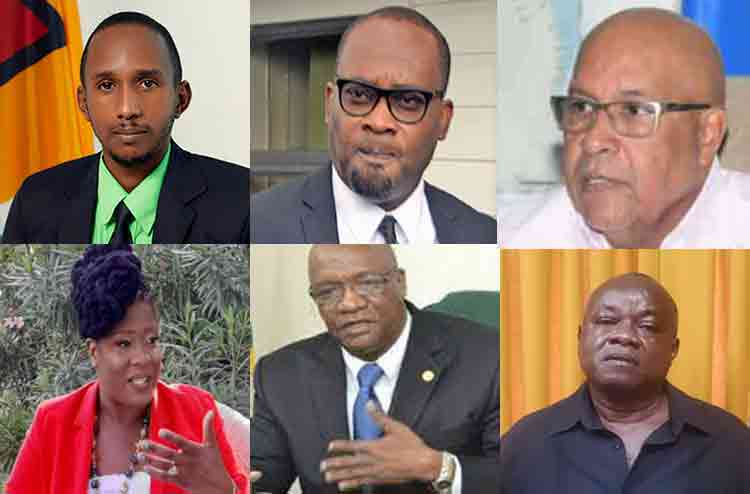 Political Scientist, Aubrey Norton, at the close of Nomination Day on Friday secured the majority of the nominations for Leader of the People’s National Congress Reform (PNCR) with Opposition Leader, Joseph Harmon following sharply behind, followed by Dr. Richard Van West-Charles.

When contacted on Saturday, Co-Chairman of the PNCR Accreditation Committee, Mortimer Mingo told the Village Voice Newspaper that the PNCR will issue a press statement on the nominations received once it has been briefed by the accreditation committee, and as such, he was unable to provide details.

However, a source close to the PNCR Accreditation Committee, told the Village Voice Newspaper that Norton, who has been described by many as a political genius, a grassroots politician and a man with a vision, secured approximately 50% of the nominations submitted from across the country, followed by Harmon with approximately 40%, and Van West-Charles with an estimated 10%.

According to the source, Norton secured the majority of the nominations in Region Four (Demerara-Mahaica), Region Five (Mahaica-Berbice), and Region 10 (Upper Demerara-Upper Berbice).

Village Voice News understands that the incumbent Chairman of the PNCR, Volda Lawrence also received nominations to be the next Leader of the PNCR as well as Basil Williams, another party stalwart, who served most recently as Attorney General and Minister of Legal Affairs under the David Granger Administration.

When the Biennial Congress is held on December 11, the nominee with the most votes will be elected Leader of the PNCR, thereby replacing incumbent Leader, David Granger.

During an interview with reporters on Nomination Day (Friday, November 12) at Congress Place, Harmon expressed confidence that his team, which includes A Partnership for National Unity + Alliance For Change (APNU+AFC) Members of Parliament, Roysdale Forde, Ganesh Mahipaul, Annette Ferguson, and Natasha Singh-Lewis among others, will emerge victorious at the end of the Polling Day.

He said once the elections end, the party must focus on uniting its members and expanding its base to “fight” the People’s Progressive Party/Civic (PPP/C) Government that has been “wreaking havoc” on the people of Guyana. “We believe that a strong unified Peoples National Congress is critical to a strong APNU+AFC Coalition, and that is critical to getting us back into Office, and I believe that it is our ultimate objective to get back into Office,” Harmon told reporters.

Harmon, who serves as the country’s Opposition Leader, said should he be elected Leader of the PNCR, he will roll out a 10-point plan centered around unity and inclusiveness, women and youth empowerment and financial management.

And while the other nominees have put forward similar plans and visions, Harmon told reporters, that over the years, that it was he who worked tirelessly along with a team to broaden the coalition’s support base.

However, Harmon said win or lose, he will continue to work in the interest of the party and the people of Guyana.

In a separate interview with the press at Congress Place on Friday, Norton said supporters on the ground have reposed confidence in him to lead the PNCR.

“I think I have a good grasp of the international situation, the national situation,” he said, noting that supporters are looking to him to reenergise and strategically position the party to win the next General Election while bringing an end to the injustices being felt by the people of Guyana.

Norton also rejected allegations that he has a pro-Afro-Guyanese agenda, saying that it is furthest from the truth. He recalled that it was he who had supported Winston Murray, an Indo-Guyanese, for the Leadership of the PNCR, when many did not.

“The fact that I was prepared to put a competent Indian to lead the party base on his abilities rather than his ethnicity suggest that I am not anti-Indian. Now, representing of an African cause does not make you anti-Indian but I also represent Indo-Guyanese cause,” he reasoned.

Norton said should he be elected Leader of the PNCR, he will ensure the next time General Elections are it would be done with a fresh voters’ list.

Nominations were also submitted for the Offices of the Vice Chairs, Treasurer and Executive Members. One day ahead of Nomination Day, Mahipaul, who is Harmon’s pick for General Secretary, cautioned that nominations received do not determine who will win or lose.

“I remember when I ran for the CEC seat in my region. I received 2 nominations while my contender received 21 nominations but you know what? At the elections, I won the seat with 97 delegates voting for me. My opponent got 62 votes. I say that to say, nominations don’t win elections,” Mahipaul said. He said the race is not for the swift but for those that can endure it to the end.

Sun Nov 14 , 2021
Support Village Voice News With a Donation of Your Choice. – Gaskin says failure to audit Exxon’s US$9.5B expenditure a serious dereliction on the part of gov’t By Svetlana Marshall Transparency Advocate and Economist, Ramon Gaskin said the Government’s failure to audit Exxon Mobil’s expenses totaling US$9.5 billion or G$1.8 trillion is a serious dereliction of duty, even as he […]