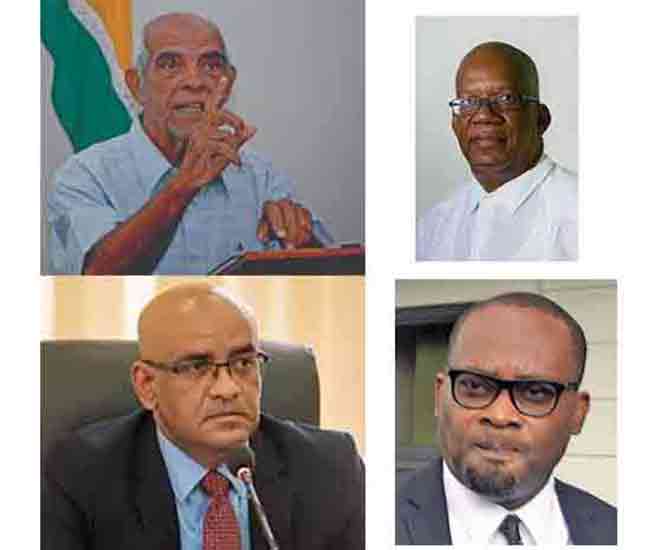 – Gaskin says failure to audit Exxon’s US$9.5B expenditure a serious dereliction on the part of gov’t
By Svetlana Marshall

Transparency Advocate and Economist, Ramon Gaskin said the Government’s failure to audit Exxon Mobil’s expenses totaling US$9.5 billion or G$1.8 trillion is a serious dereliction of duty, even as he rubbished the excuse proffered by Vice President, Bharrat Jagdeo that it was as a result of a lack of “strong local content.”

At his recent press conference, the Vice President said the Government was unable to conduct critical audits of the expenditure incurred by US oil-giant ExxonMobil during its development of the Stabroek Block’s Liza Phase One and Two Projects due to the lack of “strong local content.” But Gaskin, in an interview with Village Voice News, said the Government neglected its duty and it was not as a result of the lack of experienced and competent local auditors as contended by the Vice President.

“I consider it a grave dereliction of duty on the part of the Government, and particularly the Vice President, Mr. Bharrat Jagdeo, to allow this to happen,” the Economist told this newspaper.

It was explained that due to Government’s failure to audit the costs, expenses, accounts and records of ExxonMobil and its partners, CNOOC and Hess Corporation within the specified two-year deadline, the costs, which are to be borne by Government, must be accepted as correct as stipulated by the Production Sharing Agreement (PSA).

Gaskin said contrary to the excuse proffered by Jagdeo, Guyana has a number of audit firms with chartered accountants, who are more than capable of auditing the expenses of Exxon. Additionally, he pointed out that under the Constitution of Guyana, the Auditor General is responsible for auditing the finances of the country.

However, he said from all indication, the People’s Progressive Party/Civic (PPP/C) Administration is not interested in conducting audits. To support his claims, Gaskin referenced to the more than US$200M received under the Guyana-Norway Agreement between 2009 and 2015.

The disclosure did not sit well with A Partnership for National Unity + Alliance For Change (APNU+AFC) Member of Parliament, Roysdale Forde. “Local auditors must feel like peons knowing what Jagdeo and the installed PPP/C administration think of them. It is stunning to see that it was better for him, who has no auditing skills, to let such a potentially large sum of money be forfeited with the added loss of an opportunity for local auditors to learn on the job,” MP Forde said.

He too said that the excuse advanced by Jagdeo for such a massive financial failure reflects a dereliction of duty by the PPP/C Administration. The APNU+AFC MP submitted that it was reckless on the part of the Government to let potentially G$1.8 trillion go down the drain at a time when there is a continue rise in cost of living.

DISINGENUOUS
Weighing in on the issue, fprmer Finance Minister, Winston Jordan, who served under the APNU+AFC Government (2015-2020), said that the excuse given by the country’s Vice President is simply “disingenuous,” and has left Guyanese “flummoxed.”

Jordan told the Village Voice Newspaper that the costs incurred by Exxon and its partners could have been audited by a local audit firm in conjunction with an international auditing firm.

Further, he recalled that in the first quarter of 2019, Guyana secured a US$20M loan from the World Bank to foster capacity building in the area of Petroleum Resource Management in the Oil and Gas Sector.

He said the loan, in part, caters for the hiring of experts, and the Government could have hired an international auditing firm to scrutinise the bills submitted by the oil companies.

Hypothetically, Jordan said had the Government hired a firm at the cost of US$5M, and the sum of US$100M was identified as excess, it could have raked in a net of more than US$90M.

“So your net savings even at that extremely low level would have been US$90M, and you would have come out ahead, there is no excuse, none whatsoever, and the excuse that you didn’t have local content is very disingenuous,” he said.

Jordan said due to Government’s failure to facilitate the audit, the country is therefore unable to challenge costs submitted by ExxonMobil.

“We lost the opportunity to build capacity while doing the audit. If you had people who were undertaking that audit, there would have been a number of issues that would have arisen, one of which is the way Exxon continues to present those expenditures. They claim that they are presenting the expenditure according to some accounting software that they are using, but we would like the expenditure presented in a granular manner,” he said while noting that experience and capacity would have been developed ahead of other major projects.

Offering his advice, the former Finance Minister said that the Oil and Gas Sector is too big of a sector not to have a national approach, as he underscored the need for collective approach to be taken.

Noting that the Oil and Gas is still new to Guyana, Jordan said the country does not have “people of quality, of substance, of experience in the sector” to provide the necessary advice and guidance, and as such the country is heavily dependent on ExxonMobil.

“So we have to move with haste, we have significant sums in the Natural Resource Fund, and we have that US$20M, some of which is left, to rapidly build capacity even as we train our local talent to bring them up to speed,” he said.

Explaining that it may take four to five years to bring “local talent up to speed,” Jordan said Guyana will have to hire overseas-based Guyanese, who are experienced in the Oil and Gas Sector.

“Right now we are depending on everything Exxon tells us,” he said while adding that “we are only fooling ourselves.”

Sun Nov 14 , 2021
Support Village Voice News With a Donation of Your Choice. …Jonas, Ramjattan say proposed changes to elections laws undesirable, oppressive “You’re going to have a crisis on your hands, because quite frankly you don’t want to pull ill-educated people there, you want people who understand English language and who can do the thing,” AFC leader Khemraj Ramjattan said. Chairman of […]