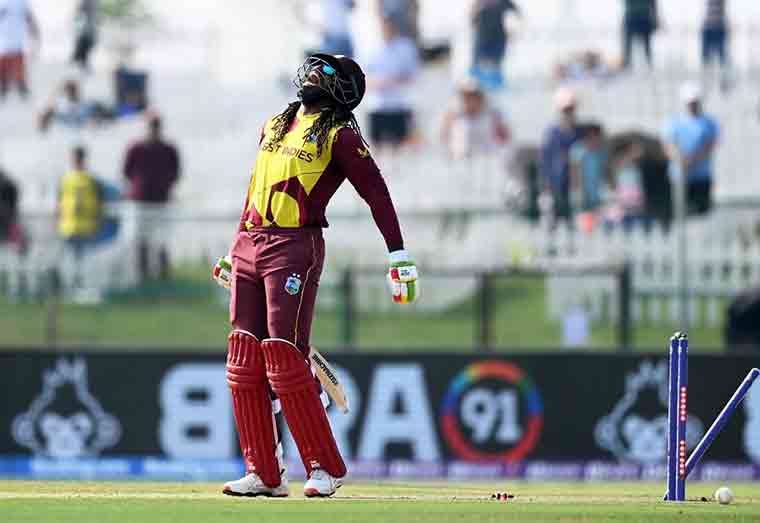 (CRICINFO) As the sun set on the T20 empire of West Indies, a team full of T20 greats, one all-time great in the opposition, David Warner, played a memorable knock to make a potentially tricky target look easy. That eventually proved to be enough to put Australia in the semi-finals, with South Africa not doing enough against England later in the night.* West Indies, already eliminated from the tournament, will now be asked to play the first round of the next World Cup to reach the Super 12s stage; only the top-eight teams in the rankings on November 15 will get automatic entry into the Super 12s, and West Indies and Sri Lanka don’t make it.

It was a wistful day with Dwayne Bravo definitely and Chris Gayle possibly playing their last match for West Indies. It was also a reminder of passing time that Australia’s bowlers kept getting the better of them. Josh Hazlewood led with three wickets with almost Test-match-like bowling. It took hard work from Kieron Pollard and Andre Russell to take West Indies to 157.

Warner responded with his highest World Cup score, 89* off 56 balls, while Mitchell Marsh lent an impressive hand with the bat to go with his tight bowling, scoring his first World Cup half-century. That they finished it off in the 17th over took their net run rate up to 1.216, leaving South Africa needing a 61-run win should they score 160 to deny Australia the semi-final spot.

West Indies with nothing to lose can be a scary proposition. Evin Lewis and Gayle gave them a taste of it, taking 19 runs in Hazlewood’s first over. A trademark six over long-on, never mind a short-of-a-length slower ball, off Pat Cummins followed, but Gayle ended up playing on the next ball. Out for 15 off 9 deliveries, he raised his bat as he walked off and was hugged by team-mates just across the rope.

In the next over, Hazlewood made a comeback as he bashed a good length, drawing a slice to cover from Nicholas Pooran, and then dislodging the top of off, going past Roston Chase’s defence. Three wickets lost for five runs, and West Indies were now forced to rebuild at 35 for 3 in the fourth over.

Middle-overs choke
With two left-hand batters in the middle, Glenn Maxwell got an over in before Marsh and Adam Zampa applied the choke hold. Marsh gave nothing away in terms of pace or room, while Zampa continued with his quick legbreaks and variations. With the fourth-wicket partnership reading 35 off 35 and time running out, Lewis had to take his risks, and the Zampa wrong ‘un was ready to collect the wicket in the tenth over.

Hazlewood then came back in the 13th to bowl a mean bouncer at Shimron Hetmyer’s armpit, who just couldn’t get out of the day, making it 91 for 5.

Pollard, Russell fight
Australia were spot on with their plans and execution against the West Indies batters, giving nothing away to Bravo, but Pollard and Russell showed flashes of what made them T20 greats. Pollard ended with 44 off 31, and Russell finished the innings with successive sixes, his first of the tournament, which gave them 48 off the last four overs, and some hope.

Hosein stifles openers
That hope looked like it might amount to something, as Akeal Hosein tied Australia up with his arm balls, getting Aaron Finch out bowled in his second over. His figures at the end of his two overs read 2-0-7-1.

Warner attacks at the other end
At the other end, though, Warner kept attacking, hitting Chase and Jason Holder in the powerplay. When he finally managed to get the better of Hosein in the sixth over, Australia were well on their way at 53 for 1 in eight overs. Warner has had an underwhelming few months, with his IPL team moving on from him and a slow start for him at the World Cup. However, at the business end of the tournament, he finally seems to have found the timing back. He picked the balls to attack perfectly, and executed them just as well.

Marsh supports
Once the powerplay ended, Australia needed runs to flow from each end, and Marsh did it for them. He began with a reverse-sweep off Hayden Walsh Jr, who had had a great series against Australia a few months back, and then added a six down the ground off Hosein. Once Marsh took six, four and four off Russell in the tenth over, Australia needed just a run a ball.

A jovial end
The last two complete overs of the match went to Bravo and Gayle. Warner switch-hit Bravo for four before pulling him for six. Gayle then bowled with his hat and sunglasses on, indulging in banter with Warner. With possibly his last ball in international cricket, Gayle had Marsh caught at mid-off. He followed the returning Marsh and jumped on him for a hug from behind to celebrate the wicket. There were smiles and grins all around to mark much-celebrated careers.

NIS should pay without further delay

Sun Nov 7 , 2021
Support Village Voice News With a Donation of Your Choice. Dear Editor   This is my second letter on the issue of the denial of earned pension by NIS to my fellow villager Ingrid Arthur – A6219976. Since then, a formal request has been made to the NIS for a review of the tabulation of the contributions of this lady but […]