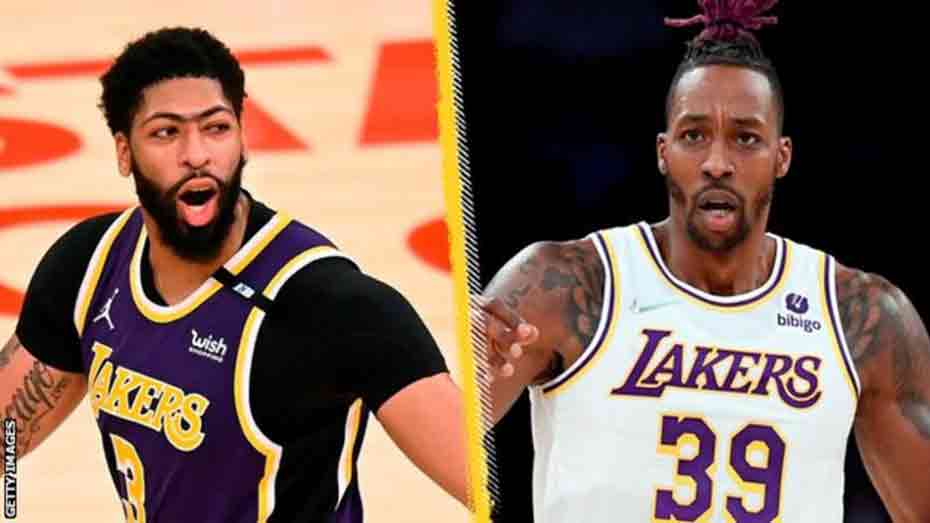 Davis and Howard squared up to each other on the bench during a timeout and had to be separated by team-mates in the first half.

“We squashed it right then and there,” said Howard about the altercation. “We’re both passionate about winning and didn’t want to lose. But we’re grown men, we got it out the way.” He added: “There’s no issue between me and him – that’s my brother, my team-mate.”

The defeat for the Lakers means they have lost both their opening games of the new NBA season. “Dwight and AD had a miscue on a coverage and they talked it out,” said Lakers coach Frank Vogel.

“When you’re getting your ass kicked, sometimes those conversations get heated. “Those guys love each other, they talked it out. And that’s going to happen from time to time – I’d rather our guys care than not care.”

Another incident in the game involved Lakers guard Rajon Rondo having a run-in with a fan during the third quarter. Rondo pointed at a man after a soft drink was thrown or spilled on the sidelines and, after the fan slapped Rondo’s hand away, the supporter was escorted away by security guards. Chris Paul had starred for the Suns with 23 points and a game-high 14 assists in their victory, becoming the first player in NBA history to register 20,000 points and 10,000 assists.

Elsewhere, Kevin Durant scored a 29-point triple-double for the Brooklyn Nets as they turned around a 10-point deficit late on to beat the Philadelphia 76ers 114-109. The Nets came back from 108-98 down with only five minutes remaining in the fourth quarter and Durant finished with 15 rebounds and 12 assists along with his 29-points.

Sun Oct 24 , 2021
Support Village Voice News With a Donation of Your Choice. (BBC NEWS) The world’s biggest oil exporter, Saudi Arabia, has pledged to cut its carbon emissions to net zero by 2060. Crown Prince Mohammed bin Salman said the Gulf state would invest more than $180bn (£130bn) to reach the goal. But he said the kingdom would continue to produce oil […]