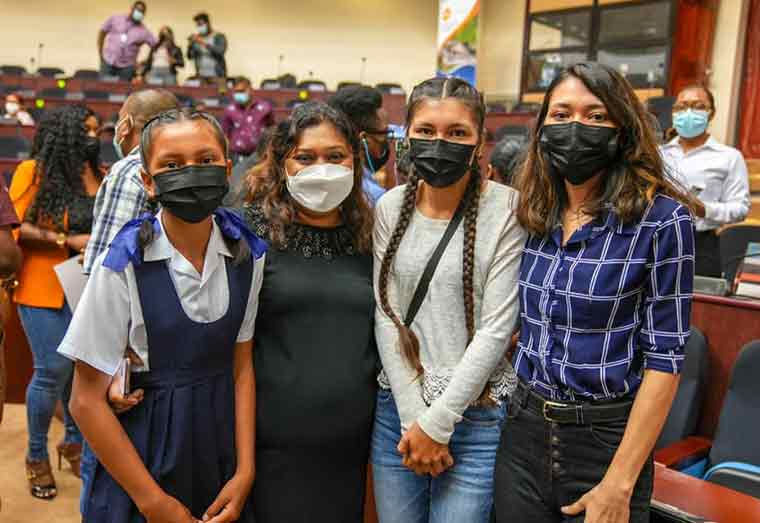 Just looking at 11-year-old Aisha DeFreitas who topped Region Nine at the 2021 National Grade Six Assesment (NGSA) Examination, one would be unable to tell just how much the odds were stacked against her and the sacrifice it took for her to make the achievement.

At the exam which offered a maximum of 527 possible marks, Aisha secured 517, putting her on par with students on Guyana’s coastland who had unlimited access to educational resources while she had the opposite.

Aisha is from Rupunau, a village in South Central Rupununi, Region Nine, with a last reported population of just over 300. The primary indigenous group there is the Wapichan and their main livelihood is farming.

When the COVID-19 pandemic hit Guyana and schools were closed for safety, Aisha was left with very unreliable access to Wi-Fi or electricity while thousands of students on Guyana’s coastland and elsewhere transitioned to online learning.

What changed what could have been a dire situation for her academic trajectory was the involvement of her sisters, 25-year-old Samantha DeFreitas and 22-year-old Maya DeFreitas.

When Aisha felt overwhelmed with the swirling of excitement and activities around her on Friday for the announcement of the NGSA results, her sisters stood by her side to tell of her journey which was no easy feat.

I HAD TO DO SOMETHING

To begin with, they explained that Rupunau does not have the same access to trained teachers or resources as schools on the coastland so, when the COVID-19 pandemic hit, it was a double blow.

“The Government gave out solar panels but there are always problems with the batteries or inverter. Even now, the internet only comes on at a certain time and only if there’s sun,” Maya said. Samantha added: “Only recently, they gave internet to the Village but
you can barely send a WhatsApp message. It would take forever to go.”

Samantha has worked as a teacher and Maya, who lives in Georgetown, just completed her Associate’s Degree in Biology at the University of Guyana (UG).

However, when they were Aisha’s age, no one helped clear the path for them to have better access to education. It simply was not the priority.

“My parents didn’t push me. They didn’t give me many opportunities to reach my full potential and I didn’t want that for her [Aisha],” Samantha said.

Desirous that Aisha had better academic opportunities than she and Maya did, Samantha knew she had to do something. She put her studies on pause and took on the responsibility.

Along with her partner Neal Millar, they moved to Lethem with little to no money and took Aisha with them from Rupunau so that she could attend the Arapaima Primary which had better access to Wi-Fi and electricity.

Samantha and Neal would study daily with Aisha and Neal would often prepare mock papers by himself to help test her. Maya also visited Lethem when she could to assist her sister and Neal. Relatives in Lethem also helped out in whatever way they could.

I WANT TO MAKE A DIFFERENCE
While at the Conference Center, Aisha was overwhelmed, but grateful for her sister’s presence for support. Samantha explained that her little sister wasn’t accustomed to the city and its large population. Going there often felt like going to another country.

“She’s very shy, very quiet, timid and gentle. She’s too soft to actually push for what she wants by herself, but if there’s somebody supporting her or behind her who she knows she can fall back on, she excels,” Samantha explained.

Prior to being called away for photographs, Aisha gave the Village Voice News a sneak peek of what was going on in her mind and how she prepared for the exam.

“The workload that I had was too much for me so I had to take breaks and then do it over again,” she said. “I would encourage myself because I want a better life for myself and a better future with more options that I can choose.”

Aisha also wants to become a Zoologist because of her love for animals. She said that she was inspired by the beauty of the anteater. “I studied an anteater and how big it was and how nice it was; the color of it, the long fangs, how baby holds on to its mother
and how they walk around,” she described.

EVERYONE’S INVOLVEMENT
Maya and Samantha told the Village Voice News that helping their sister and other children in Rupunau means more to them than many know. They said that they see education as the gateway to a better life for youths who would otherwise be subjected to lifelong disadvantages
not of their own doing.

Maya said that this is exactly what Samantha has done in the past. She revealed that though Samantha had other opportunities, there were occasions when chose to return to Rupunau Primary to teach to assist the children there.

The two sisters previously threw their support behind their younger brother and another younger sister, Anika, who were able to gain NGSA passes.

Samantha helped teach at Rupunau Primary and her younger brother was among the 13 that received scholarships. It was also the year that the village experienced its best NGSA performance ever with passes for the majority of the pupils.

When their other younger sister, Anika, wrote the NGSA in 2020 with their help, she placed second in the Region with 507 out of 528 marks.

Asked what she’d recommend to authorities as needed in Rupunau for youths there to be permitted better opportunities to excel, Samantha said that it requires all hands on deck.

“The Government can only do so much. You can give electricity, you can give Wi-Fi, you can give cell service, water, you can provide trained teachers, everything you can give it, but I think the other half of that is the parents. It’s the parents’ motivation for
their children to want to reach their full potential,” she said.

Aisha will now be heading to the country’s top secondary school, Queen’s College. The sisters expressed that there are no words to properly describe how happy they are for her and they look forward to her continuing to reach for the best possible future for herself.

‘They wanted to embarrass me’

Sun Oct 17 , 2021
Support Village Voice News With a Donation of Your Choice. – Paul Slowe says action will be taken against ranks who assaulted him at Magistrates’ Court —cites political motive for ‘harassment’ Former Chairman of the Police Service Commission and Assistant Police Commissioner (Ret’d), Paul Slowe said the attempt by ranks of the Special Organised Crime Unit (SOCU) to arrest him […]