In 2016, when former President David Granger appeared set to rename anything, he set his sights upon and controversy broke out over his renaming of the Ogle International Airport, I drew attention to the subjectivism inherent in this kind of process, particularly in divided countries, and suggested the establishment of a broad-based committee to objectively consider proposals for naming/renaming public facilities and make recommendations to the government. I also drew attention to the 1967 resolution of the United Nations Conference on the Standardization of Geographical Names, which called upon all countries to organise national names authorities.

I though then that the existence of a national naming arrangement could be a forum in which the pros and cons of proposals can be objectively discussed and the proposers, opposition and others provided with some wiggle room particularly on controversial issues. This has become particularly important today when the morality of past actions is largely judged through present-day lenses. For example, arguing that slavery was legal and had substantial acceptability has not absolved its supporters from past wrong doings. What is legal and acceptable is still rooted in class and power relations but there was always the alternative view that slavery was unjust and it was the ascendancy of the progressive standpoint that contributed to its demise and has now withdrawn all legitimacy from the historical transgressors of human freedom and dignity. As a result, monuments have been tumbling everywhere and it does appear that this longitudinal moral stance is an important social contribution of our times.

Recently, at the 152nd birth anniversary celebrations of Mahatma Gandhi observed at his statue in the Promenade Gardens, controversy again arose over a suggestion by the Indian High Commissioner to Guyana that the government should consider renaming both the Promenade Gardens and Middle Street in honour of Gandhi. The area he identified is of special significance to the African Guyanese community: some 200 slaves who took part in the 1823 rebellion were beheaded there.

My most charitable interpretation of the High Commissioner’s suggestion is that he did not properly consider the ethnic nature of Guyana and the national and international context as it relates to his suggestion. He should have recognised that Guyana is a multi-ethnic society in which about one half of the population is of African ethnicity and when their obvious national interest is coupled to concerns being expressed about Gandhi’s supposed ‘racism’ in the African world controversy was bound to erupt. Racism anywhere and now at any time is racism everywhere!

In December 2018, Aljazeera carried an article ‘Statue of ‘racist’ Gandhi removed from Ghana university campus.’ It reported that the statue was removed from Ghana’s most prestigious university by students and faculty who cited written passages by Gandhi depicting Indians as ‘infinitely superior’ to black Africans and using the racist pejorative ‘kaffirs’ to describe them. From Gandhi we heard that ‘Ours is one continual struggle against a degradation sought to be inflicted upon us by the Europeans, who desire to degrade us to the level of the raw Kaffir whose occupation is hunting, and whose sole ambition is to collect a certain number of cattle to buy a wife with and, then, pass his life in indolence and nakedness.’

In a December 2018 article, Dr. Obadele Kambon argued that the Indian political historian Ramachandra Guha was wrong when he stated that ‘By the time he was in his mid-30s, Gandhi no longer spoke of Africans as inferior to Indians.’ He contended that Gandhi’s autobiography conned the reader into believing that he had ‘a life-changing epiphany and transformation in 1906’ and he provided substantial textual evidence, some of which is mentioned below, to substantiate his case.

July 3, 1907 ‘Kaffirs are as a rule uncivilized – the convicts even more so. They are troublesome, very dirty and live almost like animals;’ 11 February, 1908, ‘Many of the Native prisoners are only one degree removed from the animal and often created rows and fought among themselves in their cells;’ 8 October, 1909 ‘We do not get there the food that we are used to, and are classified with the Kaffirs;’ December, 1910 ‘Some Indians do have contacts with Kaffir women. I think such contacts are fraught with grave danger. Indians would do well to avoid them altogether.’ 10 March, 1911 – about two year before Gandhi left South Africa for India – ‘If the Regulations provide for Kaffir Police, we can fight the Regulations.’ According the Kambon, in India Gandhi ‘turned his attention to robbing the Dalits – the Black untouchables of India – of the double-vote and special electorates.‘ His subsequent disagreements in India with Babasaheb Ambedkar – the British India’s Minister of Labour – on the demand for the rights of the Dalits are a continuation of his earlier anti-Black racist life.’

Where political leaders can do as they feel, i.e. in an autocracy, it does not matter, but in a democratic society a national naming arrangement could have been very useful to verify the evidence: if one likes, compare the record of Gandhi with the likes of Martin Luther King and Nelson Mandela and make recommendations. In the interest of international co-operation and friendship, it would also have afforded the government, opposition and maybe the entire political establishment the kind of policy space decisions of this nature require.

Sun Oct 10 , 2021
Support Village Voice News With a Donation of Your Choice. President Irfaan Ali has emphasised that protecting the Amazon’s rainforest is vital to the future of the planet and reaffirmed Guyana’s commitment to the Leticia Pact and its goals and objectives. The President made the statements virtually at the third annual summit on Friday from his Office on Shiv Chanderpaul […] 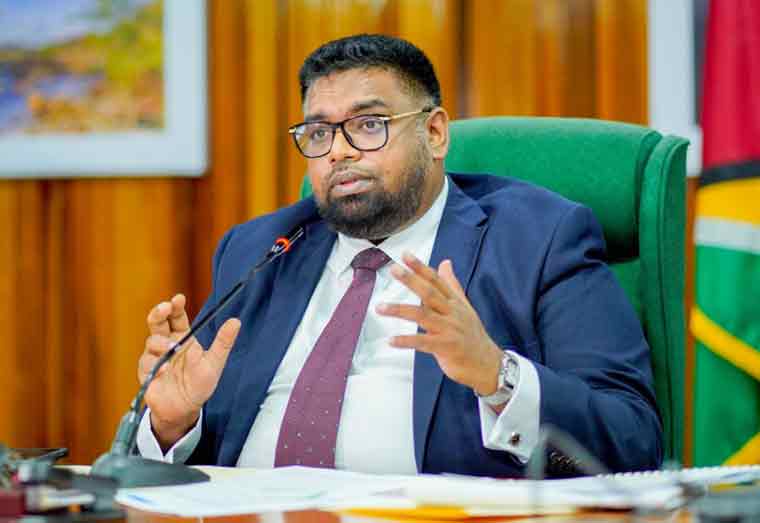