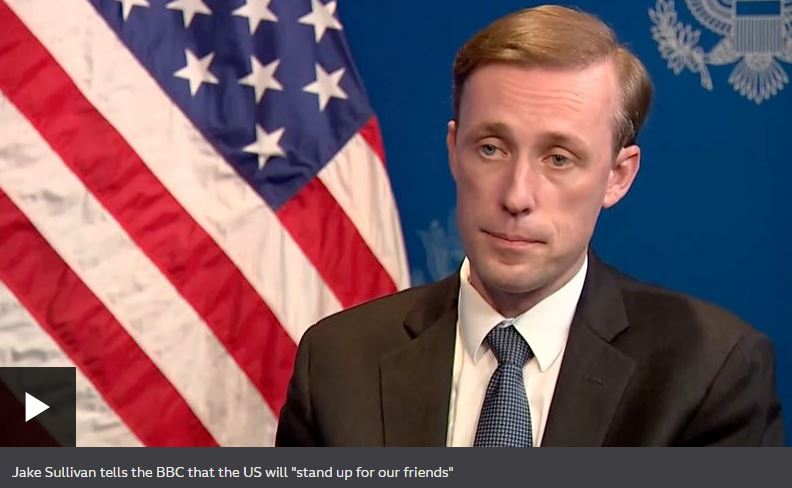 The US is “deeply concerned” about actions that undermine peace across the Taiwan Strait, US national security adviser Jake Sullivan has told the BBC.

His comments come after China sent a “record number” of military jets into Taiwan’s air defence zone for four days in a row, in a public show of force.

Taiwan considers itself a sovereign state – but China views the island as a breakaway province.

Beijing has not ruled out the possible use of force to achieve unification.

“We are going to stand up and speak out, both privately and publicly when we see the kinds of activities that are fundamentally destabilising,” Mr Sullivan told the BBC’s diplomatic correspondent James Landale in Brussels on Thursday, a day after meeting China’s top diplomat Yang Jiechi.

Asked whether the US was prepared to take military action to defend Taiwan, Mr Sullivan said: “Let me just say this, we are going to take action now to try to prevent that day from ever coming to pass.”

What is the ‘One China’ policy?
What’s behind the China-Taiwan divide?
US approves $1.8bn weapons sale to Taiwan
Pressed on whether the US was reluctant to use force in the wake of its recent withdrawal from Afghanistan, Mr Sullivan said it was “an enormous mistake to try to draw lessons” from that conflict.

“Trying to say that coming out of Afghanistan somehow tells any country anything about the depth and level of commitment the US has elsewhere is a grave mistake.”

Mr Sullivan said China was “going to steadfastly defend its perspective on the world”.

Taiwan broke away from the mainland as communists seized power in 1949.

Analysts have warned that Beijing is becoming increasingly concerned that Taiwan’s government is moving the island towards a formal declaration of independence and wants to deter its President Tsai Ing-wen from taking any steps in that direction.

However, US President Joe Biden said his Chinese counterpart Xi Jinping had agreed to abide by the “Taiwan agreement”.

Mr Biden appeared to be referring to Washington’s longstanding “one China” policy under which it recognises China rather than Taiwan.

What other subjects did Jake Sullivan talk about?
In the BBC interview, Mr Sullivan also urged Russia not to exploit the growing energy crisis.

He said Moscow had in the past used energy as “a tool of coercion and a political weapon” – but any attempt to use the situation to its advantage would backfire on Russia.

Mr Sullivan also warned the British government that suspending the Northern Ireland Protocol to the Brexit deal would be a “serious risk to stability”.

He said any possibility of a return to a hard border between Northern Ireland and the Republic of Ireland was “of serious concern to the US”.

During Brexit negotiations, all sides agreed that protecting the 1998 Northern Ireland peace deal (the Good Friday agreement) was an absolute priority.

And asked how long the US would wait while Iran delayed the resumption of talks on reviving a 2015 nuclear deal, Mr Sullivan said: “We’ve just heard… that Iran is prepared to come back in a matter of a few short weeks, if that turns out not to be the case, then we will have to consult with allies and partners on a different way forward.

“If it does turn out to be the case, then we will see quite quickly whether the Iranians are serious at the table or whether they’re simply coming to stall and delay for time. That’s not a game that we’re going to play.”

Mr Sullivan stressed that the US was “determined to prevent Iran from getting a nuclear weapon. And we will use all the tools at our disposal to make sure that they do not”.

In 2015, Iran reached a deal with six powers – the US, UK, France, China, Russia and Germany – that saw Tehran limit its nuclear activities in return for sanctions relief.

But the US abandoned the agreement in 2018, raising fears that the deal would collapse completely.

Fri Oct 8 , 2021
Support Village Voice News With a Donation of Your Choice. A suicide bomber has targeted a mosque in the northern Afghan city of Kunduz during Friday prayers, killing at least 50 people, local officials say. Images on social media showed bodies and debris inside the mosque, used by the minority Shia Muslim community. No group has yet claimed responsibility for […]