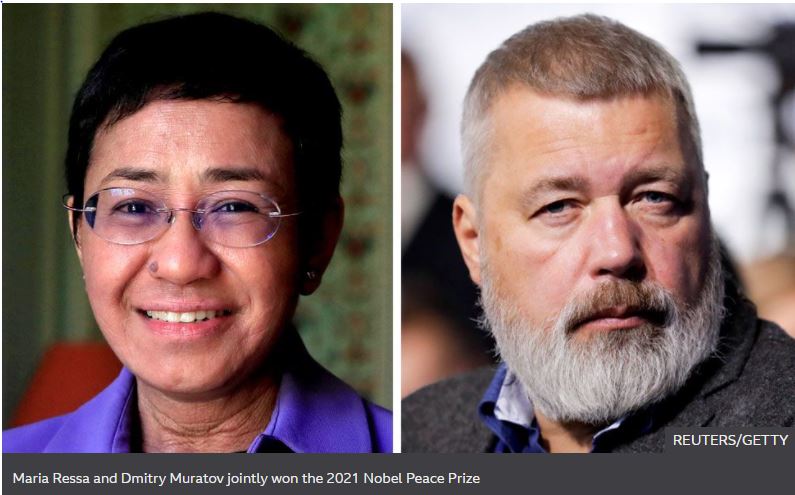 Journalists Maria Ressa and Dmitry Muratov have won the Nobel Peace Prize for their fights to defend freedom of expression in the Philippines and Russia.

The Nobel committee called the pair “representatives of all journalists who stand up for this ideal”.

The winners of the prestigious prize, worth 10m Swedish krona (£836,000; $1.1m), were announced at the Norwegian Nobel Institute in Oslo.

They were chosen out of 329 candidates.

Why do the Nobel prizes matter?
Ms Ressa, who co-founded the news site Rappler, was commended for using freedom of expression to “expose abuse of power, use of violence and growing authoritarianism in her native country, the Philippines”.

In a statement, Rappler said it was “honoured and astounded” that its chief executive had been given the prize.

“It could not have come at a better time – a time when journalists and the truth are being attacked and undermined,” it said.

The Nobel committee said Mr Muratov, the co-founder and editor of independent newspaper Novaya Gazeta, had for decades defended freedom of speech in Russia under increasingly challenging conditions.

In an interview with the popular Telegram channel Podyom, Mr Muratov said: “I’m laughing. I didn’t expect this at all. It’s madness here.”

He called the prize “retribution for Russian journalism which is being repressed now”.

The editor was congratulated by Kremlin spokesman, Dmitry Peskov, who said: “He persistently works in accordance with his own ideals, he is devoted to them, he is talented, he is brave.”

The Nobel Peace Prize is intended to honour an individual or organisation that has “done the most or the best work for fraternity between nations”.

“Free, independent and fact-based journalism serves to protect against abuse of power, lies and war propaganda,” the committee said in a statement.

“Without freedom of expression and freedom of the press, it will be difficult to successfully promote fraternity between nations, disarmament and a better world order to succeed in our time,” it added.

What do we know about the winners?
Maria Ressa co-founded the news site Rappler in 2012. The site now has 4.5 million followers on Facebook, and has become known for its intelligent analysis and hard-hitting investigations.

It is one of the few Philippine media organisations to be openly critical of President Rodrigo Duterte and his policies.

Rappler has published extensively on the populist president’s deadly war on drugs, as well as taking a critical look at issues of misogyny, human rights violations and corruption. Ms Ressa has personally reported on the spread of government propaganda on social media.

Ms Ressa has faced numerous legal cases, which she says are politically motivated. The government has maintained their legitimacy.

Local journalist Ellen Tordesillas told the BBC last year that Ms Ressa was “admired as one of those who stood up to Duterte”.

Dmitry Muratov co-founded Novaya Gazeta in 1993 and has since worked as its editor. Novaya Gazeta is one of the few remaining newspapers in Russia to be highly critical of the ruling elite, particularly President Vladimir Putin.

Published three times a week, it regularly runs investigations into alleged corruption and other malpractice in ruling circles, and highlights the plight of people it considers victims of official abuse.

Six of its reporters, including Anna Politkovskaya, have been murdered because of their journalistic work, according to the Committee to Protect Journalists.

The newspaper is also subjected to threats and harassment, including over its reporting of human rights abuses in Chechnya.

Who has won previously?
Ms Ressa and Mr Muratov are the 102nd winners of the prize.

Last year’s winner was the United Nations World Food Programme (WFP), which was awarded for its efforts to combat hunger and improve conditions for peace.

Former US President Barack Obama won the prize in 2009, for “his extraordinary efforts to strengthen international diplomacy and co-operation between peoples”.

Other notable winners include former US President Jimmy Carter (2002); child education activist Malala Yousafzai (shared 2014); the European Union (2012); the United Nations and its secretary-general at the time, Kofi Annan (shared 2001); and Mother Teresa (1979).

Fri Oct 8 , 2021
Support Village Voice News With a Donation of Your Choice. A US nuclear submarine hit an “unknown object” while submerged in waters in the Asia-Pacific region, injuring a number of sailors, US officials say. It was not clear what caused the incident on Saturday, they said. The submarine remained “fully operational”. Unnamed officials told US media the collision happened in […]