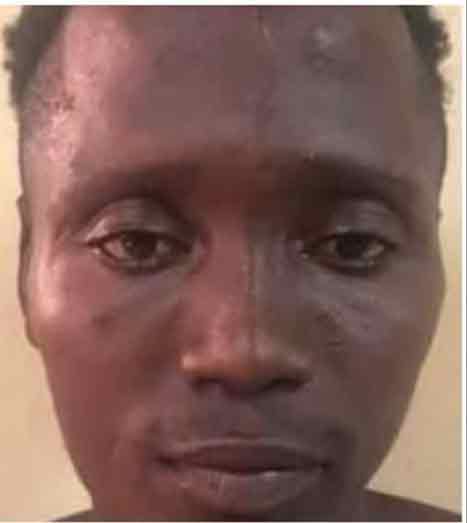 …tells attorneys that he was coerced into signing confession statement

Clarence Greene – the 26-year-old man accused of setting the Brickdam Police Station on fire – told his attorneys that after being beaten on his shoulder with a baton by a senior police officer in the interrogation room, he was forced to ‘confess’ to a crime he did not commit.

In fact, Greene, through his Attorneys –  Ronald Daniels and Kiswana Jefford – is contending that he was threatened to sign a statement without first reading its contents, and had no knowledge that it was a confession statement he was presented with.

“He said having experienced the hits on the shoulder…he said he felt compel, under those circumstances, to sign that paper,” Daniels said on Tuesday during his appearance on ‘Straight Up’ a radio programme hosted by Mark Benschop on 107.1FM.

Greene is alleging that throughout all of the interviews and interrogations with the police, he maintained that he did not start the fire that gutted the Brickdam Police Station last Saturday.

One day after the fire, the Guyana Police Force, in a statement, said Greene, in a confession statement, indicated that while being held in a cell at Brickdam, he used a sponge, a lighter and a piece of wire to start the fire in another room which contained a number of documents.

But Greene, who was initially picked up by the police on Saturday morning for armed robbery, is denying the allegations being levelled against him. Daniels and Jefford said during their interaction with Greene on Tuesday, he presented a consistent narrative, in which he not only maintained his innocence but detailed, in chronological order, the events that unfolded on Saturday.

Greene, through his attorneys, said following his arrest on Saturday morning, he was taken to the Brickdam Police Station where he was searched thoroughly by the police there. According to the attorneys, no lighter or any flammable item was found on Greene.

He was subsequently placed into Cell No. 4 by himself. At the time, the cell had half of a mattress, and Greene reportedly informed the police that he had steel in his back due to an injury he received during an accident and it would therefore be difficult for him to sleep on the mattress. He was subsequently given another mattress, however, the torn mattress was also left in the cell.

Greene told his attorneys that approximately one hour after, he started smelling smoke, and he quickly raised an alarmed but the police officers on duty did not respond to his calls.

“He alerted the prisoners, who were in the cells next to him that he was smelling smoke. So the prisoners joined him in raising the alarm,” Daniels detailed.

It is alleged that sometime after, a police officer went up to the cell block to allow another prison to use the washroom. It was during that period that Greene reportedly fell asleep.

“He said a while after he was woken up by water being thrown on him and he discovered that it was the guy who was let out to use the washroom, somebody he is familiar with. He said that the guy alerted him that smoke was coming in the cell that he was in, so they raised an alarm again and he went down stairs and he alerted the police,” Daniels told Benschop.

The police subsequently returned and opened Greene’s cell. “He said that he immediately darted out of the cell and rushed to the washroom area. He took off the vest he was wearing…and he said he plugged the water escape route in the bathroom with his vest and he turned the pipe on so the bathroom can start fulling, and took a bucket from the bathroom and he fill it water and he ran back to the cell; he said he kept doing this back and forth,” Daniels further detailed.

Greene told his attorneys that eventually, all the prisoners were removed from the lockups and placed into other rooms and buildings before being transferred to the Sparendaam Police Station.

It was noted that every time the prisoners were moved, they were thoroughly searched, and at no time did the police find any flammable item on Greene. “He said nothing was found on him, nothing that was capable of starting a fire was found on him,” Daniels said.

According to Greene, while being transferred to the Sparendaam Police Station by four police officers, the prisoners in the bus were talking about the fire. He said it was then that the prisoner who woke him up, indicated that upon his arrival at the cell, he too was smelling smoke.

Jefford said once Greene got to the Sparendaam Police Station, the police informed him that he would be required to give a statement. She said in that statement given to police, Greene maintained that he had no knowledge of how the fire started.

On Sunday, Greene was reportedly taken to the CID Headquarters at Eve Leary, where a number of allegations were put to him during an interview with the police. He, however, maintained his innocence.

“He was taken into a room with identifiable senior police officers and while in that room, he was asked to recount what transpired, and he maintained his narrative which he insists is true and correct,” Daniels added.
Greene told his attorneys that at the time, one of the senior officers was hitting a baton on his desk in a threatening manner, and repeatedly told him that he was telling lies.

A confrontation between Greene and another prisoner subsequently took place, and it was during that confrontation that the prisoner accused the 26-year-old of confessing that he was responsible for the fire. But Greene maintained his innocence.

A recorded video interview was then conducted with Greene. He reportedly said that after the interview ended he was instructed by the police to sign a statement, though not being presented with the opportunity to read it thoroughly. Greene told his attorneys that he did so out of fear, and that he had not read the contents of the statement.

But even as Daniels and Jefford spoke to Benschop, the Guyana Police Force (GPF) released a statement dismissing as malicious allegations that Greene was coerced into giving the confession.

“…since the said confession was given on video and it is clear that the suspect was under no form of duress at the time he explained to the police how he started the fire,” the police said.

They added: “One can only infer that these unsubstantiated attacks on the integrity and professionalism of ranks of the Guyana Police Force is nothing more than an attempt to undermine the investigations. However, based on police procedures, the evidence of the video confession would be prepared for court presentation.”

The police said the Force is sparing no effort as it continues the investigation into Saturday’s devastating fire which destroyed the Brickdam Police Station complex. It maintained that investigators are in possession of a confession (ON VIDEO), and not on paper as claimed in the report.

To applause and laughter, PM Johnson vows to reshape Britain

Wed Oct 6 , 2021
Support Village Voice News With a Donation of Your Choice. MANCHESTER, England, Oct 6 (Reuters) – Prime Minister Boris Johnson vowed to radically re-shape Britain on Wednesday, exhorting his Conservative Party faithful to help the government press on with tackling regional inequality by ending “long term structural weaknesses” in the economy. In a speech to end his party’s annual conference, […]