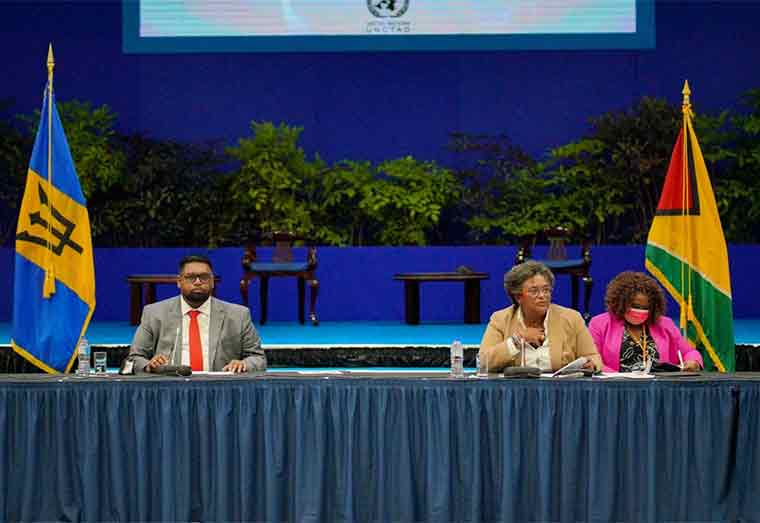 As soon as possible, Guyana and Barbados are seeking to strengthen their relationship so that both countries can benefit in the areas of agriculture and fisheries, oil and gas, mining, forestry, tourism and hospitality, transportation, housing and water resources.

President Irfaan Ali and Prime Minister of Barbados, Mia Mottley had high-level discussions on the same at the Lloyd Erskine Sandiford Conference Centre, Bridgetown, Barbados on October 4, 2021. They were accompanied by their Ministers and Senior Government officials and members of their respective Private Sectors.

The Guyanese delegation was in the country to attend the opening of the Fifteenth Session of the United Nations Conference on Trade and Development (UNCTAD 15) but also used the occasion to meet with the leaders of Barbados.

According to a joint statement shared with the media, both President Ali and Prime Minister Mottley have indicated their desire for a “new paradigm” in their relations that will allow both countries to benefit from an expanded programme of cooperation.

At the meeting, significant attention was paid to exploring how the agriculture potential of Guyana and Barbados could be utilised to reduce food importation bills as part of the overall regional food security plans.

It was agreed that a monitoring mechanism would be put in place to oversee the implementation of an action plan.

“The Heads of Government encouraged the members of their private sectors to become more aggressive in taking advantage of the opportunities that should be seen not as competitive but providing a measure of complementarity that would be a win-win for both sides. They stressed the urgency with which both countries needed to move forward,” the statement indicated.

They expressed a determination to succeed with a model for the region built on enhanced trust and cutting through bureaucracy to achieve their objectives within the shortest possible time for implementation.

At the engagement, Prime Minister Mottley conveyed her sincere gratitude to President Ali for travelling to Barbados with his delegation to attend the UNCTAD 15 opening session and to engage in substantive talks with her and her delegation.

Meanwhile, President Ali expressed his sincere appreciation to Prime Minister Mottley for the warm welcome received and for the kind hospitality extended to him and his delegation by the people of Barbados.

Wed Oct 6 , 2021
Support Village Voice News With a Donation of Your Choice. Residents and businesses in Ameila’s Ward, Linden will become the latest in Guyana to access GTT’s Fibre internet service, as the telecommunications company expanded its cutting-edge broadband technology to Region Ten. The Ameila’s Ward, Linden roll-out keeps GTT on course to achieving its goal of “Reliably Connecting our Customers” by […]