And this pandemic, of mortalities and morbidities, has certainly brought to the fore the nefarious political vultures, who prey on the vulnerable. For what we saw and heard was disquieting to say the least, watching them reduced human life to political footstools, being most distressing.

For it was billed the mother of all elections, so it was inevitable that tensions would’ve been thicker than Chinese smog. Further, it lends to reason that the impasse would’ve been on tenterhooks, such that the misjudged utterance or action, could’ve meant exsanguination. But that was inconsequential to the cold-hearted many, whose perilous shenanigans we visualised, internalised, albeit unable to rationalise. And for this, the depraved agent provocateur in question, most amphibiously cold-hearted, was the megalomaniac and cheeky attention seeker, Lewd Showman. For his deportment said it all- A distasteful delusion of grandeur, which fuelled his misplaced convictions that being phenotypically Indigenous, a free pass is his to Propagandise, Pander and Patronise. Thus edify I must. We as a people, with whips on our backs and shackles on our ankles, toiled these lands, yet special privileges we never favour.

But those grim days we counted and still count are symptomatic of a depraved mind, not respecting the sanctity of human life. For his actions evidenced a skull devoid of cognitive neurons, a prehistoric homo habilis cocooned in fool’s paradise, and a twisted mind of cartoonish conviction that blue blood resides beneath his epidermis. So, as we die and tearfully mourn, without empathy he prognosticate to agitate with confabulates, that Guyana was of Covid-19 armageddon. But this attention seeker, in both word and wear, we all know to crave eyes and more eyes, with knees approximating the soil, beseeching the International Community to Afghan-airlift the Covid-19 fearful from Mr. Granger, who flatly rejected him. And being deemed inconsequential, the anencephalics he counted, who salivated over his google searched Covid-19 mortality graphs, in repairing his Granger bruised ego. In fact, after all his hullabaloo, what he plotted on those graphs, no pun intended, was of 22 deaths over five months.

But now the Covid-19 armageddon is upon us, averaging 70 deaths per month, anhedonia and amnesia have overtaken him. Now that we’re living and dying in this Covid-19 apocalypse of 62 deaths in 13 days, he proffers that pittance be denied us. Now that PPP having scored their maiden Covid-19 century, of the unvaccinated refusal to play ball, he chastises. Now with PPP having promoted the numerical tweaker to deputy sleeper, sleep is all he does. For what he fabricated to create under APNU-AFC, we have heartbreaks to cremate under PPP.

But such egotist shan’t be of unlimited time since historically, minions who expose, are further expose with the inevitable political throes. And for his naked opportunism, pun intended, capitalising on vulnerabilities for political gains, he’ll forever be south of my respect barometer. But pause we must, for our numbers shall speak.

Death data
For our known and their unknown is of outliers, which aren’t reflective of trends, being set aside to avoid statistical contamination. Thus, with discerning eyes on the data thereunder, Haiti is of minimal vaccination yet of minimal deaths. For this paradox and standalone outlier, evidences a collapsed Health Care System, of no testing, vaccination and certification.

Now the data we revisit, that they rather not see, thus leaving us to see and solve the high deaths per capita of Guyana, Bahamas, Trinidad, St. Lucia and Grenada. And deciphering the enigma, meant vaccines must be interrogated. Vaccination rates? WHO approved? 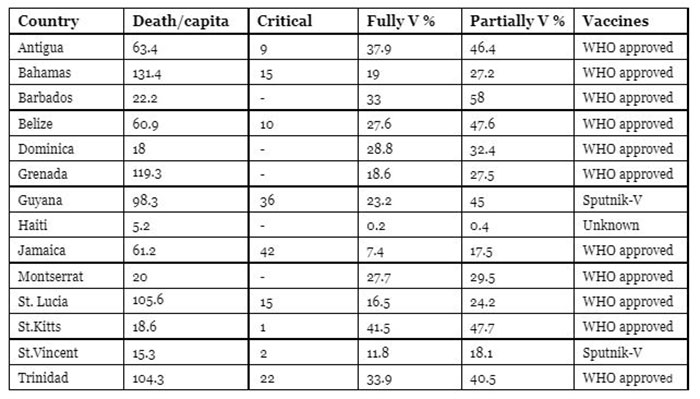 Paradox explained.
For the explanation of PPP high death rate despite high vaccination rate, is of binary aetiologies;

Human intrinsic factors; which shall be first interrogated.

Unvaccinated?:  And concurred we’ve that denied WHO approved vaccines renders Covid-19 susceptible and transmission. But PPP is with unapproved vaccines, no public education, no public health measures, or consultation, so the blame they must shoulder.

Fully vaccinated immunocompromised and high-risk: Indeed booster they do need but PPP denied. PPP to blame.

And the extrinsic factors

For they were numerously many, worried sick over 22 Covid-19 deaths in 5 months. Thus, to the Jim Jonesian of the Private Sector Crooks, they delegated misinformation irresponsibilities, for the mislabelled Covid-19 catastrophe, of binary dis-solution.

APNU+AFC must concede to invalid votes.

And once conceded, the International Community will mass rescue, from the “Covid crisis” of 4 deaths per month. Now with objectives achieved, the malodour of 70+ Covid-19 deaths per month, is breathable.

Then our Noble Laureate and national treasure whose comportment betrays his university dropout status. For a lady had expressed her opinion on hospital barricades, thus with her Covid-19 death, to social media he rushed, to desecrate the dead in defence of PPP lockout policy, even before addressing overnight halitosis. But tempted I was, to engage the anencephalic on matters of medical ethics and human rights, but cautioned I was that sub-educated do have to earn their keeps.

And it’s the aforestated that have sadden our deportment on September’s record 150+ Covid-19 deaths. For those who falsified concern in 2020, is no longer of 2020 vision in 2021. The fact is, PPP has the fifth highest death rate in the Caribbean. PPP is vaccinating with unapproved vaccines. The crisis is worsening by the day. Yet silent they’re, albeit vocal with 4 APNU-AFC deaths per month. For this evidence that they care not about the dead or living. They care only for power.

But to their eyes I’ll present why we’re dying;

A large cohort of immunocompromised and high-risk without booster

And despite voluminous evidence to the contrary, the Covid failures blame the unvaccinated, even as their once vocal apologists remain silent. Dead silent.

Sun Oct 3 , 2021
Support Village Voice News With a Donation of Your Choice. By Rawle Lucas Growth in Market Capitalization Four stocks in the Lucas Stock Index (LSI) traded this final period of September 2021 with one of them registering a gain. The stock price of DTC rose 6.667 percent and added G$2.340 billion to the LSI this week. With the traded shares […] 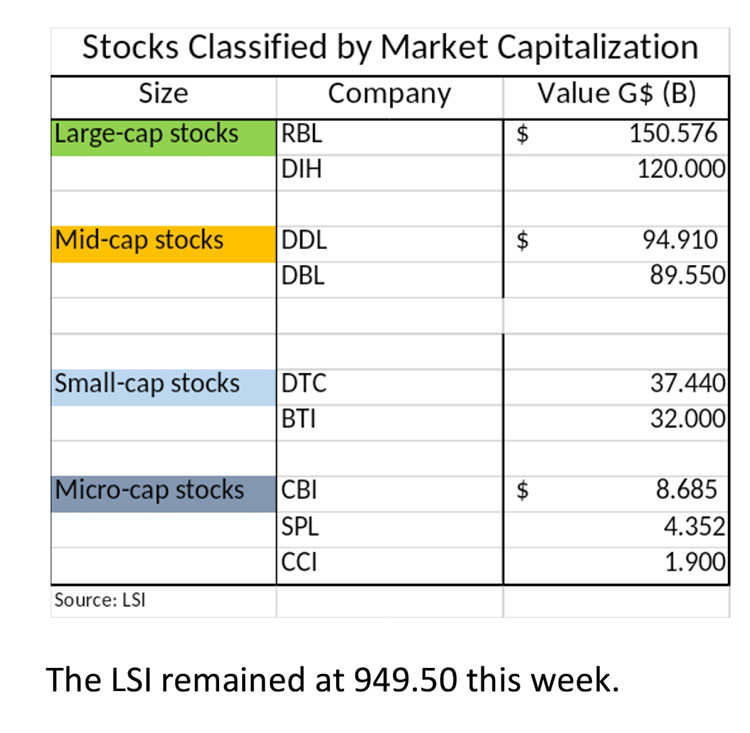